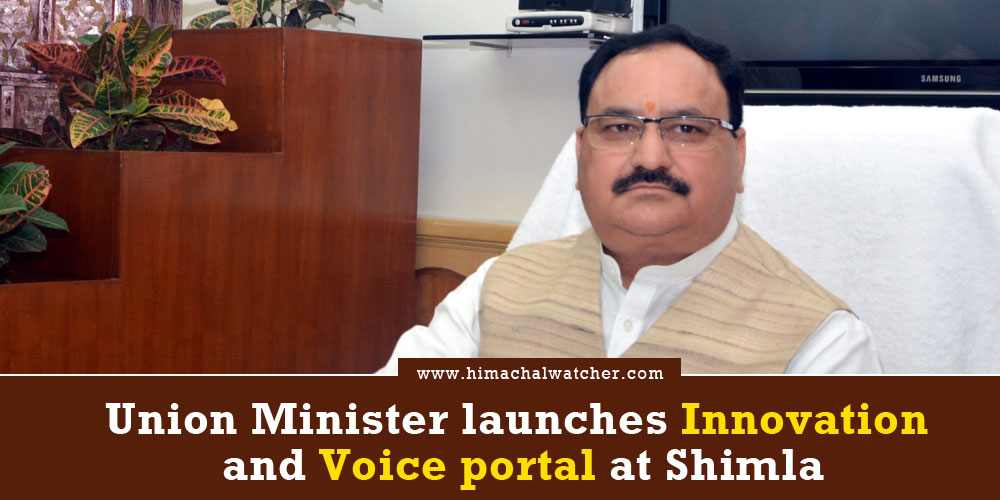 Union Health Minister Jagat Prakash Nadda said all possible help would be extended to Himachal Pradesh in health sector and there would be no paucity of funds to the state under the National Health Mission (NHM).

Nadda along-with Health Minister Kaul Singh Thakur launched ‘Innovation Portal’ under NHM and ‘Voice Portal’ based on health services. Under the voice portal any person would be able to get any information pertaining to health issues by dialing toll free number 1800-180-1104. The facility would be available in Hindi and English along-with other regional languages.

The Union Minister said the immunization programme had been launched in the country for prevention of various diseases which had turned out to be the biggest campaign in the world adding that previous governments had also played important role in making this campaign a big success. Now, the target had been fixed to increase the immunization programme from 65 to 90 percent under Inderdhanush Mission.

He said health sector was vital part of Swaach Bharat Abhiyan and the union government had taken initiative for assessment of sanitation in health institutes and hospitals under ‘Kayakalp’ programme.

He said tele-medicine services had been started in Lahaul-Spiti district of the state so as to provide best health care services in the tribal areas. He added these services would soon be started in 25 more health institutes of the state.

He said dialysis units had been made functional in Dharamashala and Mandi hospitals and soon Solan hospital too would get this facility.

Kaul Singh said the state government had opened 11 new civil hospitals, 11 community health centres, 39 primary health centers and six sub-health center’s during last two and a half years. Efforts were being made to strengthen the health infrastructure in the state and posts of doctors, paramedics and other staff were being filled up on priority. He informed 595 posts of medical officers, 58 specialist doctors, 378 nurses, 112 pharmacists, 97 operation theatre assistants and 19 posts of paramedical staff had been filled up during this period and approval had been granted to fill up 100 more posts each of doctors and nurses and 200 posts of paramedical staff.

He urged the union government to maintain the special category status for Himachal Pradesh and providing liberal financial assistance.

CM directs to speed up work on Theog-Kharapathar-Hatkoti road