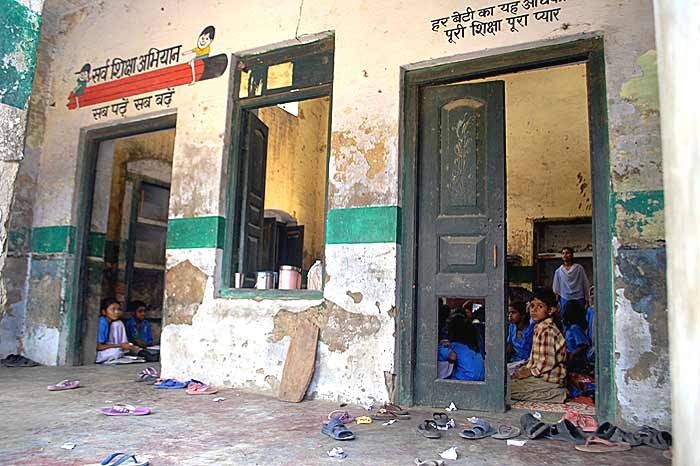 SHIMLA- About 200 state-run primary schools in Himachal Pradesh have no teacher at all. Fifty per cent of Class 5 students in government schools are not able to comprehend textbooks meant for Class 2 students and cannot solve three-digit problems, so say many of the state’s legislators.

Concerned over the declining standards of education at the primary and elementary levels, the legislators, cutting across party lines, have demanded in the assembly reforms in the education system to check further decline.

Hailing the Allahabad High Court judgment of August 18, two of them – one from the opposition BJP and other from the Congress – demanded that politicians, bureaucrats and judges must also send their children to government schools. This is the only way, the court said, that the pathetic state of government schools in the state could be improved.

Chief Minister Virbhadra Singh, who is known for his reforms in education, favours reviving the British system of carrying out inspections of educational institutions to improve the standard of education.

If BJP member Inder Singh, who moved the resolution that was later rejected by a voice vote, is to be believed, 107 primary schools in the state have only one or two students each. Likewise, 943 schools have a single teacher and 200 schools don’t even have a teacher. But that has not prevented the chief minister from going on a spree of opening new schools, he said.

“The percentage of children studying in government schools came down to 58 per cent last year from 90 per cent in 2003.”

The ex-serviceman-turned-politician believes the total ban on mid-term transfers, starting lower kindergarten and upper kindergarten classes in government schools, introducing English from Class 1 and re-introduction of the pass/fail system till Class 8 will help check a further dip.

“The Allahabad High Court has given a historic decision. It should be followed in the state too and then the standard of education will improve,” Inder Singh added.

The Congress’ Asha Kumar, a former education minister, said nobody wanted to serve in the remote areas. She suggested that the government also set up cluster and model schools with residential facilities.

Another former education minister, I.D. Dhiman of the BJP, suggested pre-primary schools that will help increasing enrollment in government schools.

Hailing the Allahabad High Court decision, Congress member and Deputy Speaker Jagat Singh Negi, who belongs to remote Kinnaur district, said it should also be made mandatory for the children of teachers and lecturers to get admission in government schools.

Only then, he said, would the standard of education improve.

Quoting a 2012 education report of NGO Pratham, the BJP’s Hans Raj, a former lecturer, said 50 per cent of Class 5 students in government schools are not able to comprehend textbooks meant for Class 2 students.

Replying to the resolution, which was rejected with a voice vote, the chief minister said there were inspectors of schools during the British days whose job was to do just that. “We need to have school inspectors. Their duties should be to test the students’ level of education and that of the educational institutions. They should conduct surprise checks,” he added.

Admitting that the country’s education system is not a role model, the chief minister, who is at helm for the sixth time, noted: “I can say education is much better than what it was before. I will like that in future the state should be an example for other states.”

Virbhadra Singh, who holds the education portfolio, said five schools would be developed and granted the status of smart schools. He said he did not mind opening a new school in far-flung areas, even if there were just two students.