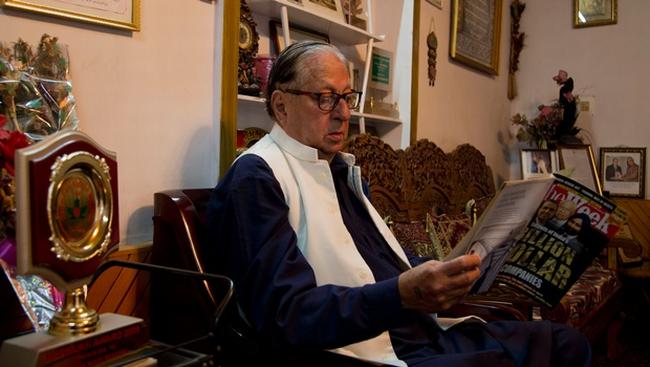 India’s literary community is disgusted. Dozens of writers say every day brings more evidence of intolerance and bigotry going mainstream — a man lynched allegedly for eating beef, an atheist critic of Hindu idol worship gunned down — all met by a deafening silence from the government.

As of Wednesday, 41 novelists, essayists, playwrights and poets had returned the awards they received from India’s prestigious literary academy to protest what they call a growing climate of intolerance under Prime Minister Narendra Modi’s government.

The writers are also angry that India’s Sahitya Akademi, or National Academy of Letters, has said little about the murder of the well-known rationalist Malleshappa Kalburgi, an award-winning Kannada-language writer, gunned down in August for his writings against superstition and false beliefs.

The government has dismissed the writers’ protests, questioning their motives and accusing them of being politically motivated.

“If they say they are unable to write, let them stop writing,” culture minister Mahesh Sharma told reporters.

The writers say they cannot remain mute spectators to numerous incidents of communal violence, attacks on intellectuals and increasing curbs on free speech.

“It’s become a question of an individual’s right to speak, to think, to write, to eat, to dress, to debate,” said Maya Krishna Rao, a playwright and theater actress, who returned her award to the academy this week.

When Modi won a landslide victory in May 2014, many voiced fears of right-wing Hindu nationalism leading to communal violence and religious intolerance. Modi, who had spent years dodging allegations of failing to stop riots in Gujarat state in which around 1,000 Muslims died, assured the nation that he was prime minister for all and would work for everyone.

But the last year has seen a rising crescendo of violence by Hindu fringe groups, trying to force a regressive Hindu nationalism on all, causing fear among India’s minority communities. State governments ruled by the BJP have cracked down on cow slaughter, and even buffalo meat, a key source of protein for poor Muslims and lower caste Hindus, has become scarce. The ban on cow slaughter has given rise to Hindu vigilante groups and mob violence has risen. Last month a Muslim man was lynched in northern India over false rumors that his family had eaten beef for dinner.

On Wednesday, in response to persistent demands that the prime minister break his silence on the lynching, Modi said the mob killing was ” sad and undesirable,” but added that his government could not be blamed as the local administration was responsible for the state.

Last week, well-known writer Nayantara Sahgal returned her academy award, triggering the return of awards by other writers. Sahgal, a niece of India’s first prime minister, Jawaharlal Nehru, is known as a fiercely independent political writer who had crossed swords with her cousin and another former prime minister, Indira Gandhi, when she imposed a state of emergency in India in the mid-70s.

Referring to recent violence by Hindu groups, Sahgal said in an interview to The Indian Express newspaper that there was “an attempt to blow up the idea of India and to put in its place a kind of travesty of Hinduism, a kind of monoculture, which has nothing to do with Hinduism.”

Sahgal’s views are echoed across the literary spectrum.

“But that’s no more the case with the rise of Hindu rightwing BJP,” Khayal said in Srinagar. “For the past one year, the Indian state has become suffocating and extremely intolerant.”
The government was “now brazenly and institutionally backing this communal hatred,” he said, justifying his decision to return his award.

It wasn’t the first time that Hindu conservatives silenced an author or forced a book to be withdrawn.
In January, novelist Perumal Murugan went into hiding and said he had quit writing after his latest book sparked virulent protests.

Hindu nationalists organized weeks of demonstrations demanding that Murugan delete portions of the Tamil-language book because they found them offensive. Instead, the writer stopped writing altogether, his voice muted by the angry protests.

Last year, Penguin India decided to destroy all copies of historian Wendy Doniger’s book on Hinduism after an outcry. In 2011, the state of Gujarat banned Joseph Lelyveld’s biography on pacifist freedom fighter Mohandas K. Gandhi, after reviews suggested Gandhi had a homosexual relationship.

Writers who voiced support for Sahgal and other authors are facing the wrath of Hindu hard-liners on social media as well.

Internationally renowned novelist Salman Rushdie, who was born in Mumbai, said he had received nearly 10,000 hate messages after he came out in support of the writers. Rushdie said the government’s silence was allowing a new “degree of thuggish violence” in India.

BJP has often tried to distance itself from extremist fringe Hindu groups, but the failure to crack down has emboldened them.

“The prime minister remains silent about this reign of terror. We must assume he dare not alienate evil-doers who support his ideology,” Sahgal said in a letter to the academy while returning her award.