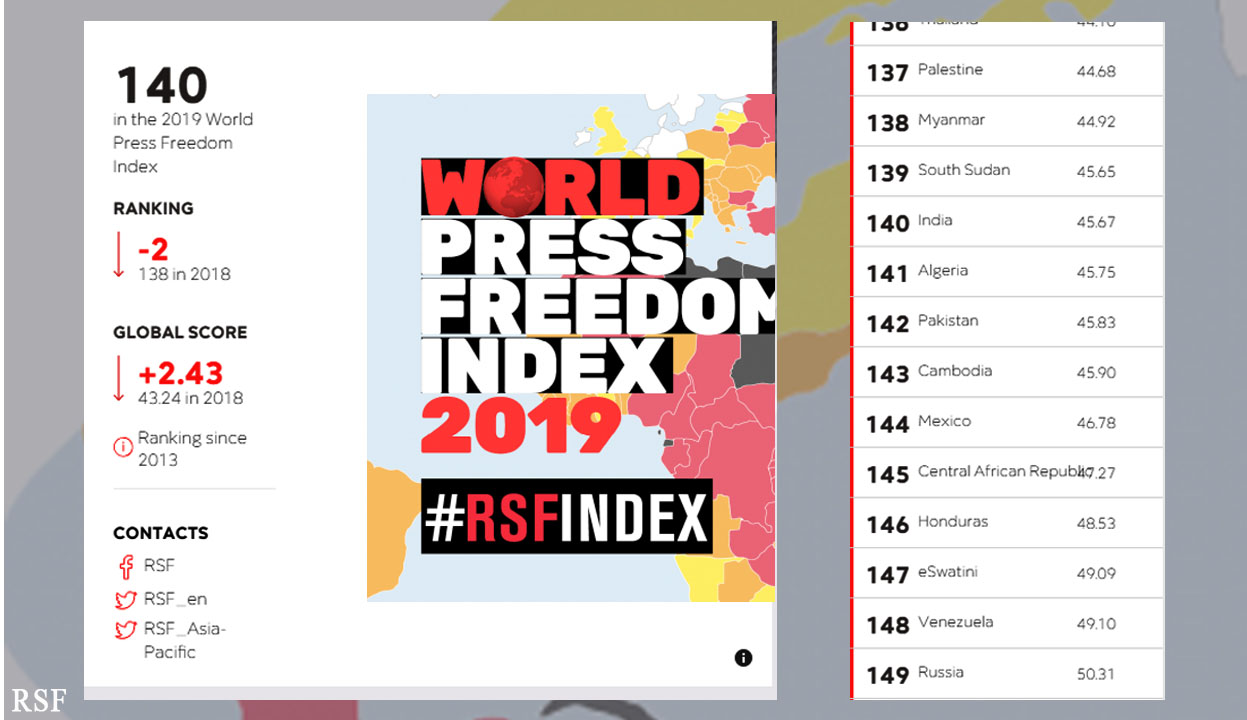 The 2019 World Press Freedom Index compiled by Reporters Without Borders (RSF) has been released today. As a matter of huge concern in the list of 180 countries surveyed, India has dropped down to 140th position from last year’s 138.  Norway was ranked at number one.

India has been placed close to Pakistan at 142, and Bangladesh at 150.

The overall findings showed hatred of journalists has degenerated into violence, contributing to an increase in fear. The number of countries regarded as safe, where journalists can work in complete security, continues to decline, while authoritarian regimes continue to tighten their grip on the media

As per the Index, threats, insults and attacks are now part of the “occupational hazards” for journalists in many countries.

“In India, where critics of Hindu nationalism are branded as “anti-Indian” in online harassment campaigns, six journalists were murdered in 2018,”

the RSF said in its Index.

Violence against journalists – including police violence, attacks by Maoist fighters, and reprisals by criminal groups or corrupt politicians – is one of the most striking characteristics of the current state of press freedom in India, the report said.

As per the RSF report, at least six Indian journalists were killed in connection with their work in 2018. A number of doubts surround a seventh case. These murders highlighted the many dangers Indian journalists face, especially those working for non-English-language media outlets in rural areas.

“Attacks against journalists by supporters of Prime Minister Narendra Modi increased in the run-up to general elections in the spring of 2019. Those who espouse Hindutva, the ideology that gave rise to Hindu nationalism, are trying to purge all manifestations of “anti-national” thought from the national debate,”

“The coordinated hate campaigns waged on social networks against journalists who dare to speak or write about subjects that aggravate Hindutva followers are alarming and include calls for the journalists concerned to be murdered. The campaigns are particularly virulent when the targets are women,”

Further, the RSF report said that the emergence of a #MeToo movement in the media in 2018 has lifted the veil on many cases of harassment and sexual assault to which women reporters have been subjected. It also said that criminal prosecutions are meanwhile often used to gag journalists critical of the authorities, with some prosecutors invoking Section 124a of the penal code, under which “sedition” is punishable by life imprisonment.

The mere threat of such a prosecution encourages self-censorship.

Coverage of regions that the authorities regard as sensitive, such as Kashmir, continues to be very difficult. Foreign reporters are barred from Kashmir and the Internet is often disconnected there,

It also suggested that when not detained, Kashmiri journalists working for local media outlets are often the targets of violence.