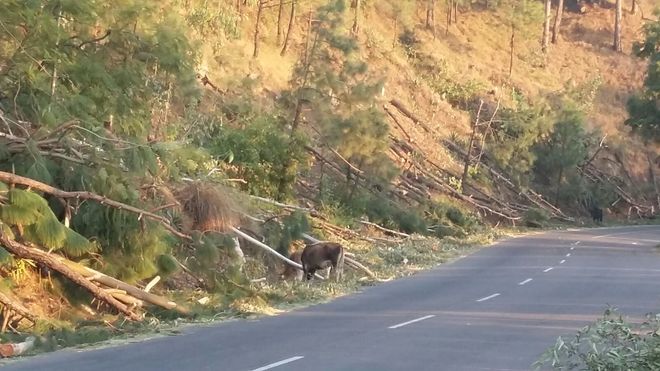 SOLAN- With the plantation in lieu of axing trees for four-laning of the Parwanoo-Solan stretch on the National Highway-22 yet to begin, the axing of thousands of trees will have severe impact on the climate in the area.

As many as 21,585 trees valued about Rs 8.75 crore will be axed for the first phase of four-laning the Parwanoo-Solan stretch of the NH-22. Tree felling is already under way and a time-frame of 90 days has been accorded to the contractor to complete the process.

The National Highways Authority of India has deposited Rs 3.02 crore for plantation with the Compensatory Afforestation Fund Management and Planning Authority (CAMPA). These funds are yet to be made available to the Forest Department to initiate afforestation activities on 131 hectares.

CAMPA is supposed to promote afforestation as a means of compensating for the diversion of forest land into non-forestry activities.

According to norms, afforestation has to be undertaken by the Forest Department on the degraded land – the size of which has to be double the forest land lost in the project. A large number of trees are being axed in the process.

Since the plantation is yet to take place, it will take several years for the plants to grow to a considerable level to mitigate the impact of environmental degradation

He added that parallel plantations should have been raised as soon as the project was approved so that by the time axing of trees was initiated, some green belt could have been created to act as a buffer.

Another issue of concern was the area where such afforestation activities would be taken up as it could mitigate the adverse environmental effects only if the sites are in the proximity of the national highway. Divisional Forest Officer, Solan, Ashok Chauhan said they would give projection for afforestation in the next financial year and this would be placed in the annual plan of the operation of the department. Funds would then be sought from CAMPA and they will initiate afforestation activities. 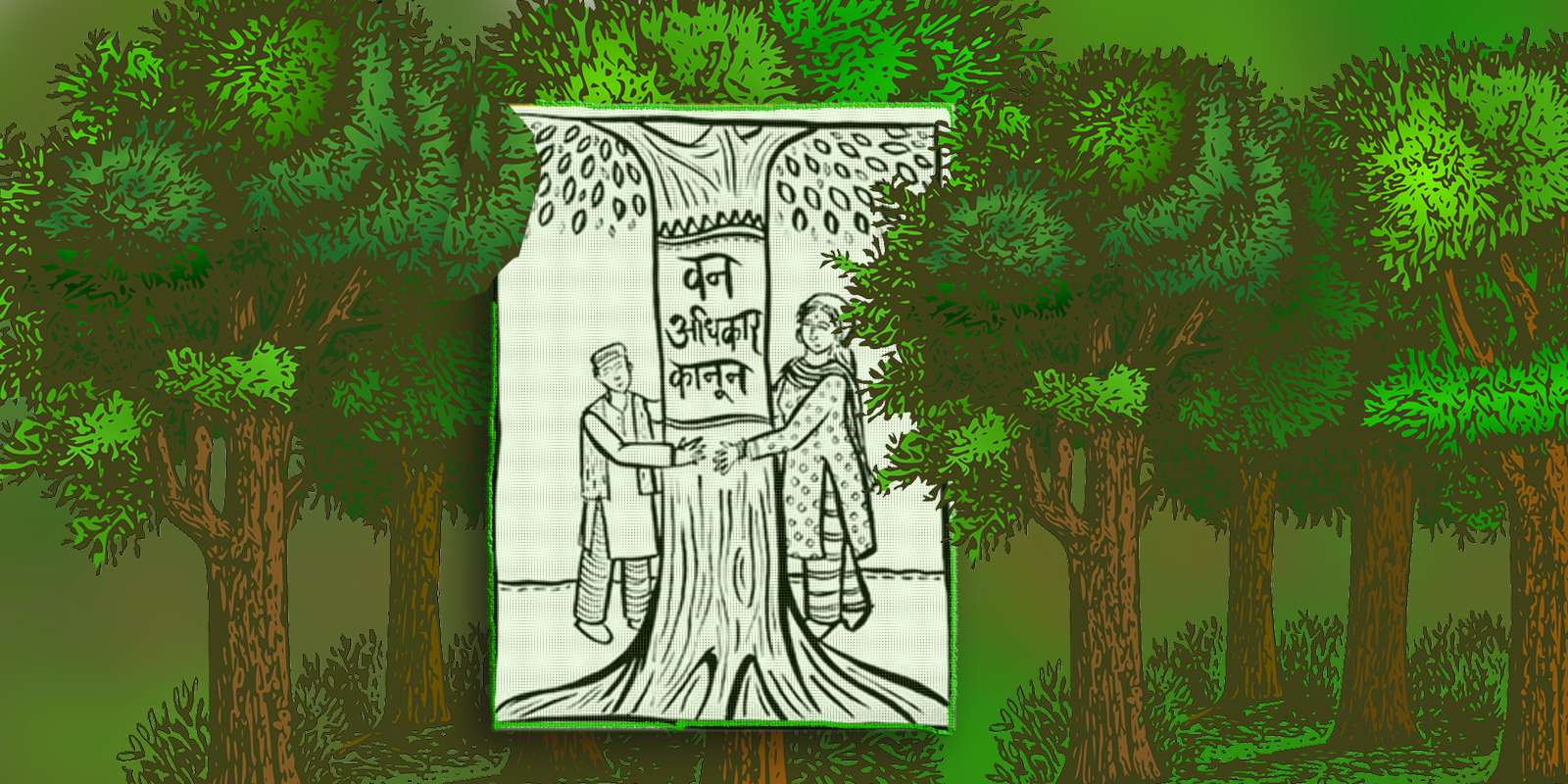 Shimla-‘Planting a tree to celebrate World Environment Day has been reduced to a symbolic tradition. But is this enough for the conservation of our ecology? The efficacy and use of plantation drives are being questioned all across the world today. These drives, especially when conducted by the government tend to be a wastage of resources due to poor survival rates, said environmental and community groups in Himachal Pradesh in a joint statement released recently on World Environment Day.

Further, trees are just one part of our ecosystem which comprises soil, grasslands, scrubs, wetlands, wildlife and even human beings, the statement said.

In India, especially in the Himalayas communities have co-existed with nature since times immemorial – dependent on it for day-to-day life and livelihoods, the groups said. Because of this connection between forests and local livelihoods and culture-communities across the landscape fought to protect the ecosystems they inhabit from destruction – be it the Chipko movement in Uttarakhand 50 years ago or the recent struggles in the tribal district of Kinnaur to highlight the ill-effects of dams and hydropower projects – indigenous and forest-dependent people have protected forest resources, they said.

“It is unfortunate then that these historical custodians of forests were labelled ‘encroachers’ and ‘thieves’ as their livelihoods were displaced from forests sometimes to build dams, highways and cities and at other times in the name of conservation were restricted from using the forests citing forest laws,” the statement said.

The groups said this has happened in Himachal too, where communities like pastoralists and farmers are slowly getting alienated from the forests. This jeopardizes their capacity to protect the forests too – whether from natural calamities like fires or indiscriminate felling.

Forest revival and afforestation programs, it is understood the world over, are only successful when local communities are made in charge and are given full access to use the forest and make decisions about its management.

“We have examples of community forest management like Gramya Jungles of Orissa and Van Panchayats of Uttarakhand. This became part of the Forest Policy in 1988 which is why programs like Joint Forest Management were planned for participatory governance of forests. However, in these too the forest department retained their control and communities were used as labour to plant trees,” the groups highlighted.

Based on these experiences and the repeated evictions of forest-dependent people from their rightful use it became apparent that there was a need for a law that recognised the community’s right to both use and protect/ govern the forest, they said.

It was after years of struggle that the Forest Rights Act 2006 was passed by the parliament of India. The Act recognises individual and community rights over any kind of forest lands for those dependent on these for their bonafide livelihood needs before 13th December 2005. The act also recognises development rights and community management rights. Himachal, where 2/3rd of the landscape is legally classified as ‘forest’ – there is a tremendous need and potential to implement this law to secure the land and livelihood rights of people on forest lands be they for fuelwood, fodder, pastures as well as farming and shelter.

The statement said today it has been 15 years since the passing of FRA but in Himachal, its implementation is in the doldrums.

“While 20 lakh forest rights claims have been accepted all across the country in Himachal only 164 claims have been recognised whereas 2700 are pending with the administration at various levels. The key reasons for the poor implementation include – lack of political will, misinformation about the act amongst the line officials, distrust of the people leading to non-filing of claims and inadequate awareness amongst common people,” the statement said.

It further said that, ironically, the state government has shown great enthusiasm in using this act to grant forest land for village development activities, the rest of the rights namely individual and community forest use and management rights are languishing due to state negligence and actively blocking the granting of these rights.

The groups further highlighted that in the last 5 years, community voices from Kangra, Chamba, Kinnaur, Lahaul-Spiti, Sirmaur and Mandi have been raising the demand for the implementation of this law in the state.  It was after this that the state government was forced to announce that it would implement the Forest Rights Act in a mission mode in the state in 2018. The tribal department also worked on training and making educational material on the act. However, these are yet to be properly distributed at the village level.

The joint statement further added that in March 2020 post the pandemic led lockdown the FRA implementation process received a setback. Even as gram sabha meetings and FRC processes came to a grinding halt the economy too got hit. During this time, it became evident more than ever that it is the land and forest-based livelihoods that are available to rural communities to fall back on for survival.

“Whereas the Government should be focused on strengthening land and nature-based livelihoods for the local communities. However, the focus of the state remains on pushing destructive commercial ventures in ecologically fragile areas and valuable farmlands of the state,” the groups said.

The coronavirus has taught the world what the climate crisis had already indicated – that we will continue to be victims of such crisis as long as the ecological destruction continues unabated, the statement said.

“This calls for a change in the model of ‘development’ which prioritises the basic needs and services rather than run blindly after economic growth which is meant to profit companies and contractors”, the groups said.

The statement also said that it is the communities who will now have to believe in their own capacity to manage lives and resources and also call the government to account if our natural resources have to be protected for future generations.

Image by OpenClipart-Vectors from Pixabay