SHIMLA- Siddharth Chauhan, an independent filmmaker from Shimla, has once again made Himachal Pradesh proud by taking his thought provoking and award winning short film to theatres.

His film ‘Boys Don’t Wear Nailpolish’ had first made news in February 2014 when it had won the Best Film Award at the International Short Film Festival of Kerala, which was just the beginning.

Now, this low budget film that was made in 2013 for an Indian film Festival has been selected for screening at the Paris Film Festival on 1st December 2015.

Siddharth has become the first independent filmmaker from Himachal Pradesh to have taken his locally produced films outside India. He has made some other short films as well and all of them are shot in Shimla. With it, Siddharth has taken Himachal’s local culture, talent and scenic beauty to the world screen.

Surprisingly, Sidharth has not received any professional training in this field, but still his films have been screened across countries like Sarajevo, England, USA, Belarus, Durham, Indonesia, New Zealand, Italy and now Paris; a monumental victory for the untrained 25 year old Shimla based filmmaker.

His film, ‘Boys Don’t Wear Nail Polish’ is set in the backdrop of the traditional Indian mindset and is a poignant, eloquent and stirring statement on a society where gender is reinforced in the mind of children from right from their birth. 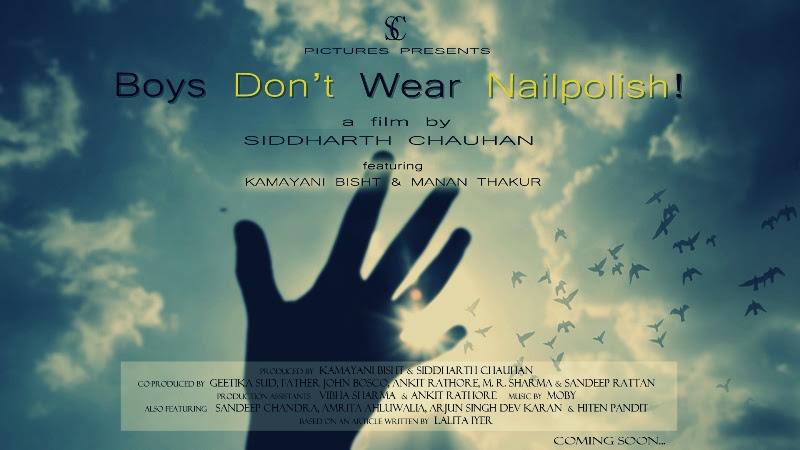 The film portrays a battle against gender-stereotyping in which a mother is fighting to protect her child’s individuality in the society.

The Film stars Ms. Kamayani Bisht, Assistant Professor of English at the Centre of Excellence Govt. College Sanjauli, Manan Thakur, and a class-2 student at St. Edwards School in Shimla. Film is completely made with the help of a local cast and crew.

Born in Renuka in 1990, Siddharth has never undergone any professional training in this field. He has studied Computer Applications and gained his degree in masters in Business Administration (MBA) from Himachal Pradesh University, Shimla.

Siddharth’s experimentation with films had started during his graduation, which continued in the coming years.

There after he made ‘The Infinite Space’, a fictional story of a Buddhist monk who dares to believe in the impossible, once again with local actors, crew and real life Buddhist monks. The film was selected by The University of Manchester, UK, for their film curation scheme in 2015 where the Selection Jury reviewed it as a film that “maintains the peace and serenity of Buddhism – there is a dramatic tension, but it doesn’t lose sight of the rhythms of the Buddhist day and nor does it veer into (Western) cinematic melodrama and sensationalism.” and called it a piece of “Excellent cinematic storytelling, Well Shot with some striking images”.

Siddharth is currently working on a few more scripts and readying for the release of his next film titled ‘PAPA’, starring Mohit Singh Parmar, an actor from Palampur, who has appeared in a Himachali film ‘Nath Bhajj’ and Sushma Kaul, H.O.D. Department of English at Bishop Cotton School, Shimla. The film is based on the complicated relationship of a disabled mother and her only son, who are adjusting to their lives after a terrible accident.