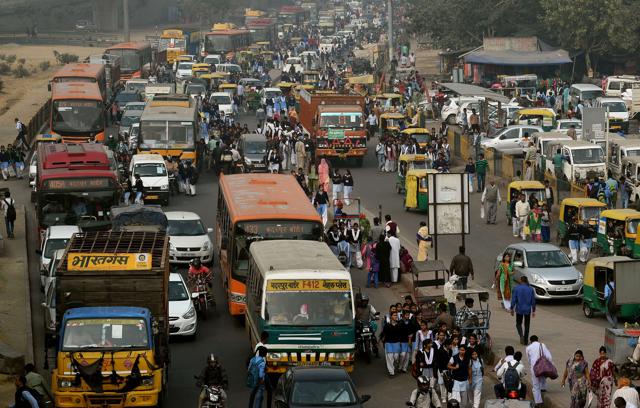 The decision was taken in view of the rising air pollution in Delhi. The city has been blanketed in grey smog, and while there is no reliable data on respiratory diseases, most doctors in the capital report a sharp spike in pollution-related illness during the winter months.

The Delhi government decided on Friday that odd and even number vehicles will ply on alternate days in the city from January 1, imposing Beijing-like restrictions in the national capital to curb rising pollution.

The decision, taken at a meeting presided over by chief minister Arvind Kejriwal, will not apply to CNG-driven buses, taxis and auto-rickshaws. It will cover vehicles entering Delhi from other states.

The sweeping move – like the one taken in the Chinese capital in 2013 – will apply to a large bulk of the some 90 lakh vehicles registered in Delhi, where about 1,500 new vehicles are added every day.

The city also plans to shut down one of its oldest and least efficient thermal power plants. The Badarpur plant, commissioned in the early 1970s, uses outdated equipment and often breaks down.

The government will also launch a web-based app which people can use to report about polluting vehicles in the capital.

The decisions came a day after the Delhi high court said that the national capital was like a gas chamber, and sought immediate action from the central and Delhi governments.

The court proposed a check on construction sites, implementation of a ban on waste burning and providing air masks to traffic personnel. It also directed the Centre and the Delhi governments to submit an action plan to deal with the problem in Delhi-NCR.

On Thursday, non-profit Centre for Science and Environment (CSE) had said that there has been a “sevenfold increase” in Delhi’s air pollution since October.

According to the Central Pollution Control Board, the air quality of Delhi is said to be “very poor” with an air quality index of 331.

When air quality index ranges between 301 and 400, the air is said to cause respiratory illness on prolonged exposure.

In October, the National Green Tribunal announced an “Environment Tax” or “Green Tax” on commercial vehicles entering the city.

The Delhi high court later ordered all private radio taxis to switch over to compressed natural gas (CNG) before March 1, 2016 if they desired to operate in the capital.

NGO Greenpeace warned recently that the indoor air in Delhi was five times more polluted than it should be according to Indian standards.

The WHO, however, says this is 11 times more than their prescribed level.

Several Chinese cities have slapped limits on car numbers because of congestion and pollution. But unlike Beijing, which also suffers from hazardous haze levels, New Delhi does not issue public health warnings.

The city has been blanketed in grey smog, and while there is no reliable data on respiratory diseases, most doctors in the capital report a sharp spike in pollution-related illness during the winter months.

Sunita Narain, director of The Center for Science and Environment, a Delhi-based research and advocacy group, said the government had responded “to a public health emergency.”

“I would like to thank the Delhi government,” she told reporters.