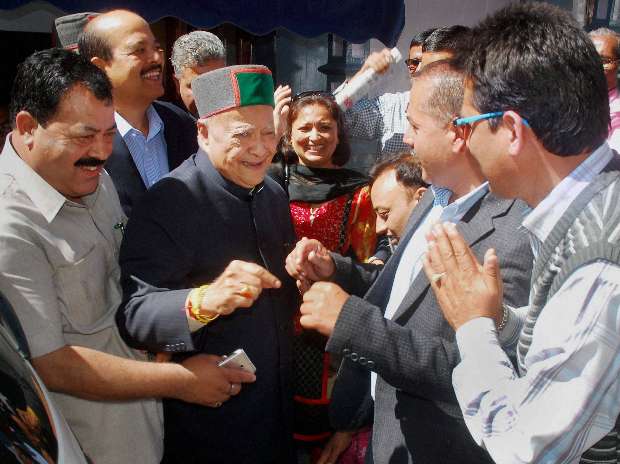 SHIMLA- The Central Bureau of Investigation on Thursday told the Delhi High Court that its investigation in the disproportionate assets case against Himachal Pradesh Chief Minister Virbhadra Singh and others has been “held up” because of the Himachal Pradesh High Court, which has put a restraint on his arrest.

The agency told a bench of Justice Pratibha Rani that Himachal Pradesh High Court’s interim order of October 1, 2015 restraining the CBI from arresting, interrogating or filing a chargesheet against Singh, was hampering their probe.

The interim order passed by the Himachal Pradesh High Court says that you (CBI) cannot interrogate him (Singh), arrest him or file chargesheet against him without its permission. Our investigation is being held up. It is hampering the probe

The bench, which posted the matter for April 4, was hearing Singh’s plea seeking quashing of an FIR lodged against him by CBI.

As the hearing began, Singh’s counsel sought adjournment and Patwalia said that a short date should be given in the matter.

To this, the bench said, “I cannot give you a short date. I will give date as per court’s diary.”

Patwalia, however, told the bench that he can argue the matter on Thursday itself and said,

Kindly hear me on the interim order today. I have never read this kind of order in my whole career. In default, they (Singh and others) are succeeding,

The CBI had earlier pleaded before the high court that it has jurisdiction to register and investigate the disproportionate assets case.

The agency had also sought dismissal of Singh’s plea to quash the FIR against him, alleging that his prayer was frivolous and not maintainable.

In his plea, Singh has claimed that CBI had overstepped its jurisdiction in filing the case and had also questioned how the agency could raid his premises when the case was already pending in the Delhi High Court, as also before the Income Tax Tribunal and other tax authorities, where all documents relating to his returns had been submitted.

On November 5, the Supreme Court had transfered Singh’s plea from the Himachal Pradesh High Court to the Delhi High Court, saying it was not expressing any opinion on the merits of the case but “simply” transferring the petition “in the interest of justice and to save the institution (judiciary) from any embarrassment”.

CBI had moved the apex court seeking transfer of the case from the Himachal Pradesh HC to the Delhi High Court and setting aside of the interim order granting protection from arrest and other reliefs to Singh.

The chief minister had filed a petition in the Himachal Pradesh High Court pleading that the searches on his private residence and other premises were conducted with “malafide intentions and political vendetta” by the central investigating agency.

Singh had sought directions from the high court to quash CBI’s FIR registered in Delhi against him and others under Sections 13 (2) and 13(1)(e) of Prevention of Corruption Act and Section 109 of IPC.

Despite High Court orders, disabled students in Himachal deprived of rights by Govt.

Over 15,000 Hepatitis-E cases from Shimla, Solan, Sirmaur, Jaundice should be declared epidemic: Opposition