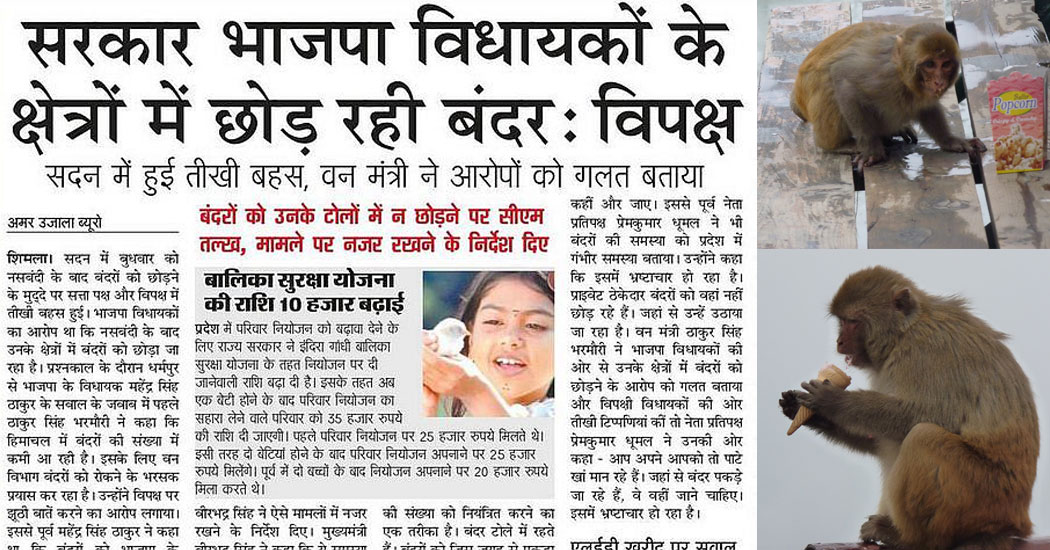 BJP members alleged that there was a deliberate attempt to release monkeys, after sterilisation, in the constituencies of opposition MLAs.

The issue was raised during Question Hour by BJP leader Mohinder Singh, who alleged that the government had failed to ensure that the monkeys trapped for sterilisation are released in the same area in a scientific manner. He claimed the animals were being released in the constituencies of BJP MLAs.

Refuting the charge, Forest Minister Thakur Singh Bharmouri said the Congress government did not believe in such “cheap” politics and added that during the rule of the previous BJP government, the monkeys were lifted and released in the lower hills of the state.

As arguments started turning acrimonious, Chief Minister Virbhadra Singh intervened and said that a private party had been engaged to catch and release the monkeys and there could be some chance of error which should be checked.

He said the right approach was that the monkeys should be caught and dropped back scientifically so that their group behaviour was not disturbed.

Earlier, replying to the main question, the minister said the monkey census had been conducted twice till 2016 and there was a decline in the count of primates in the state.

So far, 52,415 monkeys had been sterilised in the state and as a consequence, their population had come down.

The minister said the census of the blue bull (Nilgai) and pigs has not been conducted in the state so far.

He said eight sterilisation centres were functional in the state and also gave details of the places from where the monkeys were caught and released after sterilisation.

He said the High Court had declined to allow killing of monkeys and the matter would be taken up again with the court.