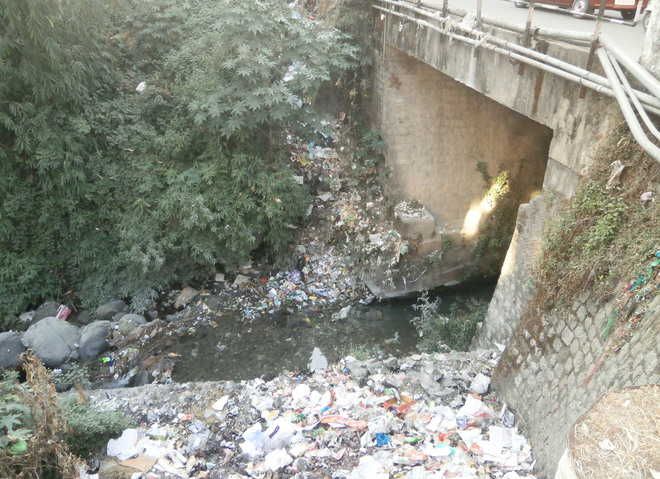 Garbage disposal plant at Ghuggar sub town of Palampur has failed to take off,One of the major problems being faced by the residents is removal and disposal of garbage.

SHIMLA- The much-awaited campaign by the local administration for the removal of garbage and to save the drinking water sources from contamination in Ghuggar sub town of Palampur has failed to take off. Ghuggar adjoining Palampur town is the largest panchayat of Palampur sub division with population of 11, 000.

Ghuggar has witnessed vast urbanization in the past 10 years and dozens of housing colonies have come up in the sub town, which lacks civic amenities.

One of the major problems being faced by the residents is removal and disposal of garbage.

SDM Palampur, Ajit Bhardwaj, took an initiative and recently convened the meeting of panchayat representative, NGOs and the residents of Ghuggar to chalk out a plan to make Ghuggar garbage-free and clean its drinking water sources. Block Development Officer was also called in the meeting.

It was decided in the meeting that in the first phase garbage would be collected from two to three wards and later entire panchayat would be covered.

However, till date the panchayat has failed to launch the campaign for door-to-door garbage collection. Member of the panchayats, while talking to media, said they had no financial resources to launch the campaign. Though they had formed a team for the purpose, the scheme could not be implemented due to lack of funds to buy the vehicles and create other infrastructure.

Unless funds were made vailable we are unable to go ahead,

Meanwhile, People’s Voice, a local NGO, at a meeting last night, urged the Deputy Commissioner Kangra to allocate funds for the purchase of vehicles so that panchayats could collect and dispose of the garbage. Neelam Sood, convener of the NGO, said not only in Ghuggar, garbage collection should be started in other panchayats of the Palampur town and the government should support these panchayats. She said the first step should be removal of all garbage dumps emitting foul smell.

She appealed to local MLA Brij Butail and MP Shanta Kumar to provide funds to the panchayats from their MLA/MP local area development funds at the earliest as after the onset of summer the situation would go from bad to worse.