SHIMLA-Amit Thakur, Dy. Superintendent traffic police Shimla, alleged a taxi driver of abusing and assaulting him with stick near Gurudwara at Shimla Cartroad during traffic checking at 9:30 PM on Wednesday. However, taxi driver claims the case to be other way round, and that it was the DSP who beat him while he was dropping passengers at the mentioned location and lathicharged the crowd that gathered and protested against DSP’s misbehave. The driver also alleged that the DSP smashed windows of his car. A case was filed by Shimla Police under Section 353, 332, 341, 504, 34, of IPC on the statement of Amit Thakur including assault on public servant to prevent him for discharging his duties.

It triggered protests among taxi operators who blocked the road and demanded that the official be suspended. The drivers blocked the road for more than an hour, forcing police to use force to disperse them. 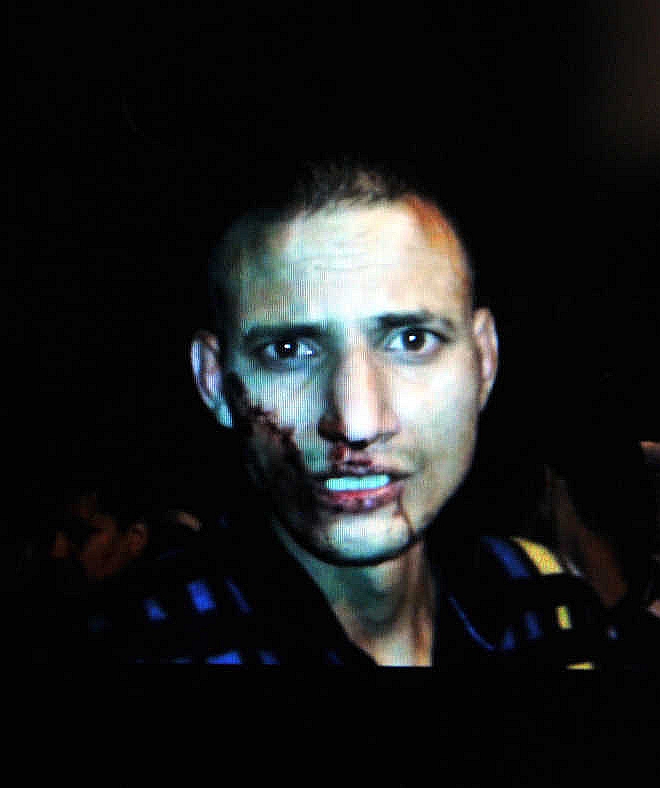 The victim who was beaten up by DSP (Traffic) Amit Thakur.

According to the FIR lodged by Shimla Police, DSP Amit was on traffic checking duty and was going toward Chotta-Shimla with his driver Hans Raj when he spotted an Alto car (HP-01M-0865) parked in the middle of the road. His driver blew horn to signal the car-driver to remove the car but he didn’t remove it. Thereafter, the driver of the Alto car came out with a stick in his hands, abused and scuffle with him and even torn off his uniform. DSP reported to have sustained injuries on his right hand and some other parts of the body.

It was also alleged that the DSP was drunk as yesterday it was his birthday. When drivers blocked the road to protest against him, police lathi-charged.

Amar Ujala reports that the situation got uglier when angry crowd gathered around DSP. QRT was called and crowd was larthicharged, in which more than half a dozen people including innocent citizens and shopkeepers, who protested against DSP’s misbehave, were also thrashed and were injured. A magisterial inquary has been ordered into the matter after people reached the administration with complaint against police brutality.

An online news portal claims that DSP beat the driver brutally without any reason, smashed his car windows, and even manhandled shopkeepers who came for driver’s rescue.

Another report said that DSP was heading toward his home when he was attacked by some people sitting inside an inappropriately parked Alto car. The report also claimed scuffle between the two parties.

Taxi union has demanded the Shimla DC to take note of the incident and take strict action against the DSP. On the other hand, police has arrested the driver and registered an FIR. More details are awaited. There are rumors about Amit Thakur’s transfer as well. If he is transferred, it’ll suggest fault on the part of police too.

Tempted by Rs 100 crores fat funds, HPU joking with future of students by faulty implemention of RUSA in haste