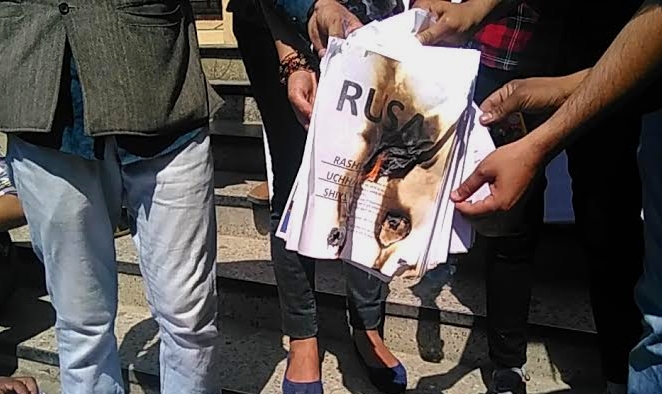 He said RUSA had been introduced in a hasty manner by (HPU) colluding with the state government to get additional annual fat funds of Rs 100 crores from the Centre.

Thakur also plans to raise the issue in the Parliament on Tuesday.

In their greed, Virbhadra government has played with the future of its students. Today, these students aren’t able to apply for their post-graduate courses in Delhi, Punjab, Chandigarh and other universities as their RUSA degrees are not being recognized,

He said with many universities across India not recognizing RUSA degree of HPU for postgraduate courses, the future of students graduating in 2016 also hangs in balance.

He said to make matters worse, the university is raising fees as well as planning to introduce RUSA system in its post-graduate courses.

No justification could be given for delaying the results, in some cases, for as long as three years. So now, if a third year graduate gets to know that he hasn’t cleared a first-year course, he/she would return and wait for additional years to complete these courses again! Virbhadra government should answer why such hasty implementation was done? What was their urgent need for annual Rs 100 crores fund? Was it worth playing with students’ future?

He has requested the Union HRD ministry to immediately intervene in the matter regarding the implementation of RUSA, delayed results and proposed fee hike with HPU. Also, since the academic session for the first batch of RUSA undergraduates is about to end, he has been following up with HRD ministry that immediate directions be issued to Delhi, Punjab, Chandigarh and other universities so that applications from HPU students be admitted until the matter be resolved.