CHMABA- Owing to insensitivity on part of ministers and bureaucrats, roof of the government primary school Bhanoi, Chamba, which was in tatters and was due for maintenance since long, eventually collapsed due to thunderstorm, leaving many girl students injured.

Class four students, mostly girls, were in their classroom when the ceiling of the roof suddenly collapsed.  The teachers somehow rescued kids trapped under collapsed ceiling. Three of the injured kids were reported to have sustained serious injuries on their head. A pharmacist was called to provide first-aid to the injured kids and villagers also gathered after they heard screams. 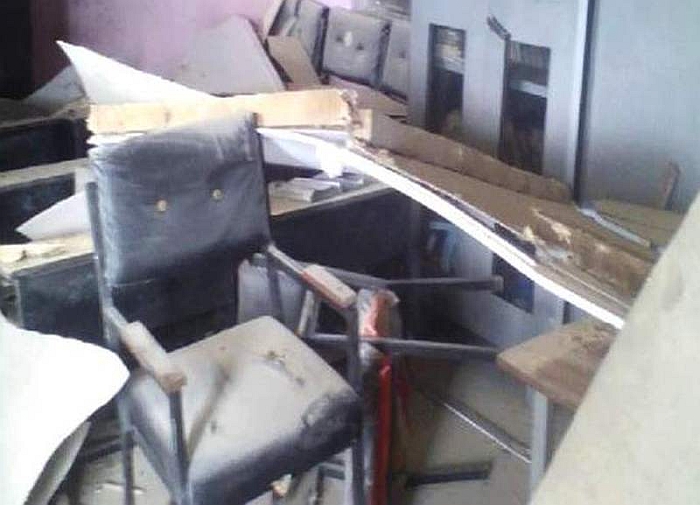 The roof collapsed during half-time and fortunately most of the kids were in playground then.

According to the HT Dharampal, the school wrote repeated letters to the BPEO informing about miserable condition of the roof, how it posed risk to kids, and had requested urgent repair. The school staff had clearly mentioned high probability of a collapse.

Apparently, the concerned officer and department ignored it multiple times to eventually let it collapse and injure students. When the BPEO was asked regarding the incident, he denied having any information about the school.

It’s a matter of utter shame for Himachal Pradesh Government and state’s lethargic, incapable and insensitive bureaucracy, which do not even care for lives of kids.

MLAs and ministers don’t take more than five minutes to pass bills proposing fat hikes in their own salaries, allowances and pensions. Both opposition and ruling government never had any debate about their salary bills. Himachal’s MLAs are given loan at just four percent interest rate to buy cars and bungalows.  But when it is about maintenance of public facilities or repair of government school buildings, the state is always under huge financial debt (a reason to avoid work).

Condition of government schools of Himachal both in terms of infrastructure and academic standards is not hidden from anyone. Himachal is heading towards becoming state with poorest school results. The officials don’t move a muscle despite the fact that news dailies have been reporting damaged school buildings in need of immediate maintenance across Himachal, especially those in rural areas.

However, government is clearly depriving children from economically weaker section of society and rural regions dependent on government schools from quality education. The government has just opened schools that it hardly cares to maintain, and washes its hands off without considering the fact that education means much more than just opening cowshed-like schools.

Further, it is actually true that bureaucrats rarely face any action even when they are responsible for deaths of people, such as in case of jaundice outbreak in Shimla. No higher official of IPH or Shimla MC responsible to check quality of supplied water was arrested or even stringently questioned. The contractor and others arrested in this case are out on bail. Then it goes without guessing that we will see any action taken on the BPEO in this regard.