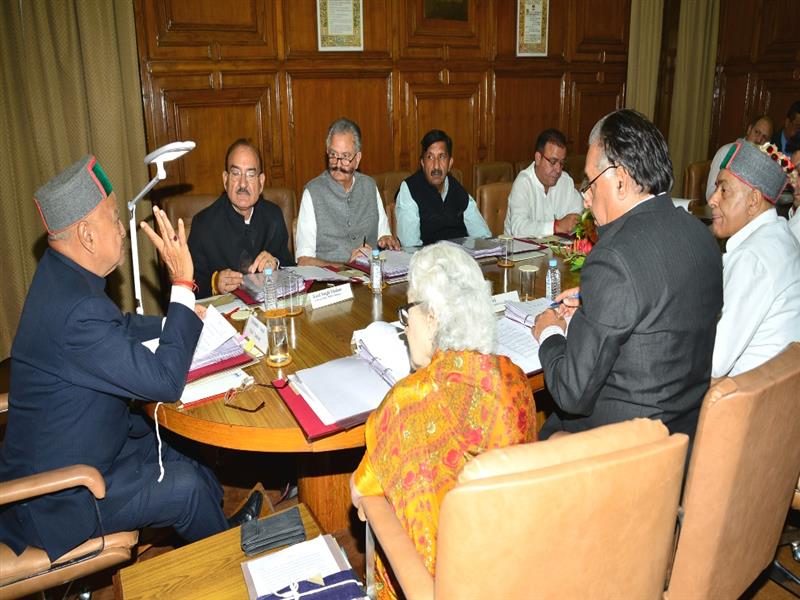 The Cabinet also accorded approval to 100 units of free electricity per month to the families affected by Hydel projects in the State as per the subsidized tariff determined by Himachal Pradesh Electricity Regulatory Commission (HPERC) from time to time with respect to Local Area Development Committees of the districts and the balance amount equivalent to the quantum of subsidy with the state government. This shall be done once in a year since the tariff is determined by HPERC.

Besides, it was also decided to provide 35 kilograms of ration to the Above Poverty Line (APL) families in Tribal areas of the State. A decision was taken to provide all three pulses to all the ration card holders irrespective of the number of units on the cards/scale as fixed by the state government.

It approved for creation of 855 posts of various categories for Shri Lal Bhadur Shastri Medical College, earlier known as ESIC, medical college and hospital Mandi at Ner Chowk.A decision was taken to fill 70 vacant posts of Firemen and 30 posts of Driver-cum-Pump Operators on contract basis in Fire Services Department.

To filling up of 65 posts of Drivers in Irrigation and Public Health Department amongst the lower categories in the Department by  relaxation of R& P Rules.

The Cabinet approved for creation and filling up of as many as 61 posts of various categories for new Government Polytechnic for women at Rehan in district Kangra.

Approval was accorded to create ten posts of Law Officers in H.P. Secretariat. It approved to up-grade four posts of Junior Assistant to Senior Assistant in the Directorate of Small Saving.

Decision was taken to fill two posts of Junior Office Assistant (IT) on contract basis in Co-operative Department and filling up two posts of computer Operators by promotion from amongst Class-IV employees in Planning department.

Approval was accorded for creation of two posts of Protocol Officer with supporting staff in the establishment of District and Sessions Judges.

Approval was accorded to fill up two vacant posts of Statistical Assistant  and two posts of Junior Office Assistant in Horticulture Department through direct recruitment and to fill up ten posts of Peons on daily wage basis in HP Election Department.

A special recruitment drive would be launched to fill the backlog posts against the new posts in every discipline for other Backward Classes (OBC) to overcome the shortfall of the category in the Government job.

The cabinet gave its nod to upgrade Civil Hospital Jawalamukhi to the level of 75 bedded Civil Hospital and  up-gradation of HSC Dhanote (Jurahi) to PHC in district Kangra along-with creation of requisite  posts.Approval was accorded to open Primary Health Centre in Shivpur Gagret Constituency of Una district and Primary Health Centre at Raja Ka Talab  in district Kangra alongwith creation of adequate staff.

The Cabinet also approved opening of PHC at Basantpur in Shimla district.

Approval was accorded to upgrade Community Health Centre (CHC), Jawali to 50 bed Civil hospital Jawali along with creation of requisite posts. Besides, it approved  CHC with 30 beds at Rey in Jawali.

The cabinet gave its approval to open Sub-Tehsils  at Sarahan and at Taklech in Rampur Sub-Division of Shimla district.It approved to open new Hydro Power Engineering College Bandla in district Bilaspur.

It approved proposal to the scheme for awards for prisons personnel.

The Cabinet approved the proposal for grant of ex-gratia compensation amounting to Rs. 10 lakh on death and Rs. five lakh on permanent disability to the staff deployed on election duty by State Election Commission

The Cabinet decided to open HP PWD Sub-Division at Khundian in district Kangra.

It approved to regularize the daily waged workers of Nepali origin in relaxation of R&P Rules.

The Cabinet gave its approval for declaration of Summer Festival Ghumarwin as a District level Fair.

The Cabinet approved to take over the services of teaching and non-teaching staff of erstwhile privately managed Jawalaji Degree College, Jawalamukhi and Deen Dayal Mahesh Degree College, Sugh-Bhatoli in district Kangra which now would be named as Government Degree College Sugh- Bhatoli.

It was also decided to make amendments in Rule 69-B of Himachal Pradesh Motor Vehicle Rules, 1999.The Cabinet approved the Himachal Pradesh Miscellaneous Adventure Activities Rules, 2004, which would besides the existing  HP Aero Sports and River Rafting Rules will include many Miscellaneous Adventure activities as river crossing, zorbing, hot air ballooning, skiing, trekking, rock climbing, bungee jumping, rolling balls/water balls, zipline etc. However the objections/suggestions with regard to rules would be invited from the general public before finalization.

The Cabinet approved amendments in section 3 of the Himachal Pradesh Tax on entry of goods into Local area Act, 2010.