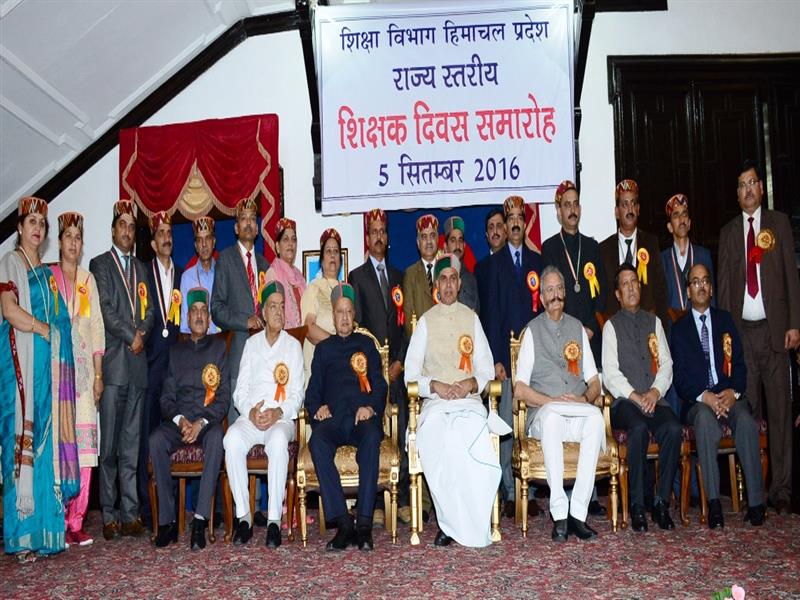 SHIMLA- While attending State Level Teachers Day function at Raj Bhawan, referring to the procedure of selection for National and State level awards to the teachers on the Teacher’s Day, Chief Minister Virbhadra Singh said that the teachers who were willingly serving in very remote and far flung areas of the State in difficult circumstances needs to be honoured on such occasions. It had been observed that none of the teachers who had been teaching the students with commitment since last many years in such hard and tribal areas were not in the list of awardees, he said.

He directed the education department to keep in mind the services of those teachers also who were really committed to their profession and working in tough areas rather than wasting their time in getting adjusted in towns and cities. He also listed the name of the hard and tribal areas from where none of the teachers were in the list of awardees and directed to consider the services of such teachers in near future while nominating the teachers for awards. However, the teachers who got awards today was due to their hard-work and dedication and needs appreciation, he said

Himachal Pradesh today was one of the most literate State after Kerela having attained 88 percent literacy rate, he added.

The Chief Minister added that there was a need for value based education which could make the students excel in future endeavours and teachers should derive satisfaction from the achievements of their students and not from monetary gains. He also stressed upon adopting new techniques in the present era of methodical technology.

During the last 44 months, as many as 1010 schools were either upgraded or opened and 41 colleges were opened in the far flung areas of the State, especially to benefit the girl child, he claimed.

He said it was observed that due to tough topography of the State, the girl child could not pursue higher education far away from their home. The Government particularly focusing on this aspect and realizing the importance of educating girl child, decided to open schools and colleges in remote areas so that the girls could be provided higher education at their door-steps and the results were astonishing as the number of girl students were far more than the boys in these institutions opened in such areas said the Chief Minister.

He said that keeping in mind the importance of education in socio-economic upliftment of the people, the state government had kept a provision of Rs. 6013 crore for education sector in this fiscal.

Under Rajeev Gandhi Digital Scheme as many as 22,500 laptops/netbooks were distributed to the meritorious students of 10th and Plus two and as many as 10,000 laptops were in process of distribution in this fiscal. The Chief Minister said that under various scholarship schemes, Rs 77.72 crore was spent to provide scholarships to as many as 98,541 students.