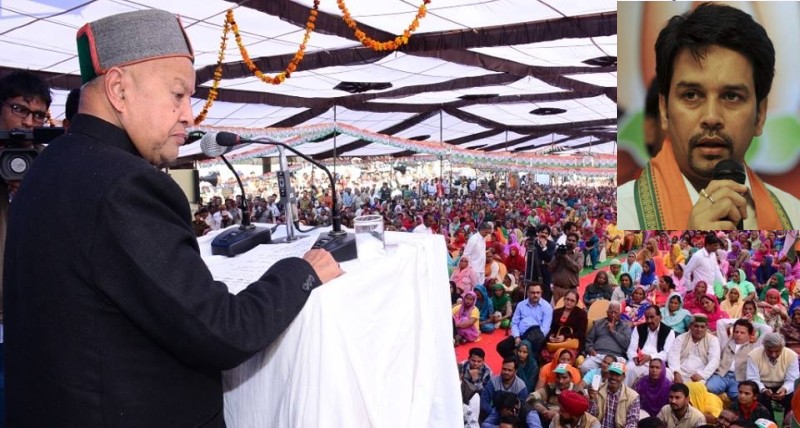 SHIMLA- The Chief Minister of Himachal Pradesh, Virbhadra Singh yesterday performed Bhoomi Pujan of Rs. 10.27 crore Nagnoli-Ispur road. Interestingly, Anurag Thakur, sitting member of Parliament and BCCI President, had also performed ‘Bhoomi-Poojan’ (Inaugural Ceremony) for the aforesaid road prior to the CM claiming it as a developmental step from the Centre government.

The CM slammed Anurag Thakur and said that instead of taking credit for Centrally sponsored schemes under obligations, the BCCI President should work for strengthening State-Centre relations.

“It is pertinent to mention that sitting Member of Parliament Anurag Thakur from the region also performed the Bhoomi Pujan of the said road from Panjawar to Bathri just to take credit though the road required strengthening from Nagnoli to Ispur”, said the CM.

Under Pradhan Mantri Grameen Sadak Yojna, (PMGSY) or any other Central scheme, it is obligatory for Union government to provide State’s share for development. Besides, over and above the land belongs to the State and it was the right of the State government to either lay foundation stone or inaugurate the centrally sponsored projects. The Central government can claim ownership of land in Union Territories. It is the duty of the Union government to ensure progress of the states equally, he said.

CM advised Anurag Thakur that instead of concentrating on inaugurations and taking credit of the States share, he should rather fight for and take up the matter for release of funds for the Swan River Channelisation, which is withheld by Union Government since long.

“If Anurag Thakur is a true benefactor of the people of the area, as Member of Parliament, he should take up the pending works and grants which were hanging at different levels in union ministries,” said the CM.

The Chief Minister appraised the recommendation of Lodha Committee which was tightening its noose around the office bearers of the State Cricket Associations holding office of profit and the administrative body of ever rich Board of Cricket Control of India (BCCI).

Chief Minister gave these statements at a function held at Khad village in Haroli constituency of Una district. He also launched the State level Welfare Scheme for women registered with Building and Other Construction Workers Welfare Board at a function. Washing machines were distributed to the women under the scheme with assurance of distribution of washing machines all over the State in phased manner.

As per official statement, 1100 washing machines will be distributed to the women registered under the Board. The CM was also urged to enhance the token amount for marriage of two issues of the families registered under the Construction Welfare board from Rs. 25 thousand to Rs. 51 thousand in near future. In case of natural and accidental death, it was urged that the sum is enhanced from Rs. 50 thousand and Rs. one lakh to Rs. 2 lakh each respectively.

The CM also spoke over the decision of demonetisation taken by Centre on the name of curbing black money. He welcomed the decision, but pointed out that Rs. 2000 notes should have been made considering compatibility with ATMs. The Union Government should have worked on all ifs and buts before introducing the currency besides other technicalities which are now posing huge inconvenience to common masses.

In wake of possible drought-like situation in Himachal Govt. claims it’s prepared to deal with it