KULLU- The leakage in NHPC’s Parbati Hydro Power Project in Sainj, Kullu, Himachal Pradesh, continues to threaten lives and property of nearly 400 families of over a dozen of villages. Several families are already forced to abandon their houses and grab their valuables. Administration had to shift villagers to safer place as destruction almost seems inevitable. Bhenbal (भेंबल) village residents spent their night under open sky for the fear of landslide. The leakage has also destroyed crops of the villagers. The 800 MW capacity project, which was to be commissioned in next few days, has already proved that the run-of-the river hydro power technology is highly risky considering fragile Himalayan Mountains. In fact, access drilling of mountains in Himachal has been cited as a blunder by environmentalists and organization like Himdhara that had been raising alarm over catastrophic consequences that’ll follow it.

In the current case, villagers first reported seepage from the headrace tunnel on April 12 but neither the power corporation nor the administration took it seriously. The National Hydroelectric Power Corporation reportedly didn’t stop water supply to the tunnel. Rather, the corporation, in a written reply, assured the administration that everything was just fine. The leakage continued to increase over the week. As long as 200 meters long cracks appeared on the mountain. On Monday night, villagers were shook by sound of landslide right above their villages. The villagers were forced to spend the night under open sky for the fear of possible, massive landslide. The boulders continue to roll-down the mountain along with erosion of soil.

The NHPC was forced to block the water-supply only after the landslide. However, the flow of leakage is only increasing despite NHPC’s claim of blocking water supply. The cultivation lands of the villagers are almost drowned due to leaking tunnel. It’s ridiculous that NHPC didn’t stop the water-supply when the leakage was first reported to it. 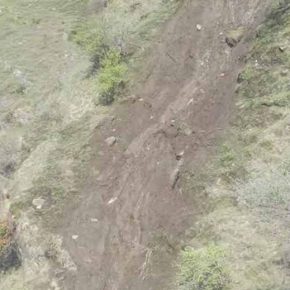 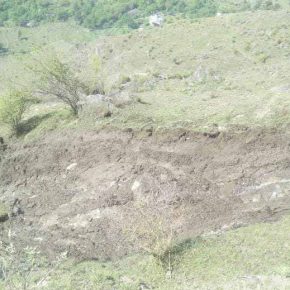 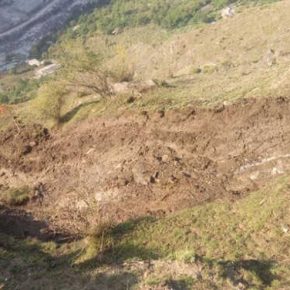 The administration also stepped in after the landslide and visible erosion of soil. As much as 30 families were evacuated from their homes. If the landslide of greater scale occurs, it’s estimated to wipe out as much as half of the Rella Panchayat villages including Dahra, Khadoa, Jeeva and two other villages.

Meanwhile, the Chief Engineer, Parbati Project Stage-II, SK Yadav, claimed that there is no more water in the tunnel now and close vigil is being kept on the tunnel. A team of the geologists is also on the way from Delhi, he said. The Deputy Commissioner, Kullu, Yunus Khan, also visited the spot on Wednesday and reviewed the situation. He assured that corporation is directed to take preventive measures to fix the leakage.

Parbati Hydroelectric Project (Stage-II) is a run-of-the-river scheme that proposes to harness hydro potential of the lower reaches of the river Parbati. The river is proposed to be diverted with a Concrete Gravity Dam at Village Pulga in Parbati valley through 31.52 Km long Head Race Tunnel. Power Houses are located at village Suind in Sainj valley.

It’s not the first instance where drilling of mountains and leakage in man-made tunnels have posed risk to the human habitation and their cultivation lands. Earlier, the Central Water Commission, Department of Energy and Central Electricity Authority, during an inspection, had found profuse leakages in the surge shaft of the 17 km long tunnel of Karcham Wangtoo hydro power project. It was assumed that cracks and fissures may have developed over the course of time.

Later, Himdhara, an environment research and action collective based in Himachal, extracted some information through Right to Information (RTI) Act. Surprisingly, there were no details like exact nature and extent of the said leakage. Local communities from the villages around the Karchham Wangtoo tunnel still report leakages in the tunnel. Then, there were reports of leakage from the head race tunnel of Chamera III Hydroelectric Project in 2012. In this case, the residents of an outlying Mokhar village had to live in the imminent danger of soil erosion.

As a matter of concern, the state hardly monitors the safety and water flows in these hydro-projects. In other words, monitoring authority is totally absent and construction of new power projects is being allowed blindly. Even the
Environment Impact Assessment studies reportedly do not mention villages located on the mountainside through which the tunnel passes as affected villages.

According to a article published in the Economic and Political Weekly in 2013,

In response to a series of RTI applications filed by Himdhara, the Irrigation and Public Health department has revealed that in villages located in the area affected by the Karchham Wangtoo project, by 2009 almost 43 out of 167, i.e. almost 26% of water sources had dried up and in 67 sources, i.e. almost 40%, the discharge had reduced.

imilar data has been provided for four other project sites in different parts of the state ‒all revealing that villages located above the tunnel are indeed being affected by the construction of these hydropower projects.

The government need to review its policy before blindly encouraging construction of more and more power projects despite imminent risk to villagers and thousands of lives.

Why Forest Rights Act, 2006 is the way to go in Himachal