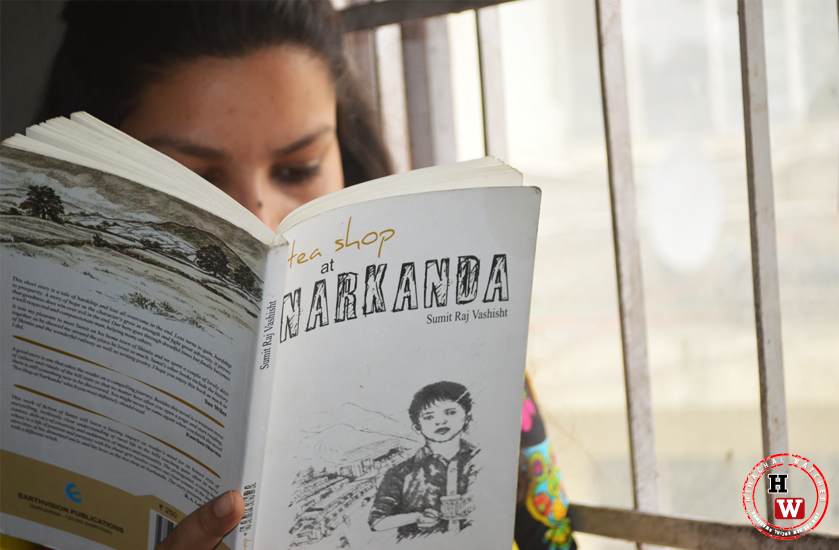 Shimla-based travel writer and a tourist guide, Sumit Raj Vashisht, had released his new novel ‘Teashop at Narkanda’ very recently. Himachal Watcher received a copy of the novel from the writer for reading. After reading it we thought of sharing a review with our readers. For avid readers, the novel is a four to five hours read. Two types of characters are, more or less, idealized. People are either pure evil or are overwhelmingly kind. Writer yearned to create a balance between agonies of human life and elements of hope. Role of destiny is emphasized irrespective of writer’s intentions.

However, the writer did succeed in creating a high-tension melodrama. Behavioral attributes of some characters agreed with reality. Description of routine life in Shimla or Narkanda and accounts of socio-cultural aspects are accurate. The writer is acquainted with religious rituals, ceremonies and beliefs of native culture. Depiction of geography is convincing as well.

Those who have been to Narkanda, can match the description of this bus stop at a small market in upper region of district Shimla, Himachal Pradesh. The plot is based on one of India’s dreariest natural disasters -Kedarnath flash flood in 2013 that had killed over 5,000 people and had rendered thousands homeless. Dreams and hopes of not only families but each individual were shattered in just one moment. Birju, the protagonist in the story, is one such teenager, who had lost everything including his parents and siblings. He is left with nothing back at home, so he moves to Shimla in a hope to find means to livelihood. He should have been to school at that age when empty pocketed he struggled for shelter and food. Carrying the trauma of his loss, he wanders like an orphan only to find trivial jobs at small dhabas. At night, he sleeps under a canopy behind the church on the Shimla Ridge. The narrator often saw him sitting on a bench in front of the Christ church. The narrator, who is also struggling in his own ways, hears the traumatic story of the boy. But the narrator finds himself helpless to offer any help to the boy owing to his own turmoil.

The story of Birju is narrated by the writer.

The usual, unhealthy work-environment and poor treatment of helpers at dhabas add to the agony of the protagonist. But that wasn’t all. The circumstances take a dramatic twist when the boy discovers a news about his family. Not all of his family members were dead. This discovery was followed by a long struggle for survival by protagonist and his family. The house, land, and all possessions were lost in the natural calamity. Evil relatives add to the misery of his family.

The academic ambitions of a teenager now conflicted with desperate need to earn a living. With little education, working at a tea shop at Narkanda was all he could find on the name of employment. He is stuck there for over a decade, living a miserable life.

New characters continue to emerge as story progressed. The writer used them to introduce twists in circumstances. The protagonist is more an outcome of circumstance than his karma or hard-work. But what was the ultimate fate of the protagonist and his family?

The perfect circle of helplessness that surrounds the protagonist throughout the entire story contradicts with attributed positive personality traits. It’s towards the end of the novel when Birju punches his owner and leave him unconscious. Otherwise, Birju is always a victim. This helplessness would appeal to emotionally sensitive readers, of course.

The writer tried hard to introduce characters with detailed description, which is admirable. To conclude the review, we would say, the novel is worth a read and readers will find it motivational.

Sumit Raj Vashisht was born at Shimla in 1967. His father, a railway engineer by profession also a well known Urdu poet under the pen name of Talat Irfani, was never interested in leaving Shimla. Hills are Sumit’s first love, he belong to them. Here, he tells stories, conducts educational camps for school children, writes books on his travels, works as a Heritage Guide and a Tour Companion on Himalayan Valleys outings and helps those British who return to India looking for their family history. His innovative ideas of providing experiences to his traveler clients have made Shimla Walks, his company famous.