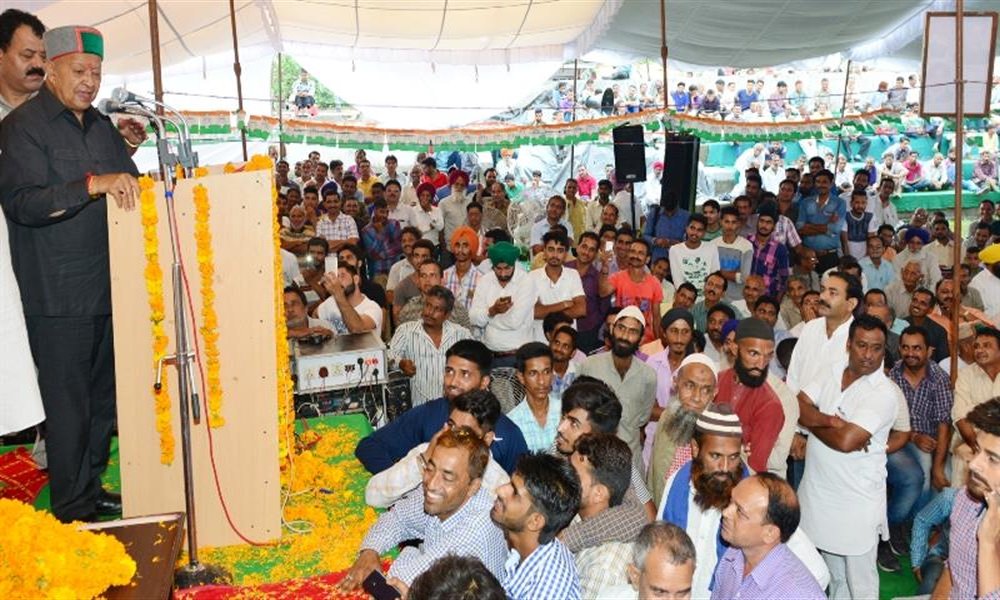 SOLAN – The Chief Minister Virbhadra Singh today appeared miffed over grouping of his own MLAs and replied to recent criticism he faced from within the party. Several Congress MLAs in Himachal Pradesh has grouped against the CM due to alleged corruption cases against him that are being investigated by Central Agencies.

Lately, Singh has been facing legal troubles, and his own MLAs have reportedly made it clear that they would not contest upcoming assembly polls under his leadership. The Transport Minister, GS Bali, yesterday clearly said that party President Sonia Gandhi is their leader, not Virbhadra Singh.

He termed it a conspiracy and warned his party men of dire consequences of conspiring against him, to bring down his regime in nexus with opposition.

He was addressing a public meeting at Ramshehar in Nalagarh Assembly constituency of Solan district on Wednesday. Though, he was there to speak about developmental achievements in Nalagarh and Doon region, he mostly tried to threaten rising rebels within the party. About development, he claimed the region is tip-top and feature most of public facilities.

BJP believes that Virbhadra Singh is the biggest hurdle in its way of retaining power in the state, he said.

My dreams haunt the BJP leaders and no matter how hard they try to conspire against me, they will never be successful in their ulterior motives,

He warned the black-sheep within the party-fold who are trying to be hand in glove with the BJP and said we will certainly find such people out and bring them before the public. These people are opportunists and instead of working for the welfare of the people they try to serve their own selfish motives, he added.

He justified opening too many educational institutes by citing as the need of the time as population is also increasing per day. People love me, and that’s why they elected him as CM six times.