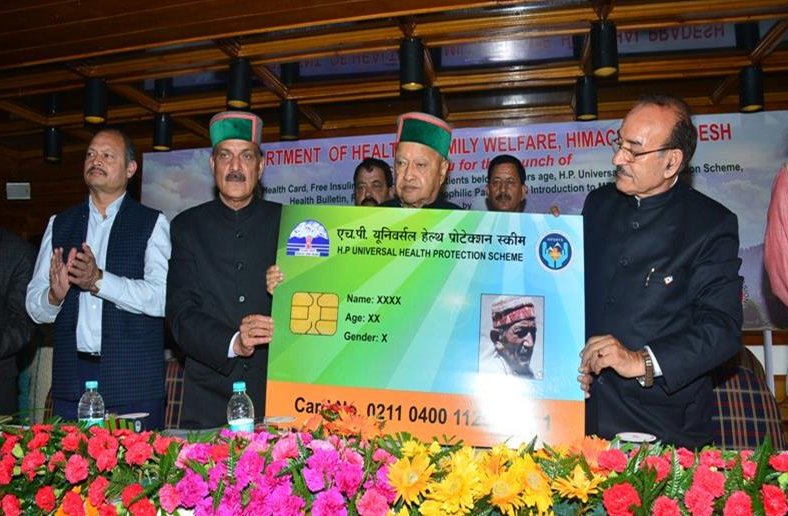 The Health Minister claimed Himachal has become the first state in South East Asia to launch electronic health cards. Few lakh people, not covered under any scheme, were now brought under the ambit of Universal Health Scheme, he said.

Other schemes include the HP Universal Health Protection Scheme, a health bulletin brochure, a scheme for free treatment of Hemophilic patients, screening scheme for patients of non-communicable disease and introduction to ‘Measles Rubella (MR) campaign.

The electronic card titled “The Health Card HP” is available for download on the Google Play Store.

The Chief Minister also honored Dr. J.K. Mokta for his research and contribution in formulating a scheme for free insulin for diabetic patients below 18 years of age.

The Minister said that initially dialysis facility for diabetic patients was started in Zonal hospitals (ZHs) of four districts. This facility would be extended to all the ZH’s in the state in a phase wise manner, he said.

The government is trying to provide 300 different type of lifesaving medicines to free of cost in all Community, Primary and health sub centres, he said.

The Government targets to bring the infant mortality rate down to 25/1000 per year which now was 28/1000 per year.

Additional Chief Secretary, Health Shri Prabodh Saxena informed that the Chemotherapy facility was now available in IGMC Shimla and is free for Below Poverty Line families.

He said free insulin for type-1diabetic patients below 18 years of age and free treatment to hemophilic patients was also being launched.

The amount for critical care cardiothoracic surgeries, Genito Urinary services, Neurosurgery, Radiation oncology was enhanced from 30 thousand to Rs 1.75 lakh. This amount for the cancer patients is Rs. 2.25 lakh, which was far more than what was mentioned in the guidelines under universal health coverage scheme, said the Health Minister.

In the present tenure, claimed the Chief Minister, four new medical colleges were sanctioned for the state. The Dr. YS Parmar Medical College at Nahan and Jawahar Lal Nehru College at Chamba have started functioning and many students from all India medical quotas beside Non-Resident Indians have taken admission in these medical colleges.

The construction work of medical college building at Hamirpur could not be taken up because the forest clearance was still awaited.

Besides these developments, many Ayurveda health institutions have been opened in far flung and rural belts of the state, he said.