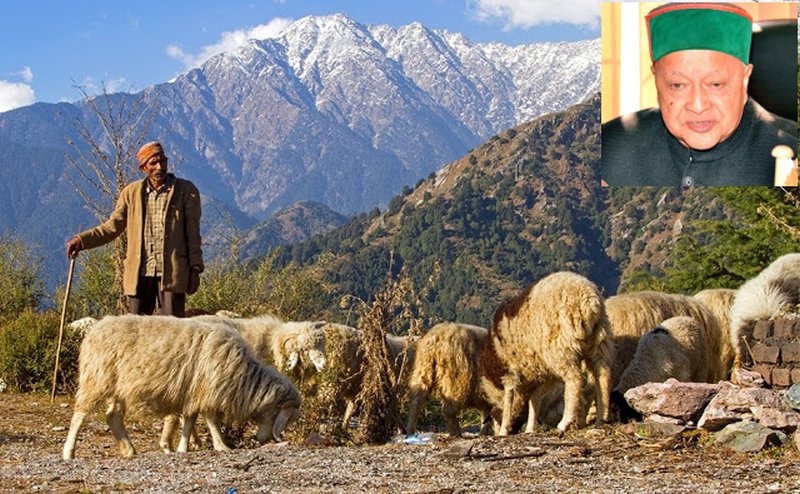 Shimla – Chief Minister Virbhadra Singh has annoyed the Gaddi community of Himachal Pradesh by making a controversial remark while taking to media persons. The Chief Minister was on a visit to Basdehra in Una district.

Recently, the Chief Minister has faced criticism for alleged insensitive remarks over grieve incidents like the deaths due to Swine Flu and the mysterious death of forest guard Hoshiyar Singh.

This time, the Chief Minister was targeting Satpal Satti, State president of the Bhartiya Janata Party. He was criticizing the use of cheap language and derogatory remarks made by Satti.

However, what appeared to be an intention to insult the BJP President, the Chief Minister said something that has annoyed the Gaddi Community of Himachal.

Soon after the video of the news clip appeared on social media, the Chief Minister came under fire for showing insensitivity towards a Himachal’s oldest communities residing in Chamba, Kangra Mandi, Kullu, and Bilaspur districts.

People concluded the Chief Minister wanted to devalue and prove the position of Satii in BJP to be insignificant by citing this example. However, the reference to the Gaddi Community went wrong as the comparison was seen as an insult to Gaddi people.

Some leaders of the Community openly criticized the Chief Minister for his remark. Among these, Onkar Nehria, a sitting councilor and a Gaddi leader, expressed a surprise over the remark. He said it was not expected from a person holding the chair of the Chief Minister.

The social media reactions of some leaders and people associated with the community also hinted damage to the image of the Chief Minister.

At the same time, the opposition has received a political opportunity to show sympathy with the community. The remarks are likely to be used by the opposition against the Chief Minister in election campaigns.

Earlier, the Chief Minister, while addressing a public rally, had said the BJP believes in unruly politics, be it Arun Jaitley, or other BJP state leaders like Anurag Thakur or Prem Kumar Dhumal. They have hatched a conspiracy against by framing false cases against him.

He said that his case of Income Tax was being investigated by three central agencies, which was unlikely a rare example to be seen. No matter how hard they try to suppress me, I will come out unblemished, he said.

Those in opposition should be considered as opponents and not as enemies, he said, adding that now the opposition takes ruling party candidates as their enemy. He said that the politics in the state, rather in the country has stooped to the lowest ebb.

Chief Minister said that in s democratic setup, one should not use cheap language or pass derogatory remarks.