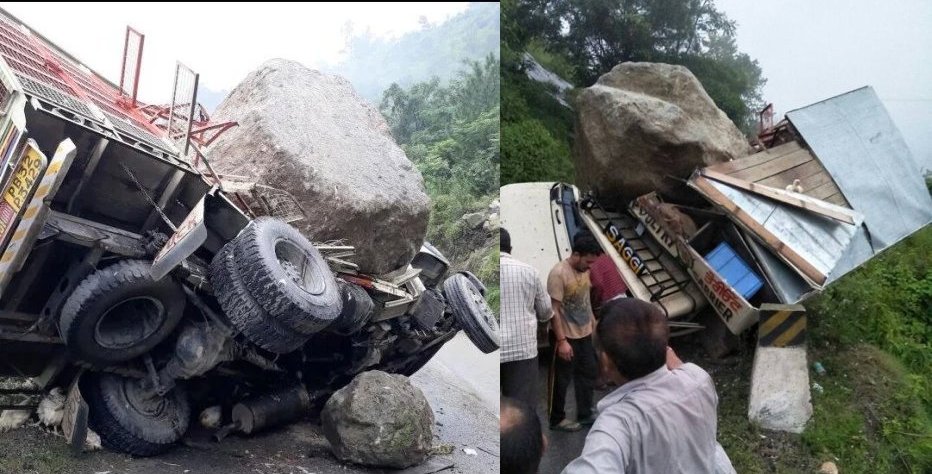 Shimla – Triggered by heavy monsoon rains, landslides and flash-floods on the National and State Highways of Himachal Pradesh continue. On Wednesday morning, a huge boulder rolled-down the hill due to a landslide and hit a loaded poultry truck on Manali-Chandigarh National Highway (NH)-21.

Three passengers, who were transporting the supply to Manali, were injured. No causality was reported. However, the collision was so powerful that it had almost pushed the truck off the road but was prevented by another boulder on the edge of the road. Heavy rains continue to lash most parts of Himachal, leading to loss of lives and damage of property worth hundreds of crores.

The rain fall data from August 1 to 7 have received 55 per cent more rain than the common pattern. As per the government assessment, the overall rainfall is deficient by minus 6 per cent but the pattern is very erratic and disastrous which has led to the loss of lives and property in the state.

During this monsoon season, so far, landslides, cloudbursts, flash floods etc. have killed over 20 persons including children. In terms of the livestock losses, so far, 124 animals including sheep, goats, cows, buffalos, and horses etc. have died.

Damage to road network including state roads, district roads and rural roads, besides bridges and culverts has been assessed to Rs. 291 crore. Water and irrigation schemes has also sustained a Rs. 80 crore loss. Similarly, three crore loss was reported to the electricity infrastructure. As per the government report, the total loss was assessed to be over Rs. 380 crores.

By August 8, more than 280 roads were damaged and blocked during last week, out of which 200 would be opened. About 740 schemes of IPH were also damaged. By August 8, 540 of these schemes were restored, claimed the government.

As per the Director Horticulture, the apple transportation is smooth and more than 19 lakh apple boxes were already sent to various markets from the state.

Rs. 64 crore had been released to Deputy Commissioners and stakeholders departments such as PWD, IPH, Electricity etc. for immediate restoration work and more funds would be provided on the need basis, said the government.

The losses could cross the current statistics as the Meteorological Department has warned of possible heavy rainfall in next five days with very heavy rains in isolated places.

The Health department has been directed to conduct a special drive for prevention of epidemics and water borne diseases and keep on reviewing any such incidence and take corrective measures immediately.

Directions were given to make response teams (QRT) operational in all the districts.

It is expected that the government departments will prepare and update the memorandum of losses and sent timely to the Central Government.