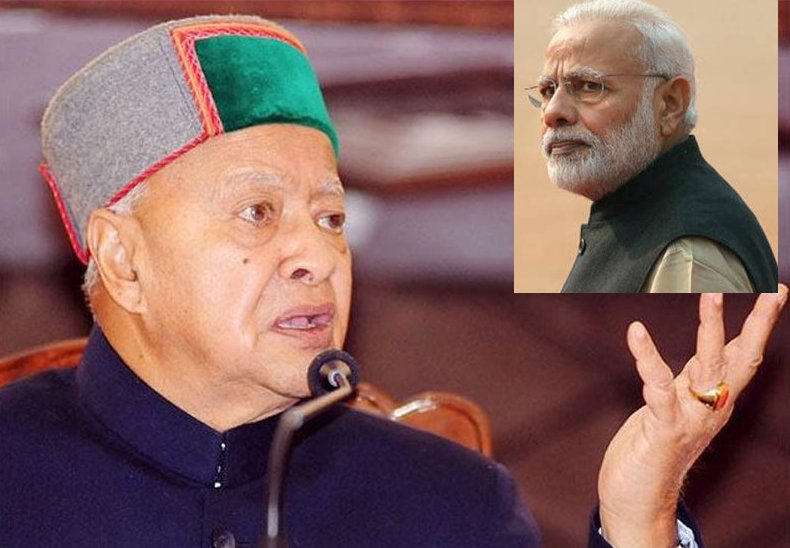 ‘Modi magic’ is now finished. People now know that PM Modi’s promise to deposit a sum of Rs.15 lakh in the account of each citizen was a political stunt for bagging votes. GDP has stooped to a very low due to demonetization.

Shimla: Opposed to the claims of the State Bhartiya Janata Party that the Himachal Pradesh Government is not able to utilize huge amounts of funds released by the Centre government for development, the Chief Minister Virbhadra Singh alleged the NDA government has reduced fund flow to the State drastically.

He expressed concern over the pattern of funding by the National Institution for Transforming India (NITI) Ayog. Himachal used to receive central assistance in the ratio 90:10 and was given the status of special category hill state before formation of the Aayog.

After formation of the Ayog, funds to the state have reduced drastically in centrally-sponsored schemes. The Centre has also withdrawn the special industrial package, he said.

Chief Minister speaking at a public meeting at Lambloo in Hamirpur on August 4, 2017.

During the previous UPA regime, the state had received more than Rs 2767 crore. However, the NDA government has discontinued after it came into power at the Centre, he said.

The hill states should have a separate provision of funds because of their topography, he said. The NITI Ayog had ignored all such provisions and the state did not receive any amount under the head of General Central Assistance during the years 2015-16 and 2016-17.

Despite financial constraint from the Centre Government, Himachal is leading in many sectors. Himachal is the best big state in the field of education in the country, he said. He also claimed that the per capita income of the state is now 1, 47,277.

He said people now know the promises of Prime Minister Narendra Modi to deposit a sum of Rs.15 lakh in the account of each citizen was a political stunt for bagging votes. The people of the country feel cheated as the prices of essential commodities are skyrocketing, he said.

He said that the Gross Domestic Product has stooped to a very low due to demonetization of currency. The NDA government has also created the youth by making false promises of creating two crore jobs, he further added.

I want to retire from active politics but Congress leaders persuading me to lead party in polls: Virbhadra