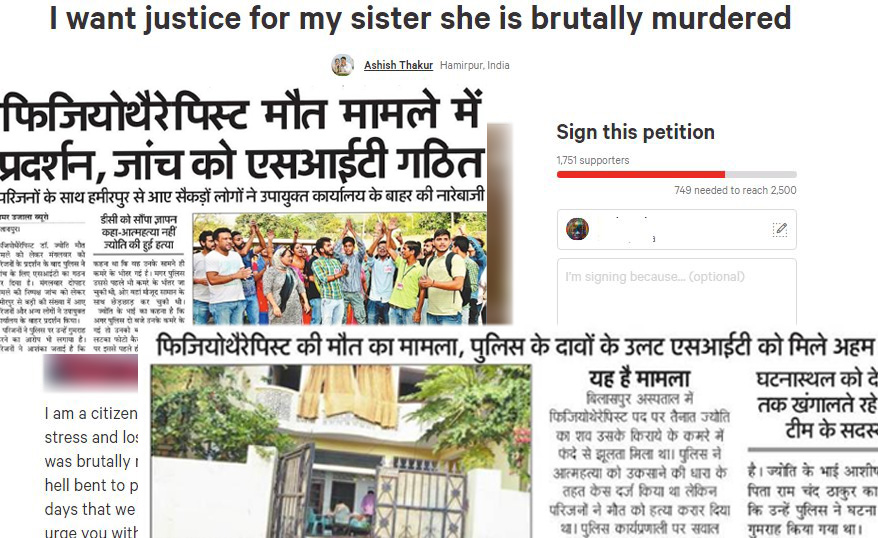 On Tuesday, finally the Superintendent of Police, Anjum Ara, formed a three member Special Investigation Team led by Deputy SP, Rajesh Kumar, to conduct a probe in the case.

Shimla: After an alleged shoddy investigation in the mysterious death of forest guard Hoshiyar Singh in Karsog, Mandi, and arrest of police officials including the Inspector General of Police, Zahur H Zaidi, in custodial killing of an accused in Kotkhai rape and murder case, Himachal Pradesh Police is again caught in a controversy.

On September 6, Dr. Jyoti Thakur, posted as a physiotherapist at the Bilaspur Hospital, was reported to have ended her life and her body was found in the rented apartment in Rauda Sector. The local police said it was a case of suicide. However, Jyoti’s parents and brother challenged the police claim and alleged it of misleading them by falsely labeling it as a case of suicide.

The parents referred to some points that strengthened the suspicion of people too. Parents suspected it to be a murder involving an unknown third person. Victim’s brother, Ashish Thakur, filed an online complaint alleging it a case of pre-planned murder. The brother also filed an online petition on Change.org requesting people to sign it and help him get justice for his sister, who was allegedly murdered. He alleged the local police and some unknown person of staging it as a suicide. The petition said:

I want justice for my sister she is brutally murdered

I am a citizen of district Hamirpur, Himachal Pradesh under grave stress and lost all hope in police and administrations. My sister was brutally murdered and local police and administration are hell bent to prove that this is a case of suicide. It has been six days that we have not been post-mortem and forensic report. We urge you with deep sorrow to interfere in this matter get us justice.

The parents alleged that the police had already visited the room but lied to them claiming it entered the room in their presence only.

The post-mortem was conducted at about 8 PM in a haphazard manner under suspicious circumstances, alleged the parents.

They alleged the police claimed it entered the room only after the arrival of the parents at about 2 PM, but the photo of her body had already appeared on social media at about 12 PM. The parents questioned if no one entered Jyoti’s room prior to them, then who clicked this photograph.

The parents also alleged that the room was vandalized when they entered it, but in the picture, it appeared fine and things were on their places. They suspected that someone had already entered the room and ransacked the place like he/she was searching for something.

Thereafter, the parents and people have been protesting and demanding a fair probe. On Tuesday, finally the Superintendent of Police, Anjum Ara, formed a three member Special Investigation Team led by Deputy SP of Ghumarwin, Rajesh Kumar, to conduct a probe in the case.

The SIT had already initiated a probe and is said to have recovered some items like laptop, memory card, mobile bills, pages of a diary etc. from the room of the victim.

It is noticeable that initially the police had denied recovery of any such object from the room.

The SP has assured the parents of a fare probe.

However, repeated naming in controversies and allegations of manipulation in investigations of criminal cases is damaging the trust of people on its police. These cases has raised critical question over the allegiance of the police towards people.