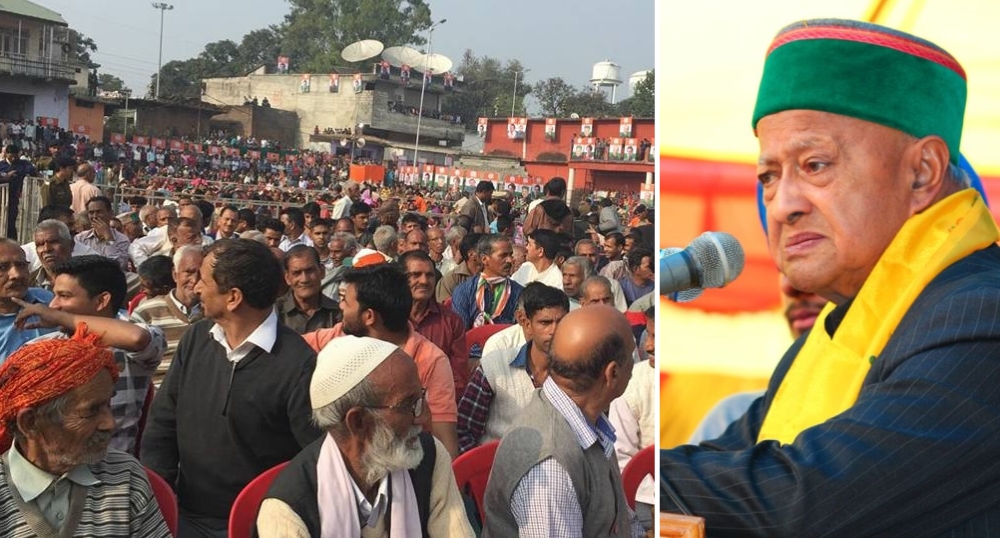 Not only the Chief Minster felt insulted, but he left the desk without completing his address. However, he did rebuke the workers in an angry tone.

Shimla: On Monday, as a party, the Congress in the poll bound Himachal Pradesh faced huge embarrassment in presence of the National President Rahul Gandhi, Chief Minister Virbhadra Singh, Sushil Kumar Shinde, and other party leaders.

Not only the Chief Minster felt insulted, but he left the desk without completing his address. However, he did rebuke the workers in an angry tone.

Virbhadra advised the party workers to learn some manner and not to interrupt when someone is already speaking from the desk and said, “Kuch to Tameez Sikho”.

GS Bali urged the workers to calm down and maintain discipline. Right after it, Rahul Gandhi took over the desk and gave a speech. However, he did not make any comment regarding the incident in his speech.

Meanwhile, Bali, Virbhadra, and Shinde were seen having some conversation over it, which is also visible in video clips of the rally.

The feud between the current Transport Minister GS Bali and Chief Minister Virbhadra Singh is is an old one. Virbhadra Singh did not want to accompany Rahul for his rally in Nagrota Barwan, but latter insisted him to join.

Virbhadra Singh had been avoiding this very constituency. In fact, it was the first time he visited Bali’s constituency after the announcements of HP polls date.

Kangra district decides the fate of the parties as it has the largest number of constituencies at 15. Bali enjoys a stronghold in his home district.

The question is whether it was a deliberate attempt or the workers had done it at their own will.