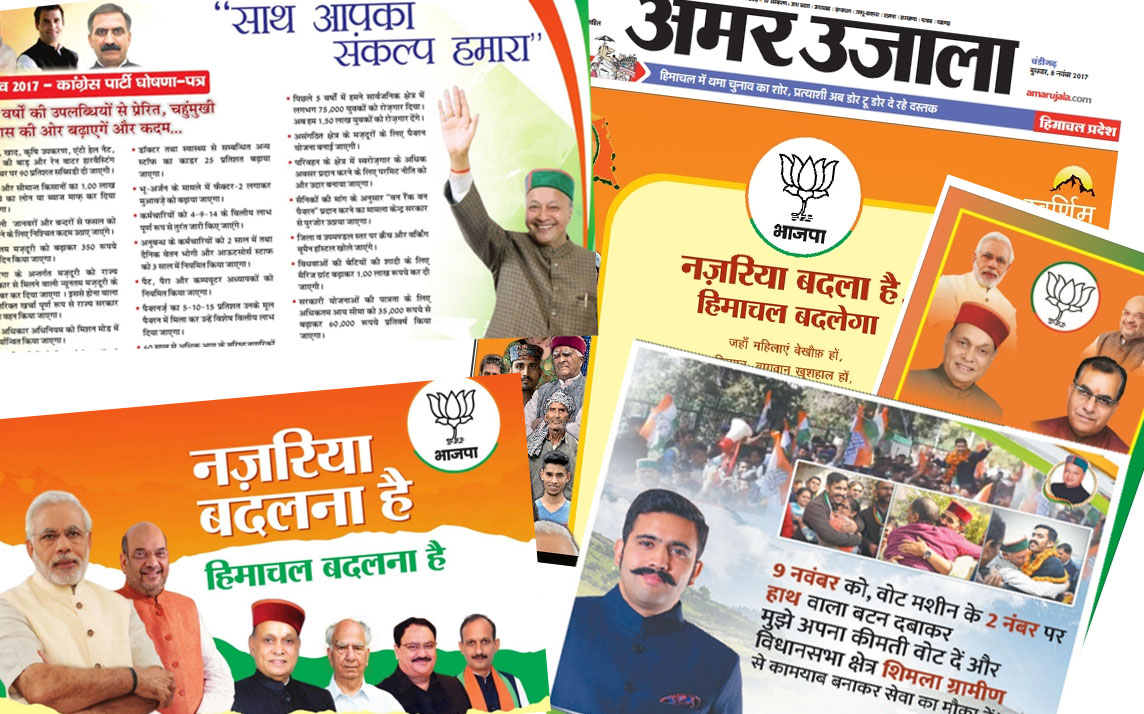 To grab the attention of  the online users, who are deep into reading and writing blogs, the BJP has made good amount of investment in Google Adwords/ Adsense.

Shimla: Tomorrow, on November 9, Himachal Pradesh will go to polls. The public will make their choice (provided EVMs are not tempered). There is a gossip that the Congress party did not spend much on campaigning in Himachal because the party has already accepted its defeat. The big guns of the Congress are laying more focuse on the polls to the Gujrat assembly.

There could be only two reasons – either it was due to fund-crunch or the Congress was sure of repeating its government.

While addressing a public rally in Nurpur recently, the Chief Minister Virbhadra Singh said the Enforcement and the Income-Tax Department have seized his accounts, so he has no money for campaigning. Mr. Singh was taking the road as helicopters were not available for him on occasions.

Anyone can tell that the Bhartiya Janata Party has done everything that it could do to advertise itself. The BJP had been bidding highest for the full front-page ads in the Himachal editions of the national dailies like Amar Ujala, Dainik Jagran, Punjab Kesari etc.

The list of BJP’s star-campaigners and the number of public rallies speak for themselves.

The BJP chief Amit Shah, the Union Minister Jagat Prakash Nadda, Rajnath and the Prime Minister Narendra Modi were leading the campaigns for the party in Himachal.

Public meetings or rallies featuring star-campaigners cost a lot. As compared to the BJP’s 197 rallies, the Congress confined its campaigning to only 65 rallies.

On the name of star-campaigners, the Congress did not offer much except the Vice President of National Congress Rahul Gandhi, that too just a couple of days before the State goes to polls.

The social media campaigning and resources needed for it were given full attention by the BJP, while Congress kept it very limited.

The BJP prepared a number of special videos shot to target specific constituencies. Several vehicles were equipped with LED screens and sound systems. These videos were played during the Parivatan Rath campaign.

Moreover, it is evident from the quality of videos that it was a job of professional cameraman and video editors.

Rest, the BJP has been ahead of its rival in placing large hoardings/banners all across the State.

To grab the attention of the online users, who are deep into reading and writing blogs, the BJP has made heavy investment in Google AdWords/ Adsense

On YouTube, BJP’s said videos, which were over 20 min long in some cases, were played as advertisements.

The BJP advertisements literally flooded national, regional, and even global news portals and blogs. The Android devices did the same with pop-up ads of the BJP.

It was a clever strategy. Instead of direct advertisement to news portals, BJP’s think tank did it by investing in Google AdWord. Any portal in Himachal which is using Google Adsense is automatically covered through the AdWord strategy.

However, it did not work on the websites that do not use Adsense like Himachal Watcher.  Further, if a user has AdBlocker installed, then this method is not fruitful.

Considering the frequency of appearance of the BJPs ads, it can be said the party had been the highest bidder for past couple of weeks.

If you are not aware of this marketing model, then it simply implies paying Google to display your advertisement with priority in the selection region and selected domains.

The AdWords is Google’s own service to allow businesses or individuals to advertise in the digital world. A user will have to provide a list of keywords to Google and ask it to display the advertisement materials depending upon the search engine history and keyword searched by other users.

These ads could be text-based search ads, graphic display ads, YouTube video ads, or in-app mobile ads. AdWords do not charge users for displaying ads. Instead, a user pays only when someone clicks an ad, views a video on YouTube, or calls your business.

It means, if a user wants his add to appear on priority, then he/she would have to bid against other marketers.

There is no limit in the bidding. Instead, it is solely about how much you’re willing to pay Google AdWords every time a searcher clicks on the ad.

It is called the cost-per-click. Therefore, based on the observed visibility through AdWord, the BJP seems to have spent a lot on it.

On the other hand, Congress appeared to be missing from the blogosphere and YouTube.

The Elections Commission had set the limit of expenditure on campaigning at 28 lakh per candidate.