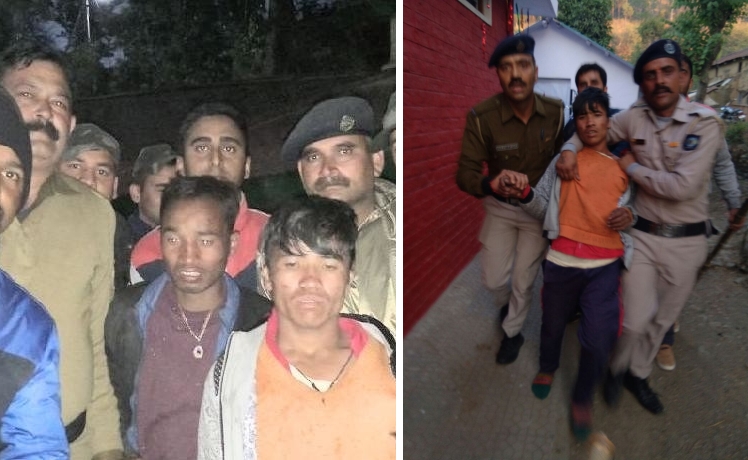 Shimla: In a major breakthrough, all three undertrial Nepalese accused, who had escaped from the Model Central Jail Kanda on the intervening night of December 5 and 6, have been arrested from the forests of Sayari in Kunihar, Solan district today.

The swift action of the police is gathering praise for from people in a time when the police department was facing embarrassment in the Kotkhai’s Guidya rape and murder case.

The Director General of the Police, Himachal Pradesh, Somesh Goyal and the Superintendent of Police, Shimla, Soumya Sambasivan, confirmed the arrests. The DGP appreciated the joint efforts of the Shimla and Solan Police.  He also appreciated the support extended by the locals.

As per the initial reports, the police first nabbed Prem Bahadur (22) from the same area. By evening, with the clues provided by the captured accused, the police succeeded in tracing the Pratap Singh (27) and Leela Dhar (22).

After the police circulated the photographs of the three accused, some locals spotted them in the area. The local informed the police after which an extensive search operation was launched in the area on Friday.

After the first arrest last night, the police teams led by the SP, Shimla, Soumya Sambasivan, were hopeful of finding the remaining two accused in the same area.  While the first accused was captured easily from a roadside, the police had to chase the other two.

As per the police, the two accused jumped over the bushes but were caught in barbed wire fences.

All three accused were barefoot, and said to have sustained some injuries while scaling the 16-feet high wall that surrounds the Jail. It slowed down their pace, said the police.

One of the accused is said to have bought some biscuits from a shop, which aroused suspicion of police about possible aid from some other person.  Otherwise, the accused had no resources, money or contacts to get out of the state.

The accused had managed to cut the iron bars of their barrack with a steel cutter and cross the wall with the help of some pipes/rods that were lying inside the premises for the ongoing construction of a new block.

Bahadur is facing trial in a rape case, Pratap Singh for raping a minor girl, and Leela Dhar for an alleged murder..

Two sentries were suspended right after the jailbreak, but no one has questioned the higher officials of the Jail staff yet.

The DGP admitted that it was a case of sheer negligence of the jail staff.  The incident also exposed the lethargy of the department in installment of sufficient CCTV cameras for the purpose of surveillance. The spot from where the prisoners scaled the wall had no CCTV. More revelations regarding the jailbreak would be available after inquiry, said the police.