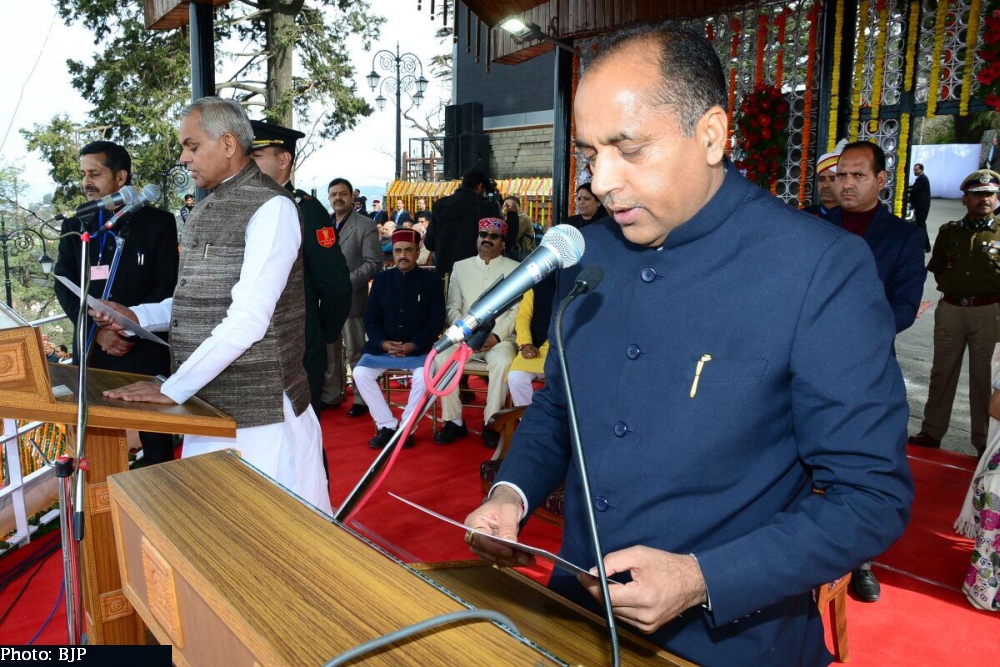 The name of the MLA Kishan Kapoor is said to have been added to the list of the ministers at the last moment. If Kapoor is included in the cabinet, then there would be 12 ministers this time.

Except for Mahender and Sarveen, all other faces are new.

For a change, MLA Govind Singh took the oath in Sanskrit. The oath ceremony was concluded with the national anthem.

MLA Rajiv Bindal has been appointed as the Speak of the Legislative Assembly.

#WATCH Oath taking ceremony of Himachal CM elect Jairam Thakur and others in Shimla in the presence of PM Modi https://t.co/UmlrABGVsI

In wake of the ceremony, a huge crowd of the BJP supporters had swarmed upon the historic Shimla Ridge Maidan.

In Shimla, relished coffee at the Indian Coffee House and reminisced old days. The coffee tastes as good as it did two decades ago, when I would frequent Himachal for party work. pic.twitter.com/XOYzlpLc43

Heavy security arrangements were made considering the gathering of BJP’s top leadership and Chief Ministers.

Heartening to see immense faith and support for the BJP among people of Himachal Pradesh. I assure the people of Himachal that the BJP government will set new records of development and progress in the state. pic.twitter.com/19FA6rWa7u

The BJP had wrested the power from the Congress by winning 44 seats out of total 68 in the assembly polls held on November 9, 2017. After the shock defeat of the BJP’s CM candidate, Prem Kumar Dhumal, it took a week full of suspense and drama for the BJP-high command to pick the new CM.

#WATCH Oath taking ceremony of CM elect Jairam Thakur and others in Shimla in the presence of PM Modi https://t.co/3mo97GEPcV pic.twitter.com/nNgpb8LXO4

Will do away with Himachal’s ‘retired & tired’ officers and VIP culture: Jairam