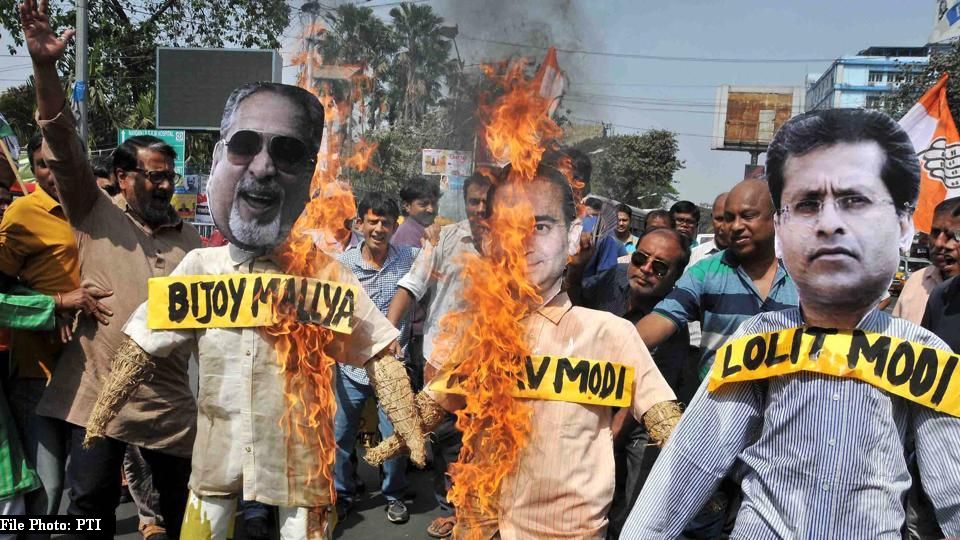 New Delhi: Amid PNB fraud row, the government has come up with a Bill to deter economic offenders from evading the process of Indian law by remaining outside the jurisdiction of Indian courts. The Union Cabinet has approved the proposal of the Ministry of Finance to introduce the Fugitive Economic Offenders Bill, 2018  in the Parliament.

The Bill makes provisions for a Court (‘Special Court’ under the Prevention of Money-laundering Act, 2002) to declare a person as a Fugitive Economic Offender.

The cases where the total value involved in such offences is Rs.100 crore or more will come under the purview of this Bill.

The Bill is expected to include measures to compel the fugitive economic offenders to return to India to face trial for scheduled offences.

The government claimed it would also help the banks and other financial institutions to achieve higher recovery from financial defaults committed by such fugitive economic offenders.

It is expected that the special forum would be created for an expeditious confiscation of the proceeds of crime, in India or abroad. It would coerce the fugitive to return to India to submit to the jurisdiction of Courts in India to face the law for their offences, claimed the government.

What does Fugitive Economic Offender mean

A Fugitive Economic Offender is a person against whom an arrest warrant has been issued in respect of a scheduled offence and who has left India so as to avoid criminal prosecution, or being abroad, refuses to return to India to face criminal prosecution.

What are Scheduled offence

As per the government, a scheduled offence refers to a list of economic offences contained in the Schedule to this Bill. Further, in order to ensure that Courts are not over-burdened with such cases, only those cases where the total value involved in such offences is 100 crore rupees or more, is within the purview of this Bill.

Silent features of the FEO Bill, 2018

If at any point of time in the course of the proceeding prior to the declaration, however, the alleged Fugitive Economic Offender returns to India and submits to the appropriate jurisdictional Court, proceedings under the proposed Act would cease by law.

All necessary constitutional safeguards in terms of providing hearing to the person through counsel, allowing him time to file a reply, serving notice of summons to him, whether in India or abroad and appeal to the High Court have been provided for.

Further, provision has been made for the appointment of an Administrator to manage and dispose of the property in compliance with the provisions of law.

There have been several instances of economic offenders fleeing the jurisdiction of Indian courts, anticipating the commencement, or during the pendency, of criminal proceedings.

The absence of such offenders from Indian courts has several deleterious consequences – first, it hampers investigation in criminal cases; second, it wastes precious time of courts of law, third, it undermines the rule of law in India.

Further, most such cases of economic offences involve non-repayment of bank loans thereby worsening the financial health of the banking sector in India.

The existing civil and criminal provisions in law are not entirely adequate to deal with the severity of the problem. It is, therefore, necessary to provide an effective, expeditious and constitutionally permissible deterrent to ensure that such actions are curbed.

It may be mentioned that the non-conviction-based asset confiscation for corruption-related cases is enabled under provisions of United Nations Convention against Corruption (ratified by India in 2011). The Bill adopts this principle.

In view of the above context, a Budget announcement was made by the Government in the Budget 2017-18 that the Government was considering to introduce legislative changes or even a new law to confiscate the assets of such absconders till they submit to the jurisdiction of the appropriate legal forum.