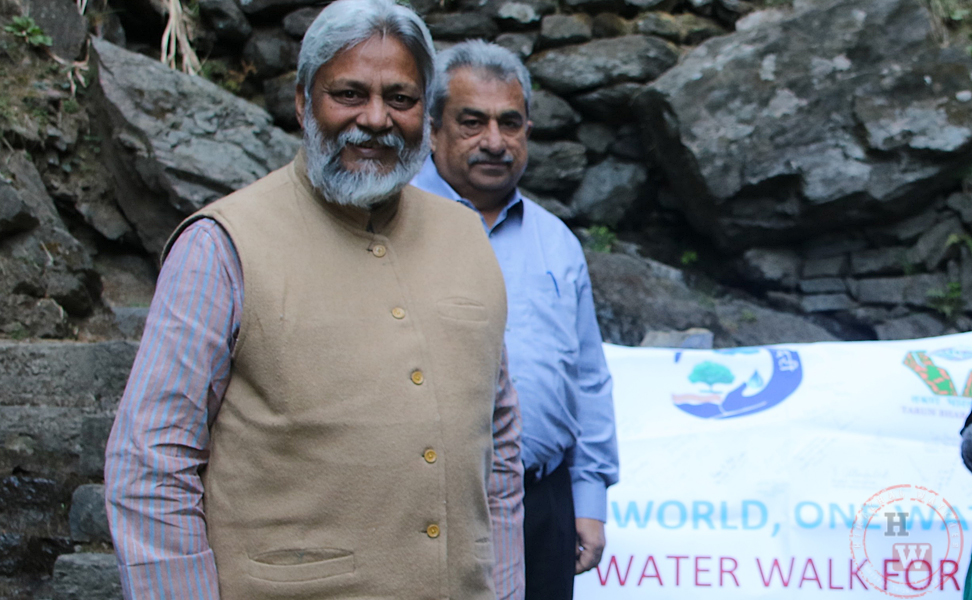 Shimla: The State Government on March 28, 2018, announced that a massive campaign about ‘water literacy’ would have to be launched in Himachal Pradesh to preach practices of water conservation among the people, informed the Chief Minister, Jai Ram Thakur during his address at the Workshop on Water Conservation organized by HP Vidhan Sabha at Hotel Peterhoff in Shimla.

Dr Rajinder Singh, a Magsaysay award winner, who is also called the ‘Water Man of India’, was also present at the workshop.  Rajinder Singh is credited for making water conservation a mission not only in Rajasthan but throughout the country.

The campaigns/workshops will be held at the Panchayati Raj level to involve the elected representatives to take water conservation initiatives effectively. Efforts would also be made to rejuvenate old water bodies and construct new structures for rainwater conservation, he said.

The Chief Minister also urged the MLAs to launch water conservation campaign in their respective areas so that Himachal could take a lead in this endeavour.

He said afforestation could also play a major role in water conservation and environmental protection.

Water conservation and water management is need of the hour and collective efforts of government, local bodies, and the general public should be mobilized in this direction, he said.

The leader of Congress Legislative Party, Mukesh Agnihotri, said that keeping in view the topography of different areas of the State, Himachal requires a separate strategy for each area for water conservation.

Dr Rajinder Singh said the Himachal Pradesh was lucky as it has about 180 cm annual rainfall but still the groundwater levels are declining at a greater speed.  He said about 70 percent perennial water bodies have dried up.

He stressed the need to work towards groundwater conservation and use of traditional water conservation system of India, which is universally acclaimed. He said that it was also needed of the hour to use natural resources judiciously.

The workshop concluded that it is the duty of each citizen to rejuvenate water sources and save water for future generations and that involving community participation can go a long way in effective water conservation to ensure water availability and rejuvenation of traditional water sources.

HIMUDA employees to get additional DA and interim relief

Shimla-Himachal Pradesh reported 10 COVID-19 deaths on September 24, 2020, which took the state’s death tally to 145. This is the biggest single-day-spike in the fatalities – a matter of huge worry amid community spread. Kangra district reported the highest six deaths while Shimla, Chamba,  Sirmaur, and Kullu reported one death each. The deceased including eight males and two females were aged between 55-78 years. At least five of these deceased were patients of diabetes mellitus.So far,

Go through the reasons of deaths given by the state Health Department below:

According to the official update, 337 new positive cases were registered yesterday. The total for the state has now reached 13,386. (Scroll down to view statistics for all districts)

As part of the damage control, the Medical Superintendent of Shimla’s Deen Dayal Upadhyay (DDU) Hospital, Lokender Sharma, was replaced after a COVID-19 patient committed suicide inside the hospital premises. Dr Ramesh Chauhan has been appointed as the new MS.  The case has led to protests against poor facilities and mismanagement in COVID-19 hospitals in the state. The opposition even staged a protest on September 5.

Reacting to his removal, Dr Lokender denied any negligence on his part and said he had been working with insufficient staff and limited facilities. He also alleged that the administration did not consider his repeated complaint regarding the same. Himachal Pradesh Medical Officers Association (HMOA) has also pointed out that the state government has not done anything to chalk out a comprehensive strategy to deal with the pandemic. They also pointed out the lack of trained staff.

These developments, including a sudden spurt in the fatality rate among COVID-19 patients, are now exposing the poor preparedness of the state government. The government doesn’t seem to have any clue about controlling the spread. There is no data on the projected number of actual cases as it is not possible to trace all infected amid a community spread.

While there is a dire need to make more efforts to save lives, the government and the Chief Minister Jairam Thakur appear to be busy in preparing for the visit of the Prime Minister Narender Modi for the opening of the Rohtang Tunnel.

Shimla– Five more COVID-19 casualties were reported in Himachal Pradesh on September 23, 2020. According to the official update from the Health Department, a total of 280 cases were reported till 9:00 pm today . The COVID-19 death tally is rising at an alarming rate with the onset of a community spread. Currently, a total of 135 persons have lost their lives due to COVID-19.(Scroll down for district-wise statistics)

These deaths were reported from Solan (1), Kangra (2), and Mandi (2). The deceased aged between 58 years to 77. Read the reasons for deaths below:

Kotkhai Nagar panchayat of Shimal district was sealed today after four persons tested positive at the CHC, Kotkhai. However, there is one case which has increased worries for both the people and the administration.

According to the BMO, Kotkhai, one of these persons, identified as Kavinder Kanwar, runs a car parking at the Kotkhai Bazaar. He also runs a newspaper distribution agency in the same area and deals in mobile recharge business. He frequently handles keys of cars parked in the parking as part of his routine task, it was informed.

“It is quite possible that the concerned positive person has also surely visited several shops and public places in Kotkhai bazaar during the last four days. In this situation, it is difficult to find out the exact contact tracing history due to which there is a high risk of surface transmission and risk of a direct contact person to person,”

informed the Sub-Divisional Magistrate, Theog, in a notification issued today.

Therefore, the administration has declared the entire Kotkhai Nagar panchayat as containment zone and sealed it except for essential services for four days (till September 27th).

The local police have been directed to restrict any entry to or exit from the area. The BMO has been asked to undertake contact tracing and the Secretary of the Nagar panchayat area has been directed to sanitize the entire area.

A woman, who was tested positive for COVID-19, and was admitted to the DDU hospital, Shimla, ended her life on the intervening night of September 22-23. The exact reason for the suicide was yet to be ascertained.

Further, two suicides in Kangra district have been associated with the financial distress caused by the COVID-19 pandemic. One of the deceased worked at a fuel station.  The second person was a cab driver. According to the English daily, The Tribune, he had recently received a notice from the bank over non-payment of his loan that he had taken to buy a cab. These suicides are indicators that the people are in dire need of relief from the state government.

The COVID-19 fatality rate in Himachal Pradesh is on the rise as the death tally reaches 130 with 13 new deaths in the last two days. According to the Health Department’s official COVID-19 Bulletins, State reported seven deaths on September 21 and six on September 22.

Today, the state registered 331 new confirmed cases with which the COVID-19 tally for the state rose to 12769. Of this total, 4124 are active cases, 8491 have recovered, and 20 migrated to outside the state. The infected also include Nachan MLA Vinod Kumar.

Today, the highest cases were reported from Sirmaur district (79), followed by Mandi (66), Shimla 48, and Solan 38, and Kullu (25). (Scroll down to view more district-wise statistics.)
However, the actual number of cases could be higher as the state is in the community spread phase. No projection regarding the actual number of cases and deaths has been issued by the state government.

Meanwhile, Chief Minister Jairam Thakur said that people should refrain from going to crowded places and take all precautions. However, tourists thronging the state are hardly following any rules. After lifting all restrictions on inter-state movement, the state government is now preparing to open the inter-state bus services, which would fuel the community spread.  The people are already expressing their resentment with the decision to suddenly lift all restrictions on movement of tourists. Amid these uncertain circumstances, rising fatality rate is the main concern.