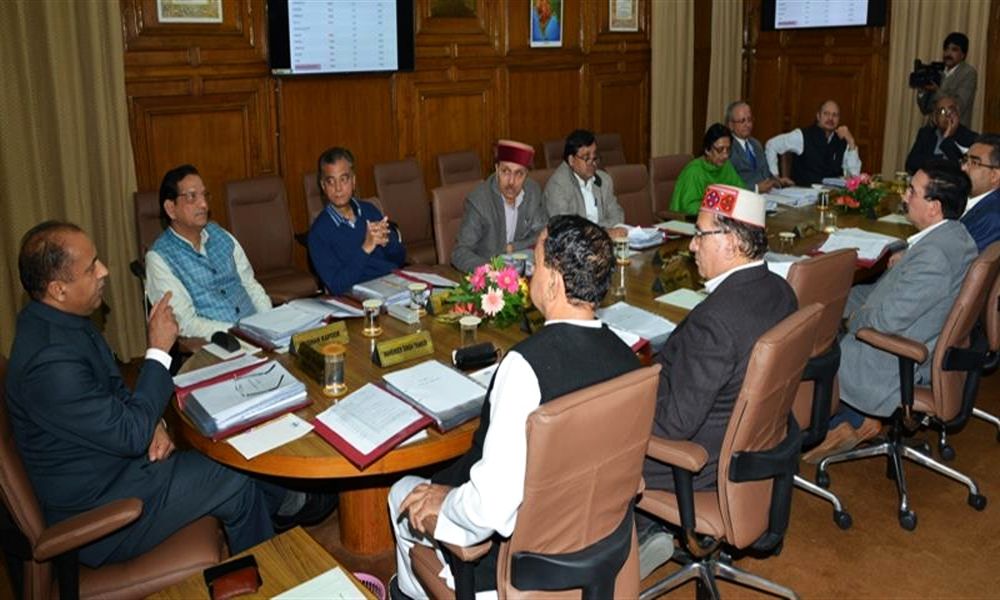 It decided that now entire power from the hydroelectric projects upto 25 MW capacity shall be mandatorily purchased by HPSEBL at the generic levelized tariffs as determined by H.P. Electricity Regulatory Commission.

It provided 4412 sq. meter land of Industries Department at industrial area Gondpur in Paonta Sahib of Sirmaur district for setting up of Common Effluent Treatment Plant to M/s Sirmaur Green Environ Limited as Special Purpose Vehicle on the lease of the token price of Rs. one by relaxing industrial policy.

Other than filling of 123 vacant posts of Forest Guards, the Cabinet gave its approval to fill up 35 vacant posts of Assistant Professor/equivalent in Dr. Y.S. Parmar University of Horticulture and Forestry, Nauni on a contract basis.

The Cabinet decided to start two new steams of B.Tech. Electrical Engineering and Diploma in Mechanical Engineering besides filling up of 21 posts of different categories in Atal Bihari Vajpayee Government Engineering College, Pragatinagar in district Shimla.

It also decided to create and fill up 10 posts of Junior Office Assistant (IT) on a contract basis and fill up four vacant posts of Peon in Sainik Welfare Department on a daily wage basis.

It also gave its nod to fill up 14 posts of different categories in Himachal Hospital of Mental Health and Rehabilitation Shimla for its smooth functioning.

The Cabinet put its seal on the creation and filling up of 14 posts of different categories in Municipal Corporation Dharamshala on a secondment basis.

The Cabinet gave its nod to increase the financial assistance (Old age Pension) of ex-servicemen and their widows from Rs. 500 per month to Rs. 3000 per month.

It also decided to provide 13 motorcycles to the Police Department for maintaining smooth plying of vehicular traffic in Shimla city.

It also decided to release Good Performance Incentive to employees of Himachal Pradesh State Industrial Development Corporation @ 8.33 percent of pay, subject to a ceiling of Rs. 35,000 for the financial year 2016-17.

The Cabinet decided to provide forest/government land measuring 1-22-28 hectare on a lease basis in favour of M/s Shakti Hydro Electric Company Pvt. Ltd. for setting up of 3.5 MW hydroelectric project in Mandi district.

The Cabinet also decided to enhance the honorarium by 20 percent per month from August 1 2018, of different categories of teachers appointed by the School Management Committee in various schools of the State Government.

The Cabinet decided to start ‘Dev Bhoomi Darshan Scheme’. The scheme envisages 50 percent concession in bus fare to senior citizens with age 70 to 80 years and above 80 years, it will be free.

The Cabinet gave its approval to launch ‘Jal Se Krishi Ko Bal Yojna’ in the State for water harvesting and runoff recycling of rainwater. It would increase the crop yields and farm income by optimum use of stored rainwater by constructing water conservation and harvesting structures such as Check Dams and Ponds. An outlay of Rs. 250 crore has been made for five years duration.

It also approved to start ‘Aaj Purani Raahon Se’ Scheme in the State saying it would boost cultural tourism and help in preserving the cultural identity of the State.