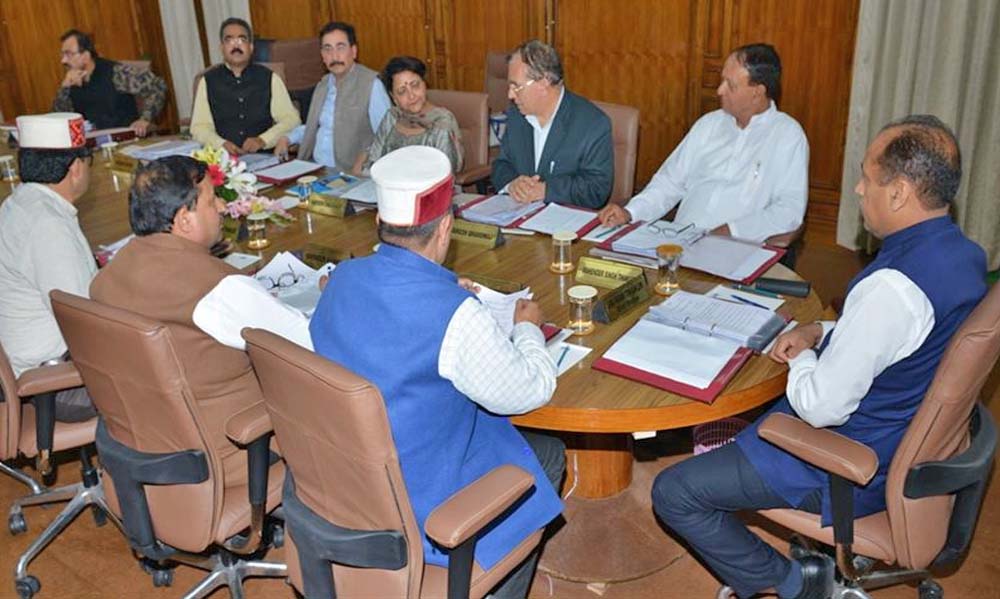 Shimla– A Himachal Pradesh Cabinet meeting was held on July 3, 2019.

The government has taken various decisions including to set up Lead Agency/Road Safety Cell headed by Director/Commissioner, Transport in the Directorate of Transport to ensure road safety and proper enforcement of road safety laws in the State. The Cell will monitor road safety activities in the state and will comprise of experts of Police, PWD, Education and Health Departments besides other supporting staff.

The government has abolished the state administrative tribunal, despite opposition by lawyers, who claim that the move will affect thousands of government employees. Earlier, it was abolished in 2008 during the BJP government. A resolution was also passed by the lawyers in this regard. As per them, abolishing the tribunal will cause unnecessary harassment to lakhs of state government employees.
On the other hand, the Chief Minister said that the ministers, party legislators, other elected representatives and organisation leaders were opposing its functioning, which is why this decision was taken. This decision is likely to trigger a controversy.

Keeping in view the difficult topography of Chamba district and to encourage faculties to serve in Pt. Jawahar Lal Nehru Government Medical College, Chamba, the Cabinet decided to provide an incentive of Rs. 50,000 to Professor, Rs. 30,000 to Associate Professor and Rs. 20,000 per month to Assistant Professor over and above the contractual emoluments. It also decided to provide an incentive of Rs. 15000 per month to tutors and senior resident doctors to encourage them to serve in this medical college.

The Cabinet gave its approval to enhance the financial assistance to the family members of the working journalists in case of death from existing rupees two lakh to rupees four lakh and for retired journalists from Rs. 50,000 to rupees one lakh under the ‘Patrakar Kalyan Yojna’.

It gave its nod to start a new ‘Sahara’ scheme in the State under which Rs. 2000 per month would be provided to patients of economically weaker sections suffering from identified serious diseases.

It decided to enhance the subsidy being provided to forest guards posted in 200 very sensitive beats for purchase of weapons from existing Rs. 12000 to maximum Rs. 15000.

Approval was given to purchase 79 motor cycles, 25 light vehicles, 7 mini buses, one big bus and two trucks in the Police Department.

The Cabinet decided to launch Mukhya Mantri Khumb Vikas Yojna in the State and rename it as Himachal Khumb Vikas Yojna. Under this scheme, assistance would be provided to all categories of farmers registered with the department for adopting mushroom cultivation.

Now, ex-servicemen will be deployed at 12 RTO barriers in Transport Department instead of Home Guards.

The Cabinet decided to increase the discretionary fund of MLAs from existing Rs. 7 lakh to Rs. 8 lakh per year.

The Cabinet decided to convert 1026 class-IV posts of different categories in Irrigation and Public Health Department into Pump Attendants and appoint the eligible water guards against these posts as per R& P Rules on a contract basis.

The Cabinet gave its approval in principle to establish one Additional District and Sessions Court at Sundernagar in Mandi district and one Civil Court at Jaisinghpur in Kangra district.

The 40 MW Baggi Hydro Power House was allotted to Bhakra Beas Management Board for its execution.