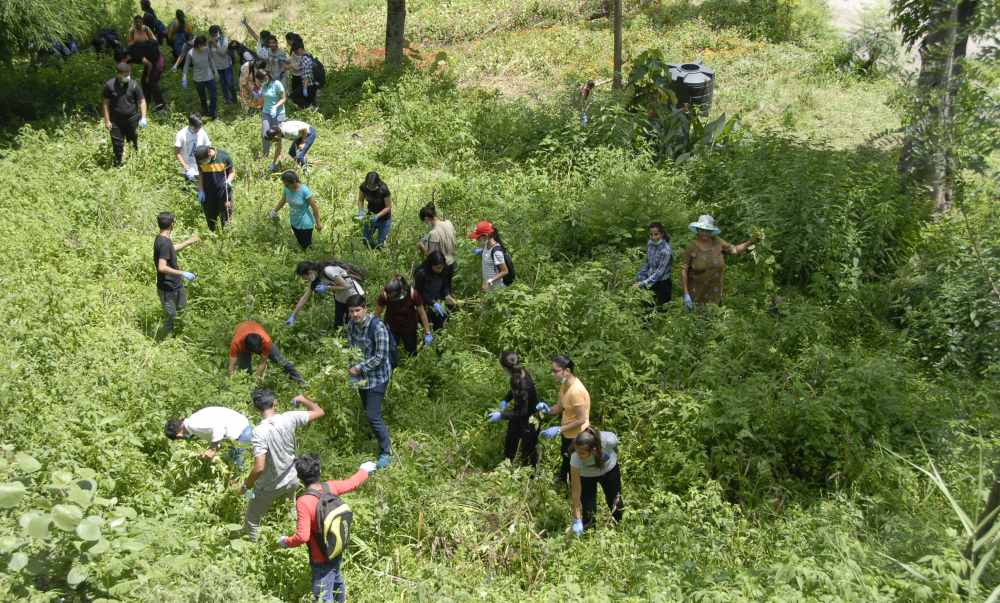 Solan-A parthenium eradication campaign was organized at the Dr YS Parmar University of Horticulture and Forestry (UHF), Nauni on Friday. The Department of Environmental Science and the Estate Office of the University organized the event under the Swachh Bharat Abhiyaan. All the university students, faculty and staff took part in the drive.

Parthenium weed is considered to be a cause of allergic respiratory problems, contact dermatitis, mutagenicity in human and livestock. Owing to this weed’s aggressive growth, it leads to the reduction in crop production and threatens biodiversity. 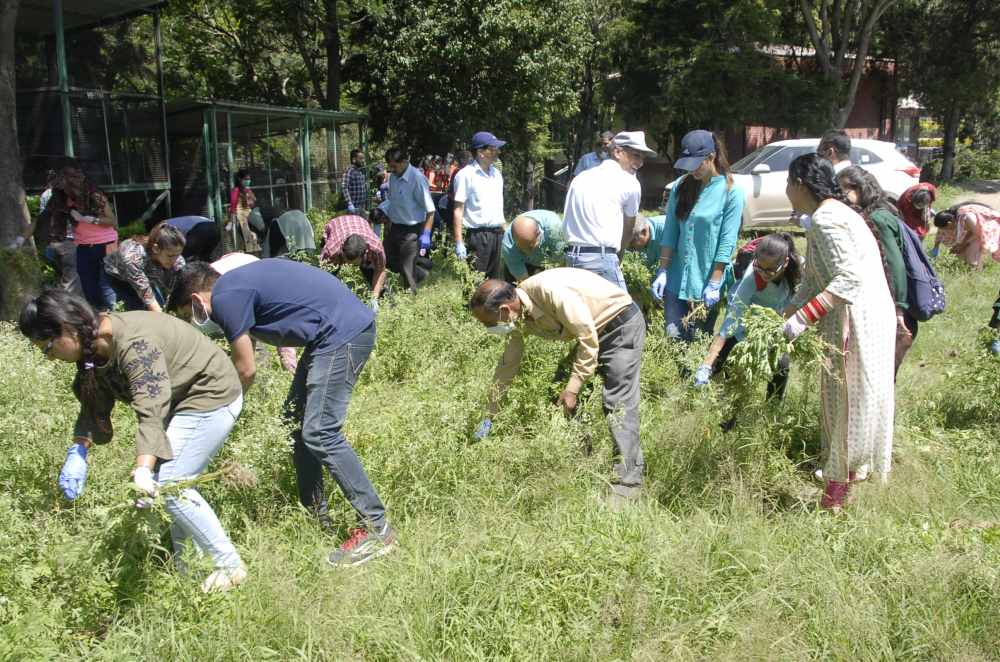 To undertake the drive, the staff and students were divided into nine teams with each group assigned the task of removing parthenium from different areas of the university. The drive was carried out under the watchful eyes of group facilitators and field guides. The proper disposal of the uprooted weeds was ensured by the disposal team. 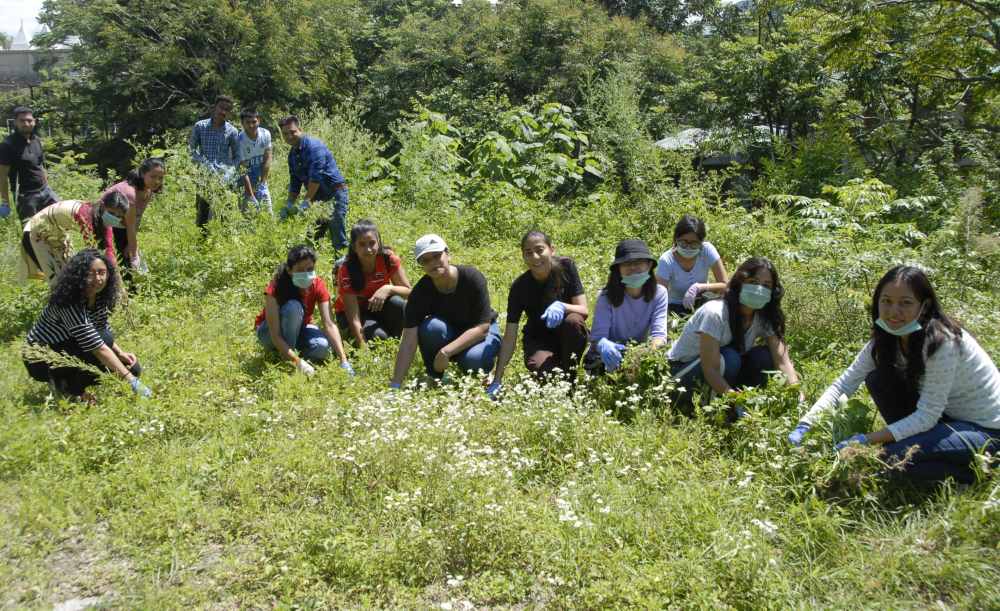 Addressing the gathering of staff and students, Dr Parvinder Kaushal, UHF Vice-Chancellor said it was important to organize such events along with tree plantation drives because they were important to conserve the biodiversity. 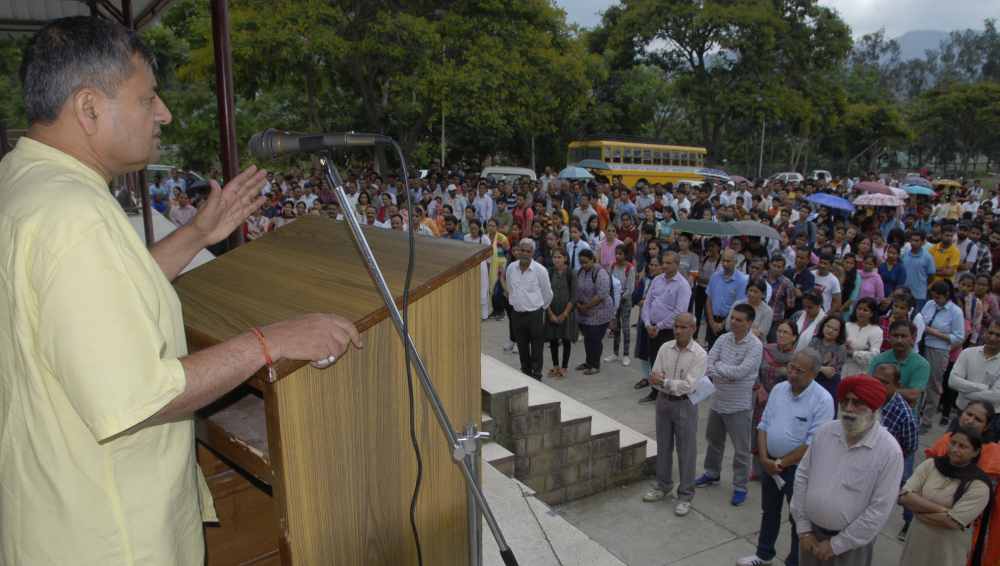 He asked the university staff and students to focus on the removal of the weed throughout the year. Dr Kaushal urged the university scientists to conduct further studies for the complete eradication of this weed.

Dr JN Sharma, Director Research of the university also spoke about the impact of parthenium on biodiversity and agricultural production. Earlier Dr SK Bhardwaj, Professor and Head, Department of Environmental Science gave an overview of the programme and the need for the eradication of the parthenium weed.

HP Govt Schools Lag Behind in Imparting IT Education, Put Future of Children at Stake

Dharamshala: The syllabus of Himachal Pradesh School of Board Education from 9th to 12th classes would be reduced by 30 percent following the lead of CBSE.  The Board today constituted a five-member committee for this purpose, informed Chairman of HPBOSE, Dr Suresh Kumar Soni. The step is being taken considering the disruption to regular classroom study of students due to the COVID-19 pandemic.

The Board also held a workshop in which experts in Hindi, Political Science, History, Geography, and Psychology subjects gave their opinion regarding the syllabus.

Further, the Chairman said that emphasis would be laid on reducing the syllabus for the board classes. Exclusion of topics from syllabus would be done in accordance with suggestions received from subject experts, he said.

The teachers should keep in mind that the students do not remain deprived of knowledge but at the same time keep the stress of syllabus off them, he said. He asked the teachers to not include any questions in exams from the topics which would be excluded from the syllabus. A proposal regarding it would be submitted to the state government for its approval, he informed.

Earlier this month, CBSE had announced a reduction in its syllabus for students of class 9 to 12. For class 11, CBSE had excluded chapters on federalism in the Constitution, political theory sections on citizenship, secularism and nationalism. For class 12, India’s relations with its neighbours, sections on social movement, regional aspirations, the changing nature of India’s economic development, and the Planning Commission were excluded.

For class 10, CBSE had excluded the chapter on forest and wildlife in contemporary India from social science. Besides it, chapters on democracy and diversity; gender religion and caste, popular struggles and movements, and challenges to democracy have also be removed. For science classes, the students would not have to study the human eye functioning, a section on concepts of evolution, several practical experiments, like tests on acetic acid, mounting a leaf peel, and studying the comparative cleaning capacity of soap in hard and soft, water were also removed from the syllabus.

Shimla-Himachal Pradesh University has finally issued tentative date-sheets for the Under-Graduate examinations for the current session. The exams will start on August 17 and end on September 8. These are tentative dates and instructions with date-sheets said that dates may vary according to the situation but the pattern of the date-sheet will remain the same.

The date sheets are available on the official website of the varsity.

The Controller of Examination, JC Negi, informed that students can obtain their admit cards from the official website of the varsity. Exams would be held in two session – morning and evening.

It’s pertinent to mention that according to the University Grant Commission (UGC) guidelines, it was mandatory to hold examinations for the last semester of UG classes. The Commission had given an option to conduct these exams online, but the HP varsity isn’t prepared for it at all. Therefore, the students would have to appear at examination centres physically.

A section of students has been protesting against the UGC guidelines to hold exams amid a pandemic and at a time when the state is witnessing a sharp increase in the number of confirmed COVID-19 cases. The Student Federation of India had even staged a protest outside the Directorate of Higher Education, HP, a week ago.

The students said it would not be wise to conduct exams when the state is witnessing a sharp increase in COVID-19 cases. The Federation demanded that the UGC should instead promote the students of final year/semester too. They said their marks should be calculated based on the performance in all previous exams and assessments.

SFI argued that the varsity was already late in conducting examinations and it has no infrastructure to conduct online exams. Further, it argued that not all students in the State are well connected to the Internet and would not be able to take online exams.

However, Akhil Bharatiya Vidyarthi Parishad (ABVP) is supporting the UGC and Government’s decision to conduct examinations.

Following instructions (unedited) were issued with the date-sheets: