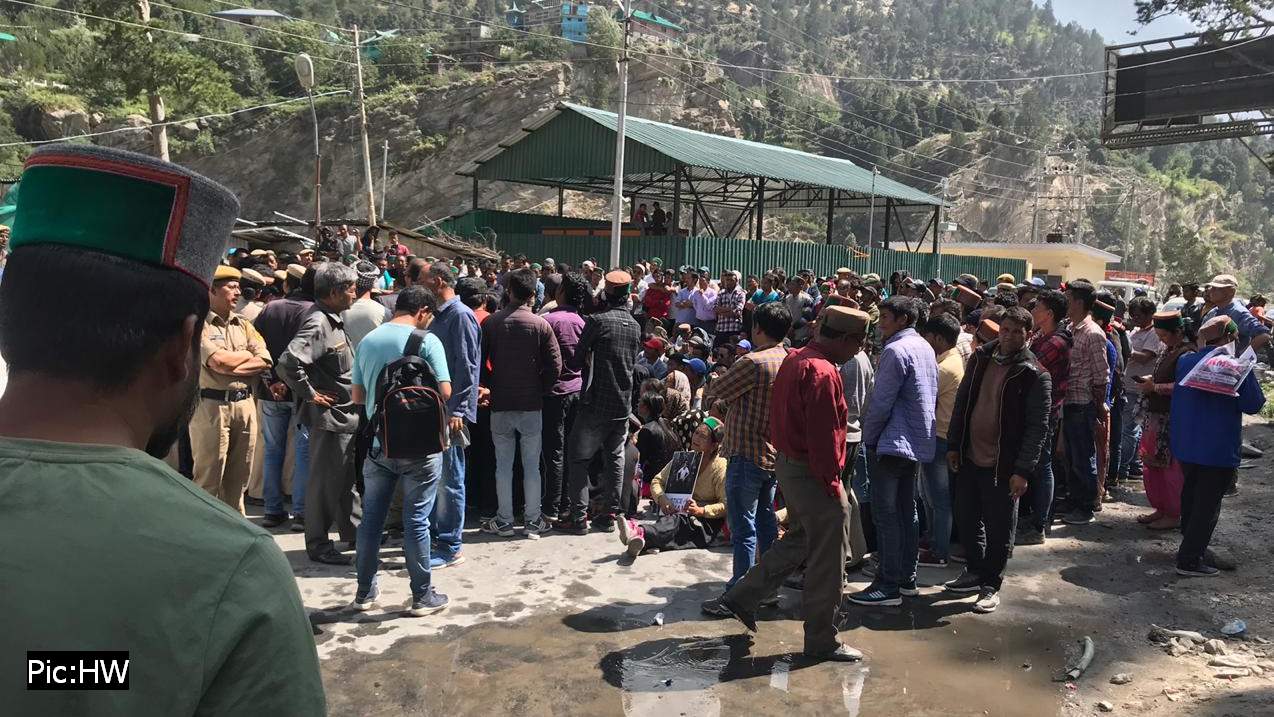 Kinnaur – Over the suspected murder of a youth in Kinnaur’s Pooh area following a scuffle with sand mafia, locals from several villages today blocked the traffic on the National Highway -5 near Powari. They demanded an enquiry by the Central Bureau of Investigation expressing concern that some wealthy and powerful people involved in this case are influencing the police investigation as well as the district administration. They alleged that owing to his influence on the administrative level, tricks are being played to save the main culprit. The agitation went on for about four hours before the road could be opened for traffic after the ADC agreed to send a request to Home Ministry for a CBI inquiry.

The case is related to Sonam Negi, a resident of Khab village of Namgya panchayat in Pooh area of Kinnaur district. On the night of September 7, 2019, Sonam had gone to Bhagat Nala on the banks of Sutlej river to fetch sand for the construction work of his building, which was ongoing. Three labourers accompanied him during this time. Some people were already present there, who were said to be related to the sand mafia. Over some matter, a brawl broke out between two parties. The three labourers reportedly fled the scene after the situation got ugly. One of the labourers informed the relatives of Sonam regarding the brawl.  The relatives informed the police.

However, by the time the police arrived at the spot, only Sonam’s vehicle loaded with sand and a pair of sleepers were found. Since this incident, Sonam went missing. Next day, when the police and villagers visited the spot again, they found stains of blood on rocks. Based on these stains, they suspected that Sonam was murdered and thrown into Sutlej.

Father of Sonam, Praksah Chand, filed a complained at the Pooh Police Station suspecting a murder. He also named some of the locals. However, the slow pace of investigation agitated the villagers who protested outside Pooh Police station for two days.  As per local sources, enraged villagers of about eight villages had gheraoed the Pooh Police station. The locals believed that some influential people including some contractors were involved in the case and that they were affecting the investigation.

Following the protests, the police arrested nine people in relation to the case after three days. A case was filed against all the accused under Section 302, 364, 341 and 34 of IPC. The police had taken all accused on a five-day remand on September 10. The report was confirmed by the Deputy Superintendent of Police, Kinnaur, Vipin Kumar.  He had also confirmed that the police was questioning the accused.

The remand period was ending today, however, still the police could not trace missing Sonam after eight days of his disappearance. The locals today showed distrust in local police and district administration and blocked the National Highway -5 demanding a CBI inquiry.

The enraged locals warned the administration that more people would join the protest if justice is not delivered to the victim. The villagers ended the agitation and opened the road only after the ADC assured that a request would be forwarded to the Home Ministry seeking a CBI enquiry and a search operation would be launched by the National Disaster Relief Force (NDRF) to find missing Sonam.

Local sources also suggested that villagers from more regions in the district were planning a massive protest.