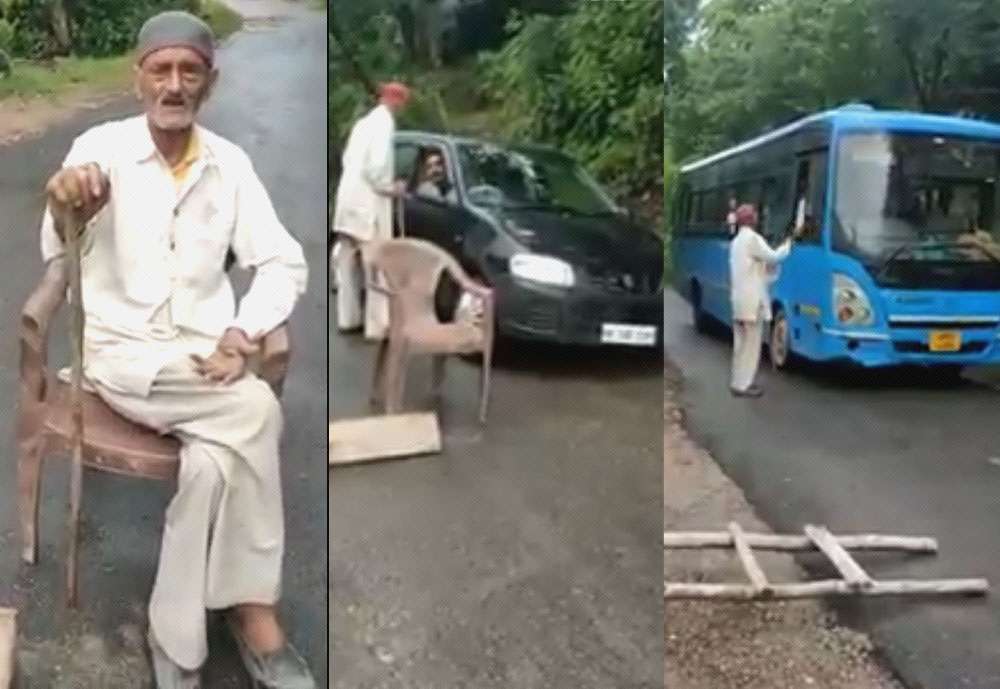 Kangra- A video of an elderly man, who has set up his own toll tax barrier on Majheen road (on Shimla-Nadaun road) in his village in Jawalamukhi constituency of Kangra district, is going viral on social media. The man has placed a chair and plank to block the road and is stopping every vehicle passing through. He is asking to pay only Rs 10 as toll tax.

In the video he can be seen stopping a car, asking for toll tax. When the person refused to pay, the elderly man is seen running alongside the car in protest.  The car was followed by an HRTC bus. The elderly man told the driver that he is collecting money through toll tax to construct his retaining wall. Someone from the bus gave him some money, and the elderly man at once removed the chair and plank to let the bus pass.

After the video went viral on social media, the man was detained by the police and was being questioned.

As per the information available on social media and through the audible conversation with the person who recorded the video, the retaining wall in front of this elderly man’s house collapsed, and now his house is also at risk of collapsing. The poverty-stricken man lacked money to re-construct the wall, therefore, he reportedly saught assistance from the BJP MLA of Jawalamukhi constituency, Ramesh Dhawala. As per the information available on social media, he did not receive any help. The posts on social media said that the elderly man was told that no matter how he arranges money, but he would have to spend from his own pocket for the construction of his retaining wall.

Following this negative response, the elderly man set up his own toll tax barrier on the village road. He said he would stop collecting tax once he collects enough money to re-construct the retaining wall.  It is a disheartening scene to see such an elderly person running after vehicles and arguing with people.

The public is condemning insensitivity of the MLA of the constituency. People commented that the government doesn’t have money for the public and the state is running on loans, but there is no dearth of funds for the facilities of the MLA and Ministers.

However, the MLA, while talking to a News Channel refuted the allegation that elderly man was denied assistance. He said the man was provoked by some youth to collect money by blocking the road.

New Rules Under HP Lokayukta Act Make it Mandatory to File Annual Return of Assets, Liabilities for Every Govt Employee