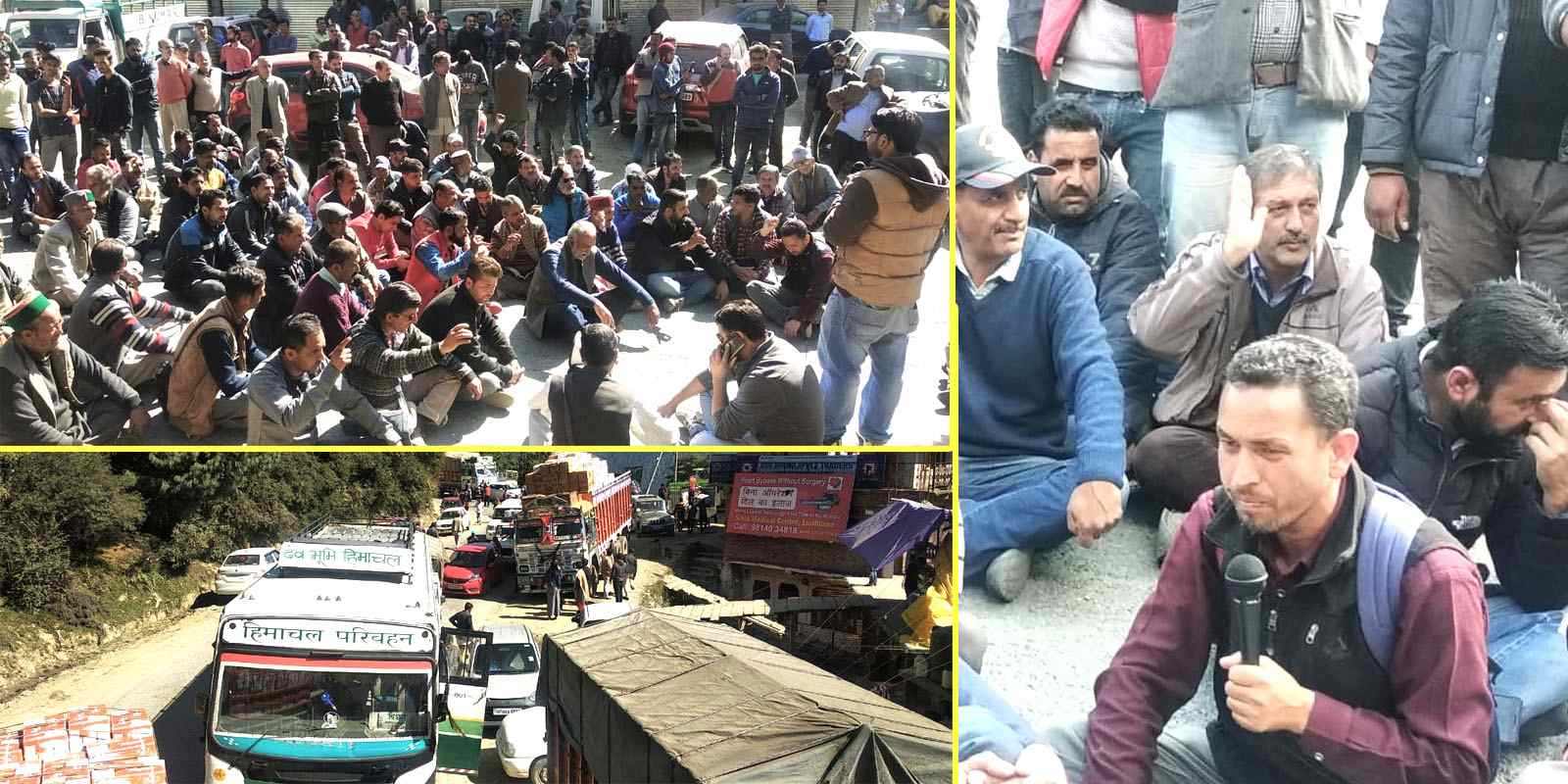 Shimla- Apple growers on October 16, 2019, blocked the Shimla-Narkanda Highway near Kainthla mode (curve) for about three hours as a protest against the inaction of the Agriculture Produce Marketing Committee (APMC) against defaulter commission agents who have not paid the growers for their produce.

Enraged farmers demanded action against fraud agents and only opened the road after the officials of district administration assured that action would be initiated from October 17, 2019, onwards.

It’s pertinent to mention that a large number of farmers have lodged complaints with APMC as well as CID against agents who haven’t cleared payments for their produce. A couple of months ago, farmers had even filed FIRs against such agents and had managed to recover some of the payments. A Special Investigation Team was also formed in response to protests staged by growers. However, the majority of defaulters are still at large.

The Agriculture Minister Ramlal Markanda has already expressed his helplessness in checking fraudulent practices and help farmers recover their payments by saying that the government does not have any control over APMC. He also claims that the new APMC Bill 2019 needs to be passed to gain this control.

Kisan Sangharsh Samiti led by MLA, Theog, Rakesh Singha, has been raising the issue of fraudulent practices in the apple market for several months now. Farmers have been alleging that commission agents, who are conducting business without a licence, are now disappearing without paying for the produce purchased from them.

Also, unjustified cuts were being made by commission agents while procuring apple produce.

Not only this season, but there are several growers who have not been paid for their produce since 2015. These pending payments amount to crores of rupees.

“JKB – a trader based in Narkanda- had been delaying the payments of several growers  worth crores after making purchases. He had assured that payments would be cleared on October 16, 2019. However, his office is closed, the phone is switched off for the last four days and he didn’t show up,”

“As the end of the season is approaching, such agents are fleeing one by one under the nose of the APMC and administration,”

The farmers alleged that APMC is supposed to act against such defaulters under the provisions of APMC Act 2005 and help them recover their payments. However, neither APMC nor any other agency of the state government is willing to act.

There is a strict provision in the APMC Act that prohibits commission agents from conducting business in markets without a license. These agents are required to obtain a licence from the APMC or Agricultural Department. Also, these agents are required to deposit some amount of money as a guarantee to prevent them from cheating with farmers. In case, they fail to pay the farmers in time, APMC has the power to take action against them.

However, despite these provisions, APMC is in deep slumber, completely reluctant to act.

These agents have devoured crores of rupees from farmers under the patronage of APMC and the government, alleged the Samiti. It also alleged that inaction of APMC suggests that there is a strong nexus of government and commission agents that is looting farmers without any fear of legal action.

The farmers today also demanded that action should be initiated against culprit officials of APMC, who did not act timely on the complaints and indirectly patronized fraud agents.

The Samiti has given a deadline of October 26 and warned that more farmers would join the protest in future if the government still not acted.