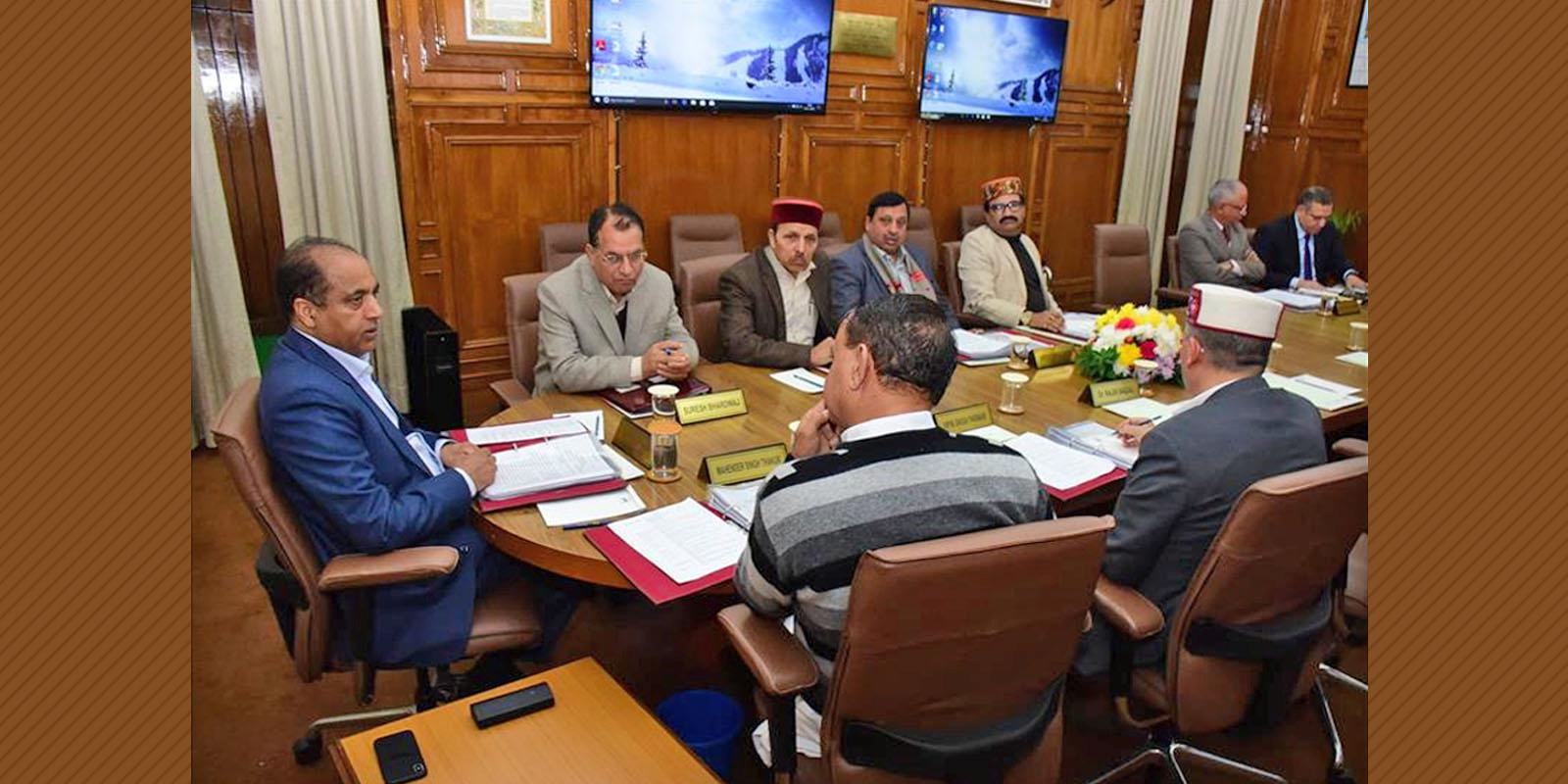 Shimla-A meeting of the Himachal Pradesh Cabinet was held on November 18, 2019.  During the meeting, the cabinet took various decisions and recommend the Governor to convene the Winter Session of H.P. Vidhan Sabha from December 9 to December 14, 2019, at Dharamshala in Kangra district. It will have six sittings.

The Cabinet gave its nod to notify Mukhya Mantri Dastkar Sahayta Yojna for providing 75 percent grant to Himachal artisans living below the poverty line on purchase of new equipment worth Rs.30,000.

The Cabinet gave its nod to fill up 200 posts of Ayurvedic pharmacists in Ayurveda department on contact basis out of which 103 posts will be filled up through direct recruitment and 97 posts on batch-wise basis.

It also gave its approval to request government of India for setting up of All India Institute of Homoeopathy in the government sector in the State.

It also approved the opening of Ayurvedic health Centres at Chhaparahan and Delag (Kateru) in Nachan assembly constituency of Mandi district along-with creation and filling up of six posts of different categories to man these centres.

It also decided to fill up three posts of homoeopathic medical officers in Ayurveda department on a contract basis.

The Cabinet gave its approval to Himachal Pradesh Miscellaneous Adventurous Activities Draft Rule, 2019   for ensuring the safety of the tourists involved in various adventurous activities.

It also gave its consent to Water Sports and Allied Activities Draft Rules, 2019 for encouraging water sports activities in the State.

The Cabinet also gave its nod to create and fill up four posts of different categories in newly opened Additional District and Session Judge Court, Sundernagar, district Mandi for the smooth functioning of the Court.

It gave its consent to open Sub Tehsil at Sulah in district Kangra alongwith creation and filling up of seven posts of different categories to run the Sub Tehsil.

The Cabinet decided to approve the medium-term sale of Government of Himachal Pradesh’s share of free power entitlement of 65.8 MW in Chamera-I Hydro Electric Project to Noida Power Company Limited through Arunachal Pradesh Power Corporation Pvt. Limited for a period of 13 months @ Rs. 4.02 per kWh. It also approved a trading margin of Rs. 0.04 per kWh to Arunachal Pradesh Power Corporation Pvt. Limited for the period of the agreement.

The Cabinet decided to open Zonal Veterinary Hospital at Barnoh in Kutlehar Vidhan Sabha area of Una district alongwith creation and filling up of 11 posts of different categories.

It also decided to upgrade Veterinary Dispensary at Jahu in Bhoranj area of Hamirpur district to Veterinary Hospital alongwith creation and filling up of requisite posts.

The Cabinet also decided to enact Himachal Pradesh Gauvansh Sanrakshan and Samvardhan Act, 2018 from December 1, 2019, to ensure better care of the Gauvansh.  It also approved Himachal Pradesh Gaujatya  Prajanan Vidheyak, 2019, for the preservation and protection of indigenous cows.

The Cabinet decided to provide the annuity (Baar) amount to the winners of gallantry and distinguished award winners each time he/she has won the particular award.

It also decided to enhance the financial assistance being given under Ex-servicemen Reconstruction and Rehabilitation Special Fund to ex-servicemen/widows of soldiers/dependents, who were not getting any pension.

The Cabinet gave its approval to open new Fire Sub Station in Bangana of Una district alongwith creation and filling up of 23 posts of different categories and purchase of three new vehicles for the Station for its proper functioning.

It decided to request the Government of India to upgrade Rajiv Gandhi Government Post Graduate Ayurvedic College, Paprola, district Kangra to All India Institute of Ayurveda for providing specialized ayurvedic health services to the people of the State.

The Cabinet decided to bring the transactions works of Forest Department under treasury mode throughout the State.