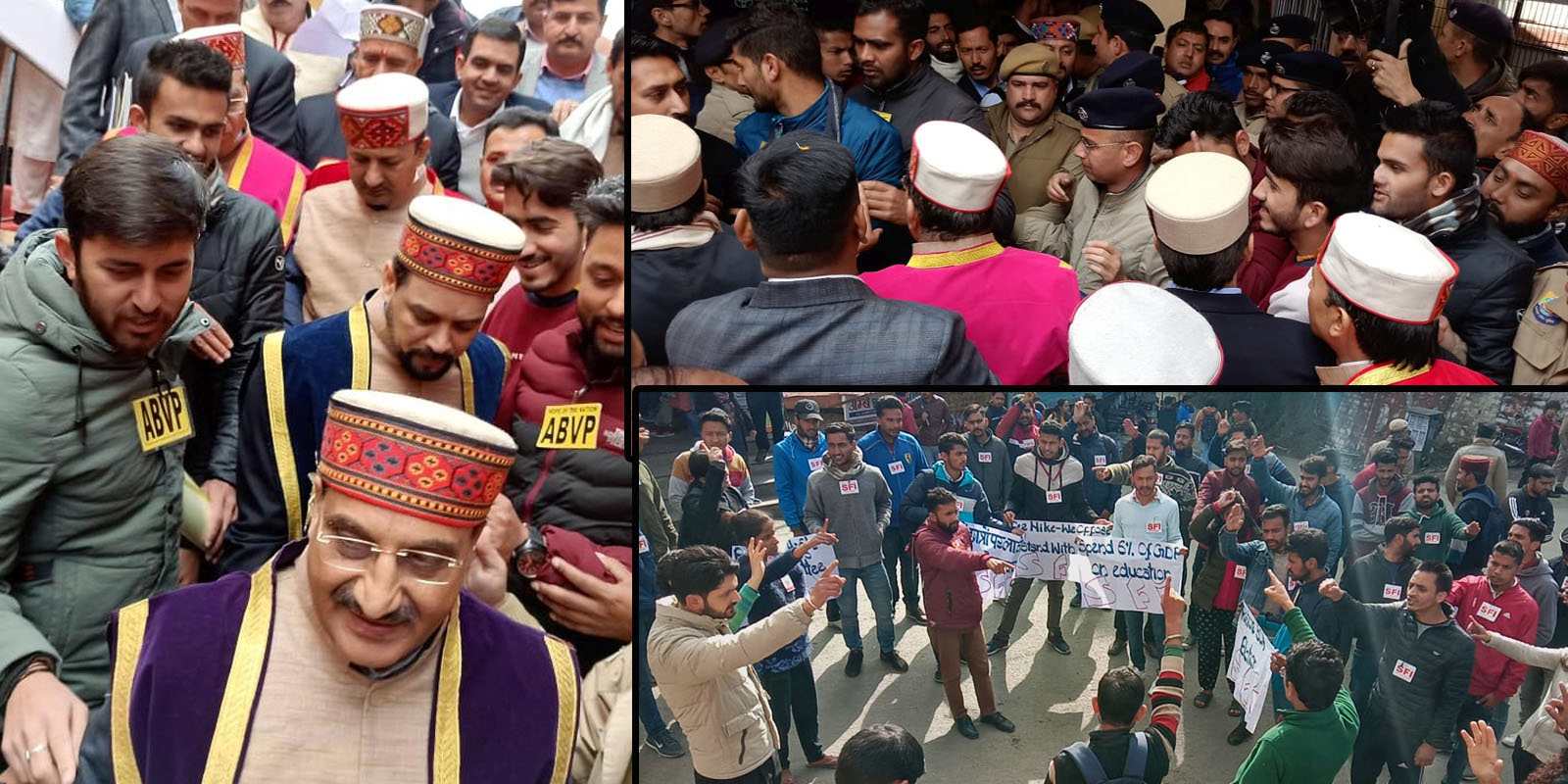 Shimla– The 25th Convocation of Himachal Pradesh University was held on November 29, 2019. As many as 448 Degrees and Gold Medals were awarded on the occasion to meritorious students, out of which 276 were females and 172 males. On the occasion, Vivek Kumar was awarded D.Litt Degree, whereas Afghan national Mohammad Sharif Shaheen was also awarded gold medal in Public Administration. 124 gold medals were also awarded today, out of which 87 gold medals are in the name of girls. Similarly, 189 girls are awarded PhD degree out of the total 323 students.

However, a large number of students who waited for the arrival of the Chief Guest, Union Human Resource Development Minister, Ramesh Pokhriyal Nishank, and Union Minister of State for Finance and Corporate Affairs, Anurag Thakur, were disappointed over the rude and indifferent behavior of these guests.

Not only HRD Minister spared no time to listen to the grievances and issues of the varsity students, but Anurag also ignored them, the student delegations said. The students said they were shocked to see that these Ministers directed police to repulsed them.

Students from both major student organizations, Akhil Bharatiya Vidyarthi Parishad (ABVP) and Student Federation, who had been waiting since the morning to meet the Chief Guest, condemned such behavior on the part of the HRD Minister, Anurag Thakur, Education Minister Suresh Bhardwaj, and Governor and Chancellor Dattaterya Bandaru.

The students also condemned the behavior of police. ABVP said all that the students wanted was to bring some crucial issues like construction of hostels, IT labs, the establishment of a permanent campus for the central university etc. to the attention of the HRD Minister. They wanted to submit a memorandum regarding these issues. However, the Minister didn’t even listen to them, ABVP said.

“It’s evident from such an act on the part of Pokhriyal and Anurag Thakur that these leaders do not have any concern regarding the varsity or the issues of the students,”

Enraged over this neglect, ABVP shouted slogans against the Ministers.

“We wanted to submit a memorandum to the Minister regarding the demands of the students to make the report of the high-powered committee public, the matter related to increase in number of subsidized seats, and holding direct elections to the Students Central Association,”

“However, the delegation was repulsed using police force,”

SFI warned that in future any Union Minister visiting the varsity would be shown black flags. SFI also said that Chief Minister Jairam Thakur and Anurag Thakur were also present, but they did not raise any issue related to the varsity or the students.

SFI also staged a protest over use of police force on students of JNU protesting against hikes in fees. SFI said it’s a deliberate act of the government to hike fees in educational institutes across India to deprive socio-economically weaker sections of receiving education.

SFI also protested against the Governor holding him responsible for the death of Rohit Vermula. SFI said it’s the same man who was booked under the Prevention of Atrocities Act in 2016.