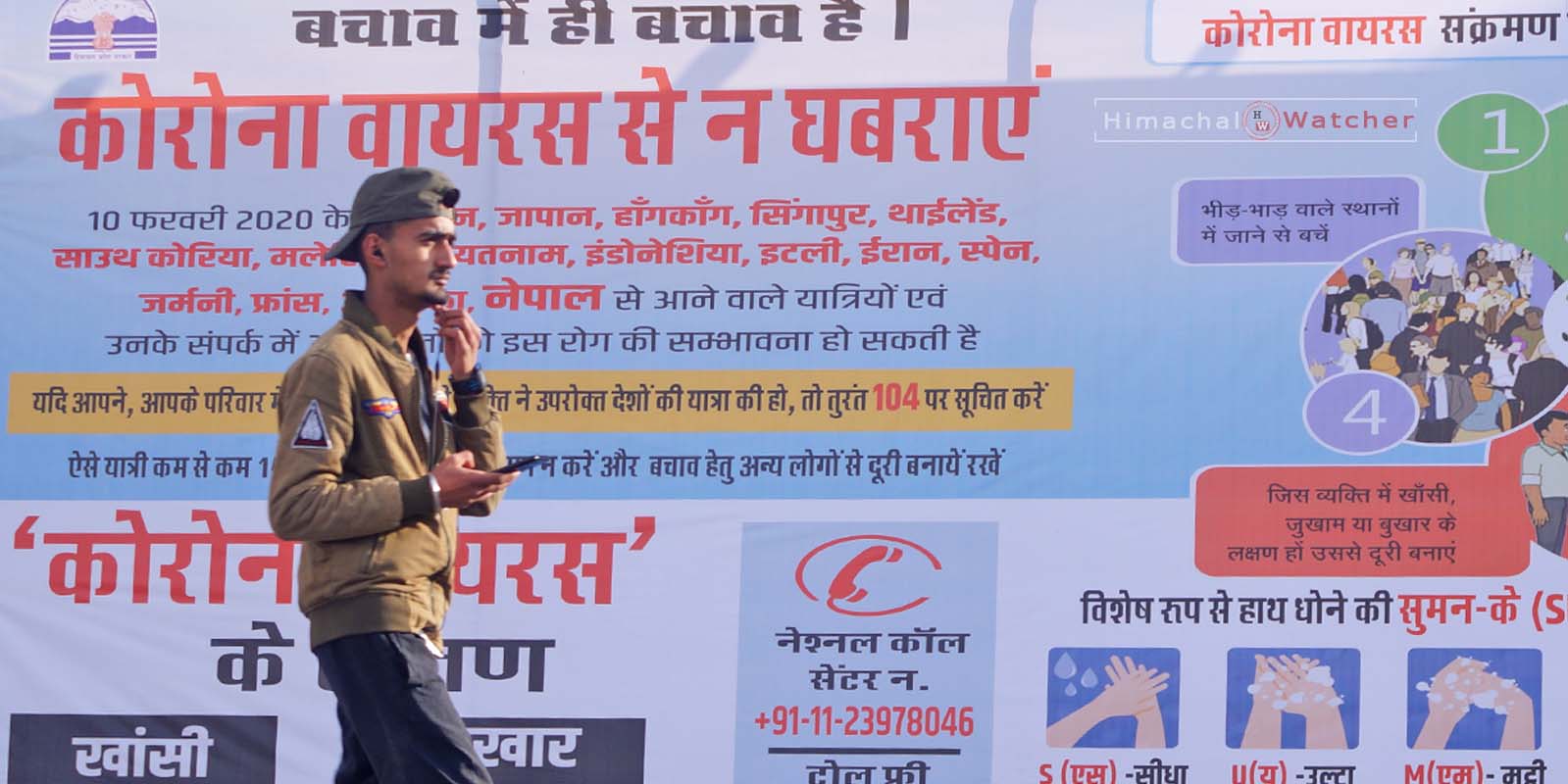 Shimla-Two people in Kangra District, Himachal Pradesh, have tested positive in the preliminary test conducted at the Tanda Medical College, the Deputy Commissioner, Kangra, Rakesh Prajapati, confirmed on March 20, 2020. With this the Hills State has report its first positive cases.

Chief Minister Jairam Thakur also confirmed that two cases have been found positive in the state from Kangra district in their preliminary reports and samples have been sent to Pune for further investigations.

Test reports of these persons are still awaited.

The number of total confirmed cases in India has crossed 200 mark with five deaths. The number continue to rise. 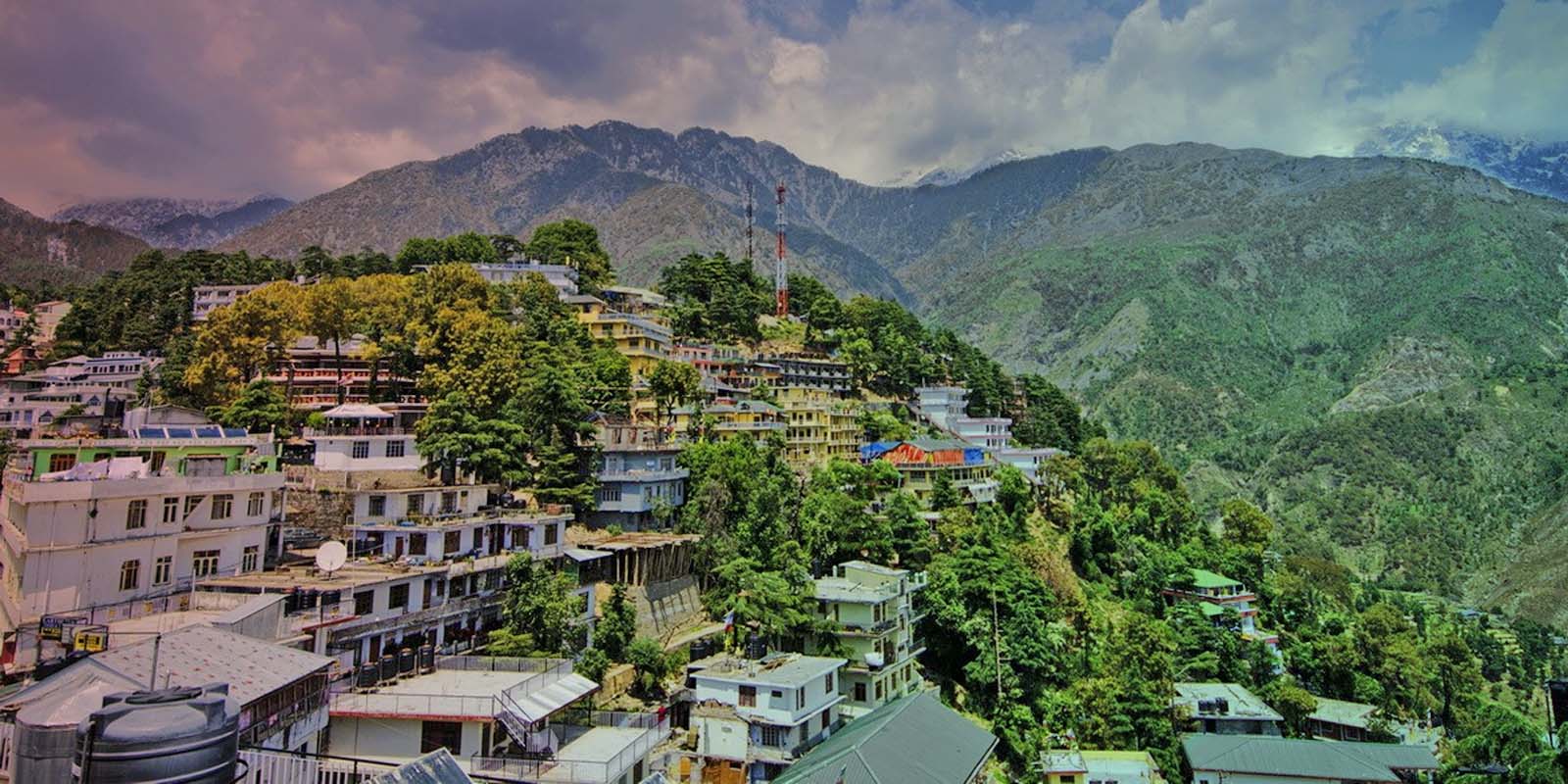 Dharamshala-The Hotel and Restaurant Association, Dharamshala, recently held a meeting under the Chairmanship of President Ashwani Bamba to discuss the Standard Operating Procedures (SOPs) issued by the Himachal Pradesh Government.

The Association said that the Tourism Department has made the condition of pre-booking of minimum five nights stay in a hotel mandatory. But prospective guests are not willing to accept this restriction.

“As even in the peak summer season, the average stay of a guest in any destination in the state is only for two nights. We cannot force the guest to stay for five nights in the rainy season,”

He said that the Association has also received feedback from its online as well as offline travel agents, who suggested that guest are not willing to travel to Himachal on these conditions.

“We fail to understand that when producing COVID-19 negative certificate has been made mandatory for entry to the State, what is the logic behind five nights mandatory stay,”

The Association also raised questions over the feasibility of implementing SOP regarding obtaining a certification declaring that a vehicle is sanitized.

“Who are the agencies authorized by the State Administration to issue such certificate and the validity of such certificate? Association feels that this is unnecessary and impractical and will only cause harassment to tourists,”

He suggested that instead of this condition, a self-declaration by the guest should suffice.

Further, the SOP asking hotel owners to allow guests to check-in even if they have high temperature and showing visible symptoms of cough and breathlessness is not acceptable to the hoteliers, the Association said.

Further, there is a fear among hoteliers that in case a guest turns out to be COVID-19 positive, hotel premises may be sealed. Also, the SOPs do not mention any directions/instructions regarding the period for which premises of such hotel would be sealed and the staff will be quarantined, the Association said.

“We suggest that instead of check-in the hotel, such symptomatic guest should be straight away sent to the Government COVID-19 health facilities for further medical check-up and quarantined at designated quarantine facilities till the arrival of his/her report,”

Further, the President said that due to the above-cited SOPs issued by the Department, the majority of the hoteliers are not willing to open.

The Association said that as the present set of SOPs is not favourable for prospective guests and hoteliers and there is an alarming rise in corona cases in Punjab, Delhi, UP, Maharashtra, Tamil Nadu, Karnataka, they were not expecting many tourists to visit the State. Therefore, the Association said, it’s not advisable to open the hotels till July 30th.

“We are requesting the Government to take into confidence the stakeholders and revise the SOPs, where it incentivises guests to visit the State and to remove unreasonable restrictions,”

Further, Ashwani informed that the Association has decided to review the SOPs and situation regarding corona cases on July 31 and the next course of action would be decided thereafter.

The Association has made it clear that if any hotel wants to open its premises with the present set of SOPs for the tourists, it may do so at his own risk.

What Hoteliers in Shimla Say About Opening Hotels

About 700 tourists visited the State in the last five days, informed Secretary, Tourism and Civil Aviation Devesh Kumar on Saturday.

He said that before framing the SOP for the opening of tourism units in the State, the Tourism department has examined the SOP of other states who have also opened the hotels for tourists in their respective State.

As per the advisory issued, the tourists who wish to visit Himachal Pradesh are required to register themselves on the E-Pass web portal before 48 hours visiting Himachal under tourist category. The tourists have to carry COVID test certificate (RTPCR) issued by ICMR certified laboratory with a negative report and this should not be more than 72 hours. In addition, the tourist must have downloaded Aarogya Setu App on their mobiles. 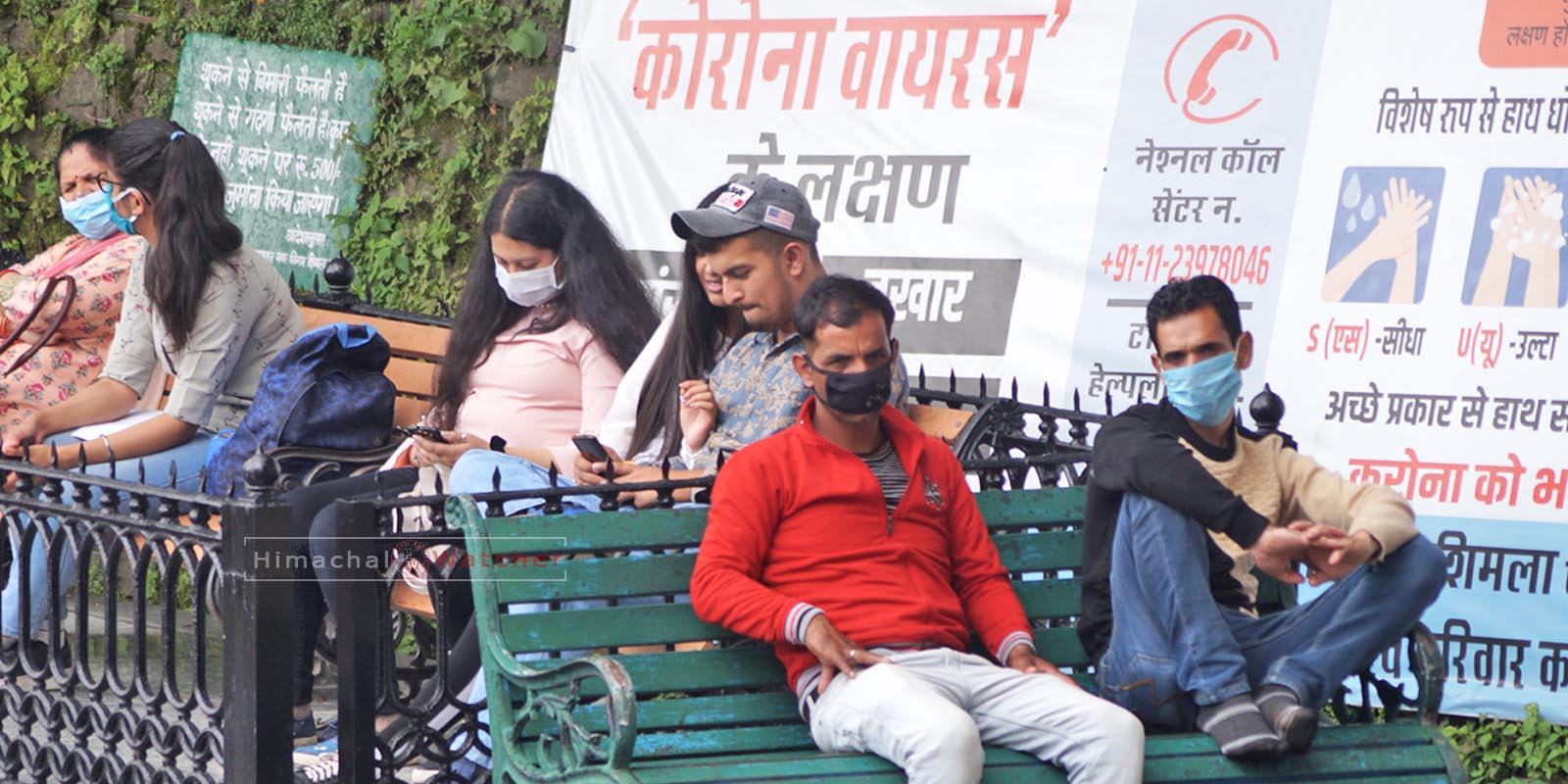 Una-The Amb police station in Una district was sealed and over 30 people including policemen were home-quarantined after a rape accused tested positive for COVID-19. According to the initial information, the police had nabbed the accused in Tarn Taran, Punjab, on July 9 and brought him to the Amb police station. SP, Una, Karthikeyan Gokulachandran confirmed the report.

In Kullu district, after a COVID-19 case was reported from Ward Number 7 of Kullu Municipal Council, the district administration has sealed area falling between Loarn, Khalada road on the northern side and Sarwari Khad on the southern side and declared it as containment zone. The remaining area of the ward has been declared as a buffer zone.

Earlier, the police line in Solan district was sealed and about 30 policemen were quarantined after two constables tested positive on Friday. Their samples were taken as part of routine sampling, and it was yet to be ascertained as to how they got infected. SP, Solan, Abhishek Yadav, confirmed the report.

ESI Hospital, Parawanoo, was also sealed after a doctor tested positive. The doctor is believed to have contracted the disease while taking samples for testing.

According to the official statistics released by the State Health Department on July 11 (9 PM), a total of 98367 persons have been tested for COVID-19 in the state. Currently, 20392 persons are under active surveillance. 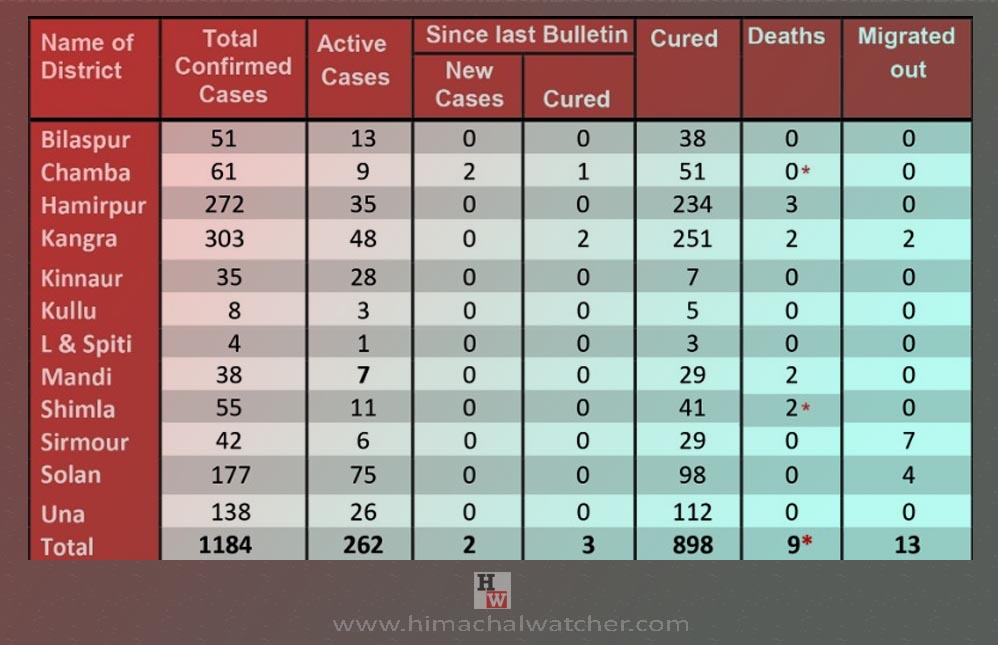 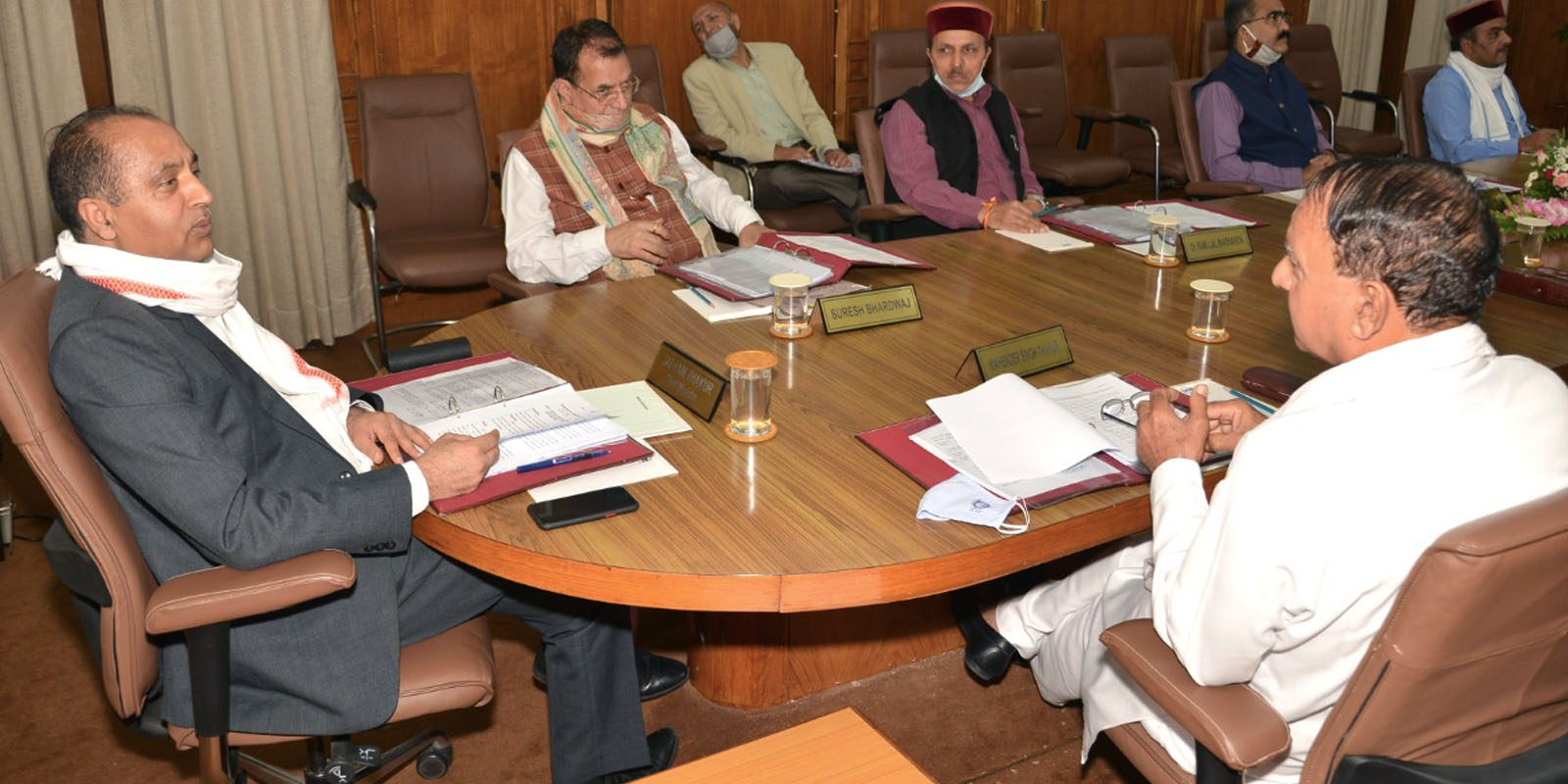 Shimla-Himachal Pradesh Cabinet said it is considering to give an approval to hike bus fare by 25 percent in the State.  The decision was taken in a Cabinet meeting held on July 10, 2020. The Transport Minister, Govind Singh Thakur, said a notification regarding the same would be issued soon. Private bus operators had been demanding hike in fares since the opening of public transport services. Most of the private transporters had declined to resume service with the State Government’s condition of 60 percent occupancy. The government had later allowed plying of public transport with 100 percent capacity, but the private bus operators still pressurized the Transport Minister to consider hiking the bus fare.

Though the official notification was yet to be released, the decision has already begun to face resistance from the people and oppositions.

The State unit of Indian National Congress, Shimla Nagrik Sabha and Communist Party of India have released statements questioning the timing of the decision. Former Mayor of Shimla, Sanjay Chauhan, termed this decision against the public interests as a hike has been made when the majority of people are going through a financially tough time due to the lockdowns in wake of coronavirus outbreak.

Further, Nagrik Sabha said that the private transporters and HRTC staff should have been provided relief by the state government but instead, the burden has been put on the public, which is not justified. About 70 percent of people employed in private sector and small businesses are partially or completely hit due to the corona pandemic, the Sabha said.

Further, the Education Minister, Suresh Bhardwaj, informed that the Cabinet has given nod to the Education Department’s proposal to start admissions in government schools and colleges from 13 to 25 July. The admissions in schools/colleges would facilitate the students who have passed Class 10 and Class 12. Students can apply for admission online, telephonically, or by physically visiting the schools/colleges, he informed.

However, no decision was taken regarding the examination of the first and second years students of under-graduation. In case it is decided to promote students of these years, the criteria would be set after further discussions, the Minister informed.

The Cabinet also gave its nod to the draft policy for engaging ‘Part-Time Multi Task Workers’ in government schools. It will initially provide an opportunity for 7852 eligible unemployed candidates to earn honorarium at the local level. These workers will be paid an honorarium of Rs. 31.25 per hour for six hours per day for ten months in an academic year.

State Cabinet approved the Industrial Employment (Standing Orders) Himachal Pradesh (Amendment) Rules, 2019. The government said it would extend the provision of ‘Fixed Term Employment Workman’ in respect of industrial establishments under their domain as per provisions of Industrial Employment (Standing Orders) Act, 1946 and Rules made thereafter. This would offer the ‘Fixed Term Employment Workman’ the same statutory benefits as were being proportionately given to regular workers, thus, decrease the exploitation of contract workers as the employer would directly hire the workers without any mediator in the form of contract for a fixed term, the government said.

Other Cabinet Decision of HP Govt

The Cabinet gave its approval to Himachal Pradesh Ease of Compliance to Maintain Register under various Labour Laws, Rules, 2019.

It granted its approval to adopt CPWD works Manual 2019 and other publication of CPWD in Himachal Pradesh Public Works Department.

The Cabinet gave its consent to establish a training academy centre at Barchwad in Sarkaghat area of Mandi district to train those youth who are willing to join Indian Army/Navy/Air Force and other paramilitary forces to serve the country.

It decided to enhance the honorarium of part-time water carriers engaged in Elementary and Higher Education Departments of the State Government by Rs. 300 per month from Rs. 2400 to Rs. 2700 per month.

The Cabinet decided to provide a monthly ‘Loktantra Prahari Samman Rashi’ of Rs. 8000 per month to those persons who have undergone 1-15 days incarceration and Rs. 12000 per month to those who have undergone 15 days or above incarceration during the emergency between 25th June 1975 to 21st March 1977 under MISA –Maintenance of Internal Security Act and DIR-Defence of India Rules as a token of respect to them for standing up for democracy and fundamental rights of the people.