Shimla-The COVID-19 death toll for Himachal Pradesh rose to nine with the death of a 70-year-old man at the Nerchowk Medical College and Hospital on Friday night. The victim was identified as a resident of Sujanpur area of Hamirpur district. The man was a patient of diabetes and kidney-related disease. Of the total nine deaths due to COVID-19, six have been reported in those suffering from a kidney-related disease.

The infected included an ASHA worker too. The six cases reported from Una district also include a policeman, who is said to be the driver of the DSP, Amb. Following the arrival of the report, the DSP Office was sealed and would be opened after sanitization. So far, the administration had not found any travel history of the infect policeman. Samples of about few policemen at the DSP office were not taken based on travel history or appearance of symptoms.

A factory in Nalagarh area of Solan district was sealed after a worker tested positive. The worker was reportedly staying at a housing colony and have a travel history. His sample was taken after he complained of fever, a district health official said.

According to the latest update received from the State Health Department at 5:00 PM, eight new cases were reported today from Hamirpur (7) and Kangra (1). The seven patients from Hamirpur reportedly belong to two families who had recently returned from Delhi. 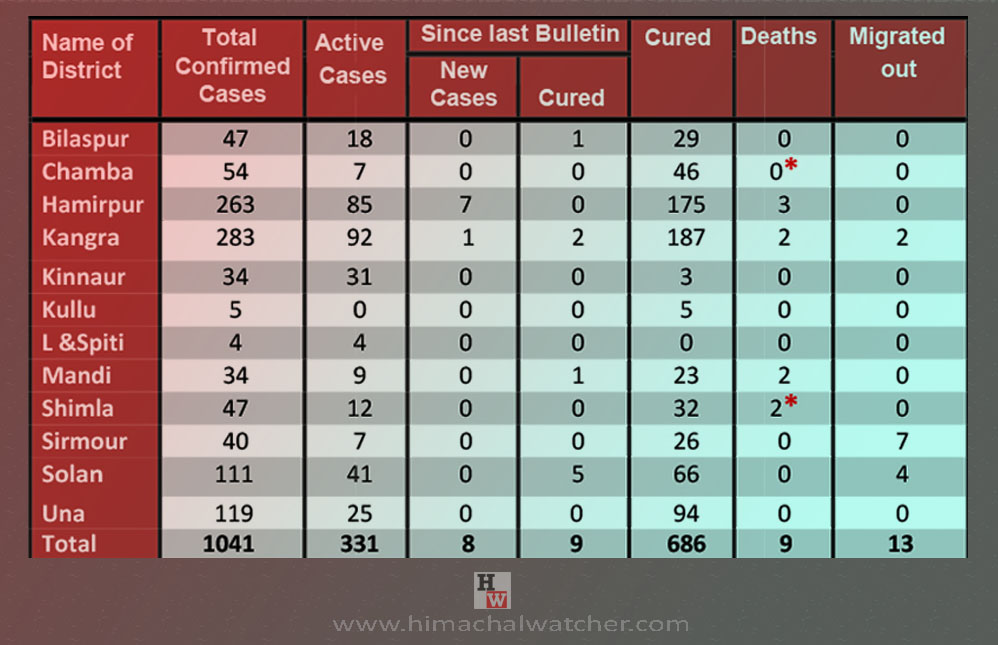 In terms of cases, Kangra district has reported 283 cases – highest in the State so far. Currently, the district has 92 active cases. Hamirpur district is right behind Kangra with a total of 263 cases, of which 75 are active.

Una (111) and Solan (119) districts have also reported a high number of cases. Kullu (5) and Lahaul-Spiti (4) are the least affected districts. In Kullu, the number of active cases is zero as all patients have been cured.

However, as the State Government has now issued a notification regarding the opening of State borders for visitors and has also allowed entry of tourists and tourism activities without the need for an e-pass or permission from concerned administrations. Public transport has also been allowed to run with 100 percent occupancy.

It would be no surprise if the number of cases witnesses a sudden spurt due to this decision of the Government.