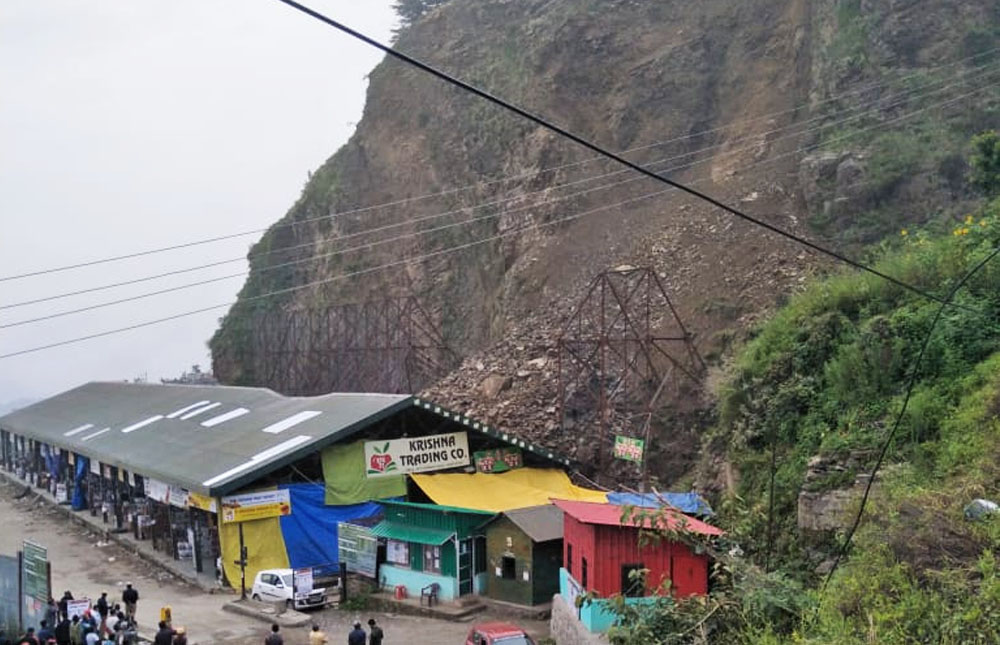 Shimla-A massive landslide damaged the apple market located in Bhattakuffar, Shimla, following which the market was closed for trading. Though the district administration has not revealed the exact number of boxed damaged/buried, the initial report puts the number in thousands.

The landslide occurred between 9:30AM to 10:00 AM on Monday. However, no loss of life was reported as the market was evacuated before the landslide hit it. Shooting stones prior to the landslide alerted the people present inside the godown.

According to the local apple growers and ‘aarthis’ (traders), the issue relating to a high possibility of a major landslide was brought to the attention of the district administration, as well as, APMC on multiple occasions, but no timely action was taken.  Eventually, not only a large amount of harvested apple was destroyed but the market was also closed for trading. As it’s the beginning of the apple season, traders and growers are likely to face a huge inconvenience due to closing of the market.

The Deputy Commissioner, Shimla, Amit Kashyap, who had reached the spot for an inspection, said that now the trading of fruits would be shifted to the vegetable market located in Dhalli. He said that traders have been asked to shift their business to alternative places like the market in Parala.

Traders and orchardists who faced losses are seeking compensation from the state government. The government was yet to make an announcement regarding a relief to the affected parties.

Himachal Kisan Sabha also expressed concern over the closure of the market and damage caused to apples due to the landslide. The Sabha has demanded that the loss incurred by traders and sellers should be compensated after assessment. APMC should immediately arrange alternative spaces for trading so that the ongoing season of apple doesn’t get affected, the Sabha demanded. It also demanded that APMC should erect a shed in the remaining area at Bhattakuffar market which remains unaffected from the landslide.

The Sabha has also demanded that the state government should consider long-term solutions including opening fruit/trading market outside the city, like in Shoghi, Anandpur, or any place with sufficient area.  Also, the government should start the work on pending markets in Daarni Ka Bageecha and Totu, the Sabha said. It will also give the city respite from frequent traffic jams, it said.