Community spread haunts Solan (381) and Sirmaur (130) districts as more cases continue to appear. In Solan, the industrial belt is the worst-hit. Seven more workers of Sara Textile in Nalagarh tested positive on Tuesday. Officials of the district administration and the Health Department are concerned about the situation and are trying to prevent a community spread. But the government maintains that the spike in cases is merely due to entry of migrant laborers and returnees from other states. 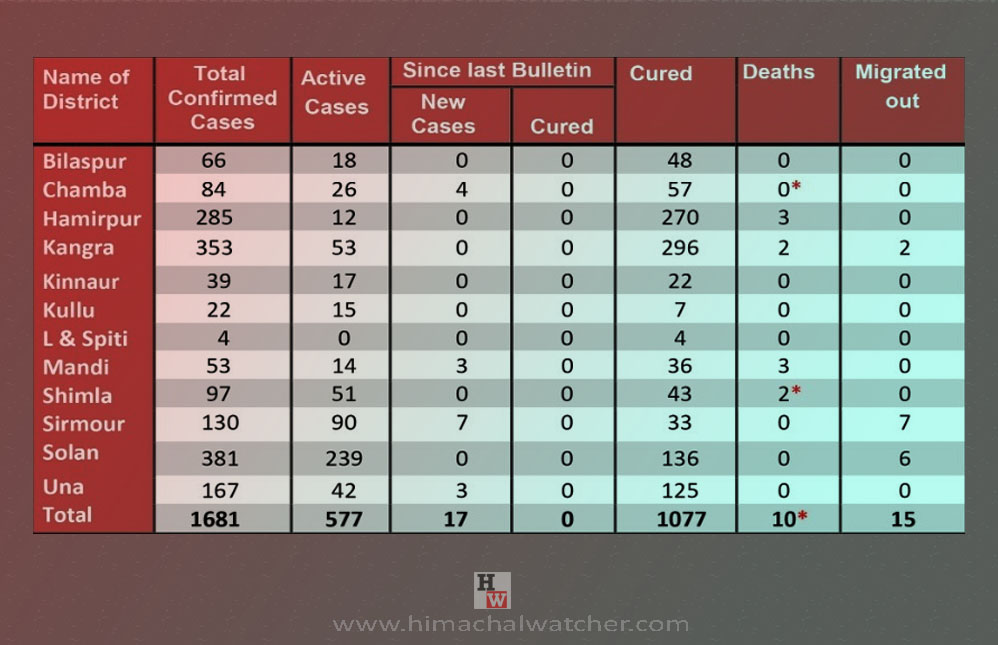 Sirmaur district reported 12 cases on Tuesday of which 10 persons belonged to Govindgarh (Mohalla) locality. This morning seven more reported to have tested positive in Sirmaur including five from Govindgarh that has become a hot-spot now. The locality alone has reported 75 cases within the last seven days. People in Nahan are also in a state of panic with this explosion in COVID-19 cases.

The district administrations in Solan and Sirmaur are compelled to review the availability of beds and medical facilities.

Today, a local leader of Bharatiya Janata Party in Mandi district and a staff member at the Chief Minister’s office tested positive. The staff member who tested positive is said to be a Deputy Secretary to the Chief Minister. Following the appearance of this case, the Chief Minister has been quarantined and samples of several other staff members and officials at the state secretariat would be taken for testing. Not much detail is available regarding the contact and travel history as of yet, there are speculations that BJP leader from Mandi had been meeting other leaders of the party regularly. The Deputy Secretary is said to have met the same leader recently.

The four cases reported in Chamba this morning includes an army jawan and a policeman.

Meanwhile, Additional Chief Secretary (Health) RD Dhiman has attributed the rise in the number of cases to the entry of migrant labourers to the state. Defending the state government’s decision to open the state for all including tourists, Dhiman said that no cases have been reported among tourists so far.  On Wednesday, Dhiman claimed that the spread of coronavirus is under control in the state. He also claimed that there is no threat of community spread and the state is doing much better than other states. The spike in the cases was temporary he had told media.

The number of COVID-19 cases in India is also rising fast with over 1.1 million people already infected and over 28,000 thousand dead. The Massachusetts Institute of Technology estimates that by the end of next year, India will have the worst outbreak in the world.

Ban on Transfers in Himachal, No Entry to HP Secretariat Without Pass