Shimla-The total number of confirmed COVID-19 cases in Himachal Pradesh has now crossed the 2000 mark with the appearance of 95 new cases on Saturday.

As per the Health Department’s COVID-19 Bulletin for July 25 (9 PM), this spike in cases has taken the total for the state to 2049, of which 840 are active cases. So far, as per the Bulletin, 1167 people have recovered and 11 died. Seven persons who have died were also suffering from other diseases and most were  patients of chronic kidney disease.

Among Saturday’s cases, Solan reported highest 35 cases, followed by Sirmaur (25) and Mandi (15).  The district administrations had yesterday announced a complete lockdown of two days in Nahan and BBN area after an explosion in COVID-19 cases.

In Solan, the Office of Superintendent of Police (Baddi) and the Barotiwala police station were sealed on Saturday after an accused of theft arrested on Thursday found to be positive on Friday. SP, Rohit Malpani confirmed that several policemen have been quarantined

After Solan and Sirmaur, a spurt in cases is being seen in Mandi district as it reported 26 cases on Friday and 15 on Saturday. Lamba Thach village in Seraj constituency was sealed following the appearance of these cases. However, Deputy Commissioner Rugved Thakur has rejected the speculations of community spread in the area. He said currently, the district administration has contact history of all those who were found positive. As a precautionary measure, shopkeepers in Janjheli and Gohar had decided to keep shops closed for the next few days.

In terms of the total number of cases, so far Solan district has reported highest 507 cases, of which 325 are active. Kangra (389), Hamirpur (293), Sirmaur (226), Una (178) are the most affected districts. Shimla (125) had already crossed the 100 mark, and Mandi (101) crossed it on Saturday. Lahaul-Spiti has reported the lowest number with on only four confirmed cases. 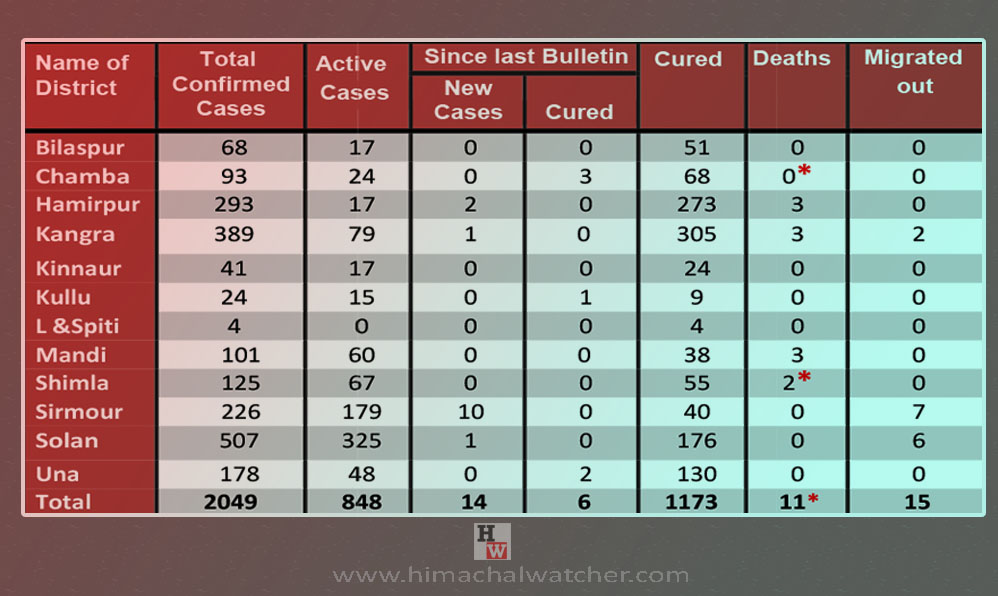