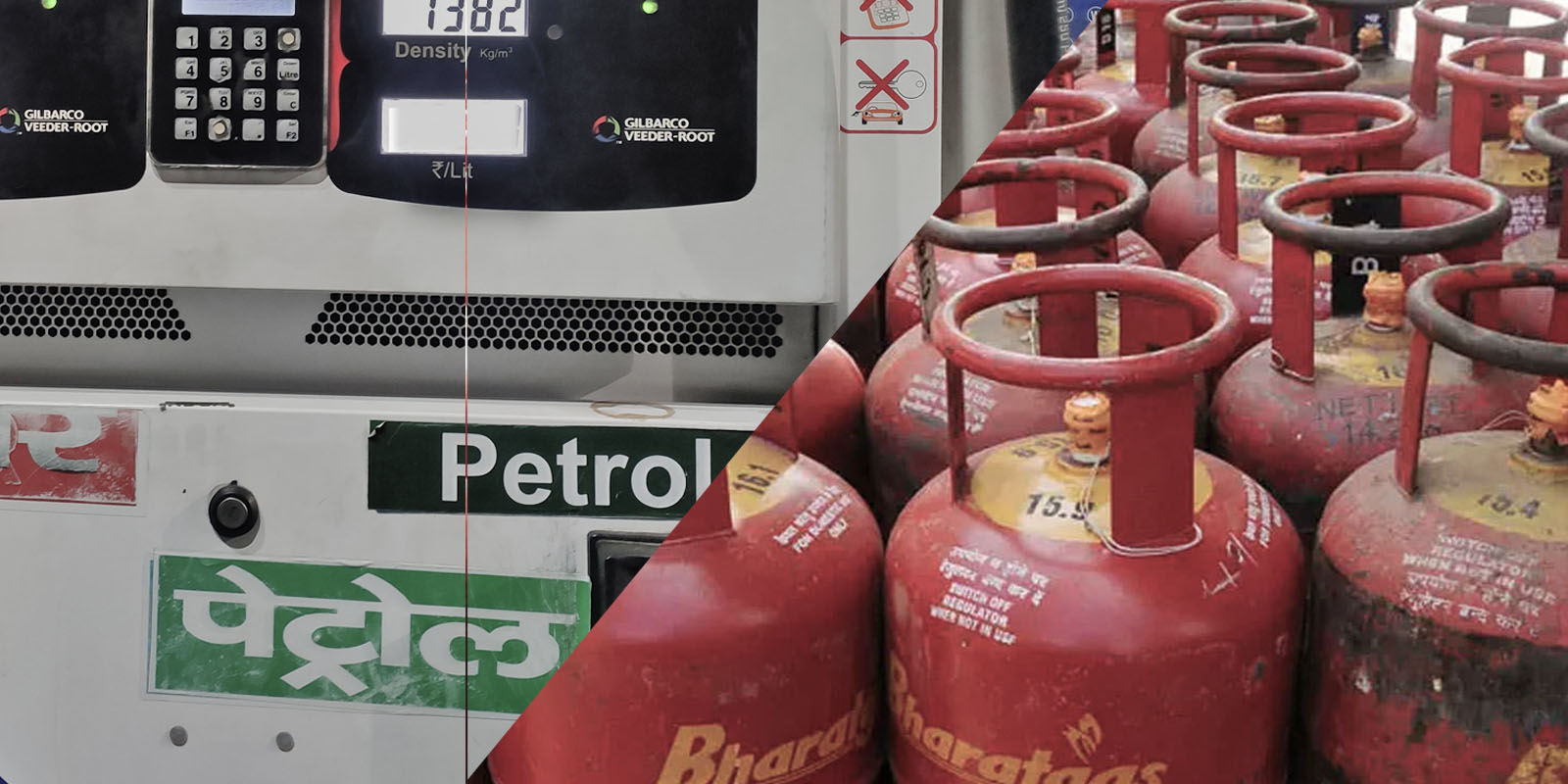 Shimla-Petrol and Diesel prices in India could be brought under control and their price could be reduced to Rs. 75 and Rs. 68, respectively, says the SBI’s Ecowrap report released by its Economic Research Department. The Indian Government can do this simply by brining these fuels under the ambit of the Goods and Services Tax (GST), the report said.

However, according to the report, lack of political will is keeping Indian oil product prices at one of the highest in the world. This lack of will arises from the fact that Centre and States are loathe to bring crude oil products under the GST regime as Sales Tax/VAT on petroleum products is a major source of own tax revenue for them. The states, in particular, would face a loss in revenue.

However contrary to this possibility, the government had been maintaining that it doesn’t control fuel prices. On February 17, 2021, on a day when petrol crossed the ₹100 mark, Prime Minister Narendra Modi had blamed it all on the previous governments.

The report said that one of the unfinished agendas of the current GST regime is bringing petrol and diesel under GST.

Every state has its own tax structure. The states choose to levy a combination of ad valorem tax, cess, extra VAT/Surcharge based on their needs. These taxes are imposed after taking into account the crude price, the transportation charge, the dealer commission and the flat excise duty imposed by the centre. The multiple taxes have made petroleum products prices one of the highest in the world, the report said. 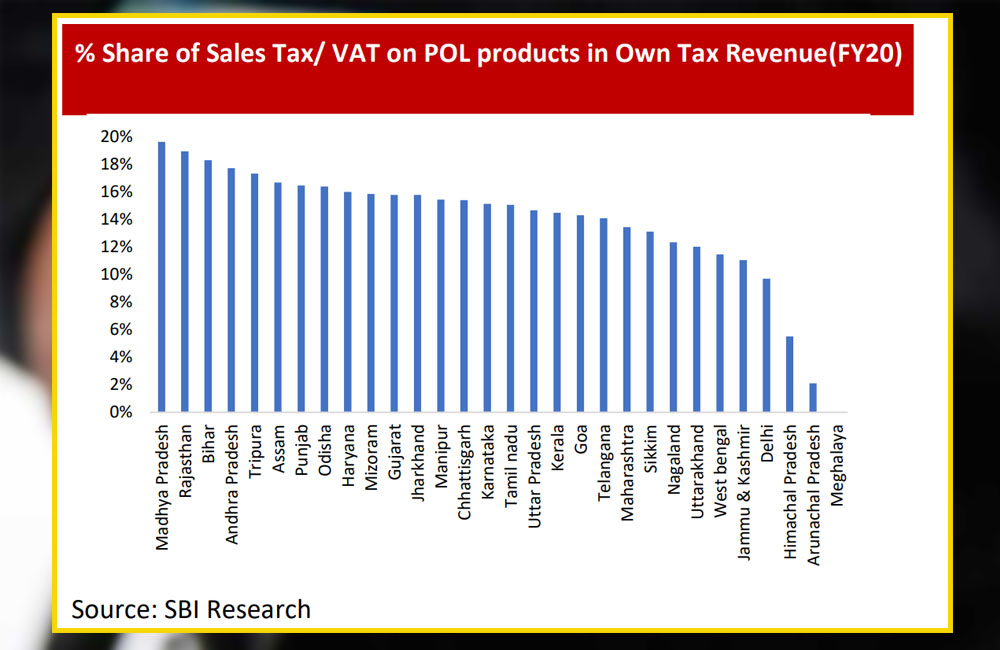 Using all these assumptions, the researchers have found that the base price for petrol and diesel comes out to be Rs 75 and Rs. 68, respectively at pan India level. At this base price, with multiple simulations Centre and States have a revenue deviation from budget estimates by only Rs. 1 lakh crore 90.4% of the GDP) after adjusting for the increase in consumption with the intended price cut.

The report further said that a dollar increase in the crude oil prices will push up the petrol price by around 50 paisa and diesel prices by around 150 paisa and bring down the overall deviation by around Rs. 1500 crore under the suggested baseline scenario.

If this tax structure is used for the Financial year 2022, when Centre and states taxes are already so high, we see that states which have the highest rates are losing revenue if they shift to this GST regime. But this flat taxation structure brings in uniformity and as per the calculations, it brings down the burden of taxes on the common man by almost Rs. 10-30 depending on the product consumed and the state in which it is consumed, the report said.

Additionally, it benefits some states which do not drastically tax their petroleum products, like Uttar Pradesh.

“Interestingly, our simulation exercise suggests that when crude oil/bbl declines by 10 dollars, Centre and states could save close to Rs 18,000 cres, if they keep the petrol prices at baseline Rs 75 and diesel at Rs 68 and don’t pass on the benefit to consumers,” the report said.

Further, the report recommended that the Government should build up an oil price stabilization fund which can be used in bad times for compensating revenue loss by cross subsiding fund saved from good times, without hurting the consumer.

Further, since November 2020, the prices of non-subsidized cylinders have increased from Rs. 594 to Rs 819 in Delhi, a substantial increase of Rs. 255 er cylinder. The data on DBTL (Direct Benefit Transfer for LPG) indicate that the subsidy amount has sharply plunged to merely Rs. 3,363 crores in April-December 20220 period from Rs 22, 635 in Financial Year 2020. There is negligible or no difference between subsidized and non-subsized cylinder. 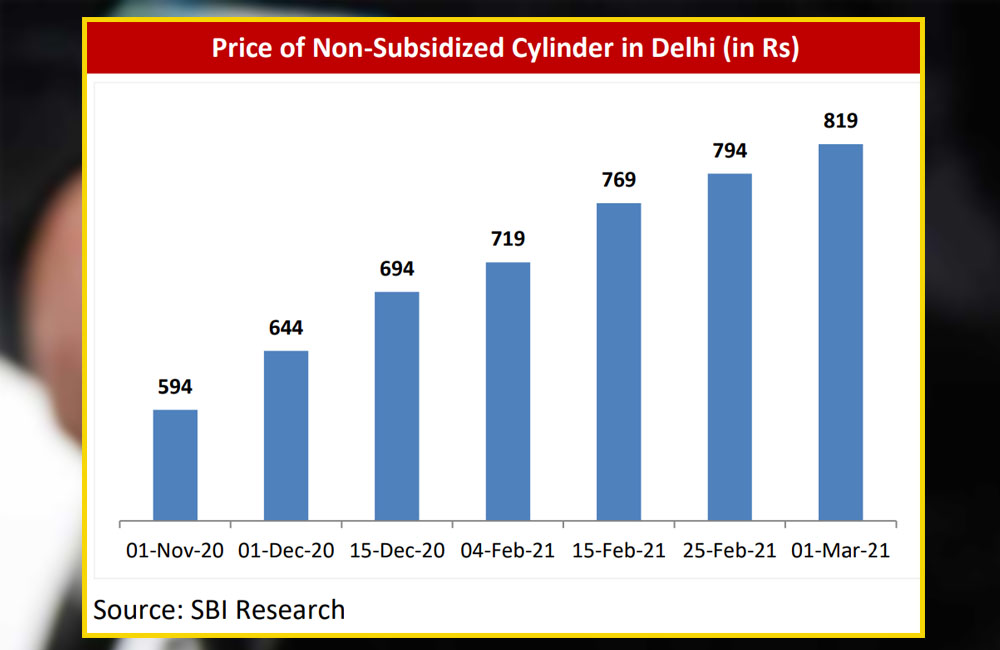 The report also said that though the government has announced to give one crore more free connections to the needy over the next two years, affordability barriers still exist. The government should focus on the affordability issue and to achieve this, the SBI researchers have suggested a set of measures.

Separately, for the LPG cylinders, the report proposed an increased and graded subsidy to provide to poor consumers which can be tapered off over a period of, say, five years. For this, the Government can create a comprehensive merged database using database of Ayushman Bharat, PM-KISAN, PMJDY, PMUY and MUDRA and then provide these people with maximum four free cylinders in a year. Even if five crore people are eligible for this then the total cost to exchequer per year will be maximum Rs 16,000 crore.

Besides, the report suggested that the Government might cancel its borrowing planed in the last two weeks of March 2021, totaling Rs. 49,000 crores.