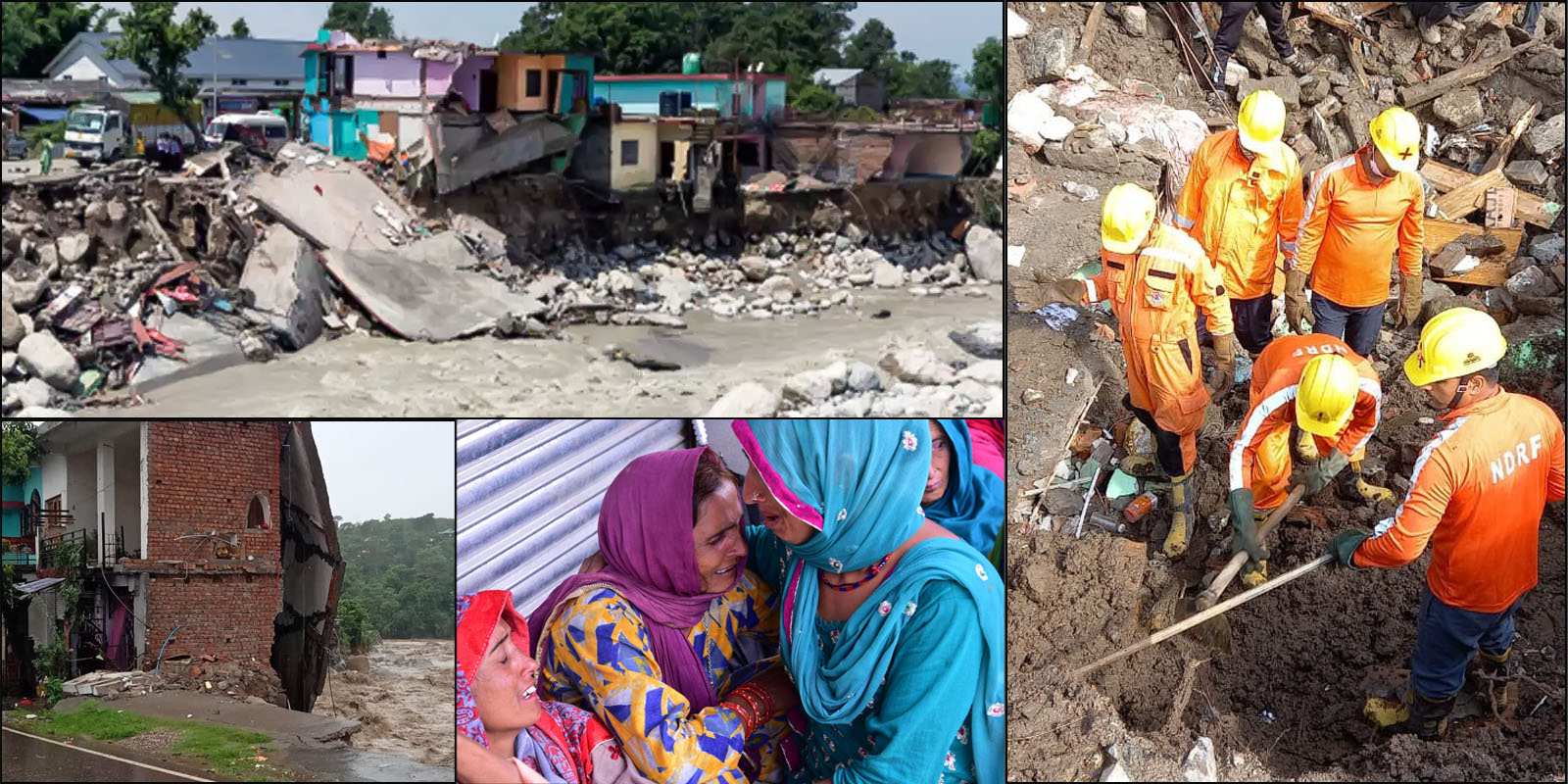 Shimla-Himachal Pradesh witnessed an episode of furious monsoon on 12th and 13th July that caused the loss of as many as 12 lives and extensive damages to personal and public property. Hundreds of roads were blocked due to landslides or swept away by rivers/rivulets in spate following a heavy downpour. Some areas also faced blackouts as hundreds of transformers and power lines were destroyed.

Kangra district, however, was worst hit with a flash flood ramming parts of Dharamshala town including Mclodganj. Videos on social media showed how gushing waters swept away vehicles and buildings like pieces of paper. At calamity unleashed its fury at a time when the town was overcrowded with tourists. Several of them lost their vehicles completely. Post the flash flood, people were seen wailing over their losses and trying to collect whatever was left.

Bhagasu Naag- a small waterfall that flows down as a narrow stream at a gentle pace-showed a vagary on July 12 and turned into a violent giant following heavy downpours in the upper catchment area of Dhauladhar ranges. The suspected cause is believed to be a cloudburst, however, no authority has confirmed it. The incident also highlighted encroachment and unplanned and illegal construction in the town area. The stream flowing down the Bhagasu waterfall is narrowing down due to encroachments. Over-construction, including illegal ones, have either covered the drainage spaces with concrete or shrunk them in size. This was one reason the flash flood took such a furious form and led to huge damages. Being a popular tourist hill station caused the commercialization of natural resources beyond their capacities in Dharamshala. Both local administration and people are equally indulged in this disaster.

Further, there were other areas where gushing water of rivulets swept through settlements, carrying away concrete bridges and inundating houses. In the area surrounding Gaggal airport, construction on encroached land also led to more damage. In nutshell, poor planning precedes the construction activity and paves the way for disasters, which could cause loss of both lives and property. Needless to say that corruption and callousness in administration made this possible.

Punjabi Singer, Manmeet Singh, was also killed after he was swept away by gushing waters of a Nullah near Kareri lake where he had gone trekking with his brother and friends on Monday. His body was recovered on Tuesday.

The biggest jolt to Kangra came from Boh Valley in Shahpur constituency of Kangra district where a landslide, triggered by a possible cloudburst, washed away about seven to ten houses completely and buried over a dozen of people, and washed away the main link road to the valley. While six persons were rescued safely, the bodies of five others had been recovered at the time of the filing of this report. More people are missing and teams of the National Disaster Response Force along with local police and villagers were carrying out the rescue work. The landslide hit the village at about 10:30 am on Monday, but the NDRF and other rescue support reached the spot by evening – a delay of several hours. Washed away or blocked roads were cited to be the reason. On the first night, villagers carried out rescue work themselves and managed to get at least four people out alive. Some villagers questioned as to why the rescue teams were not airlifted through a chopper if the roads were blocked.

Himachal Watcher continuously tried to contact the Deputy Commissioner, Kangra, Nipun Jindal, to obtain more facts but did not receive a response.

Chief Minister Jairam Thakur on June 13 carried out an aerial survey and also visited the site of the landslide and spoke to the affected families.

The Chief Minister said that a team of NDRF was coordinating the district administration in rescue and relief works and all-out efforts were being made to trace the missing persons.

MP Kishan Kapoor also visited the spot and took stock of the situation.

Further, the NDRF and district administration had to rescue several persons stranded on an island in the Giri river in the Paonta Sahib sub-division of the Sirmaur district on Monday.

Regions of the Kullu district were also hit by landslides and blockages of roads at a time when the tourist influx was very high. Some areas also reported blackouts.  The body of an MBBS student, who was on a trekking tour with her friends, was recovered from Hamta Pass. Astha Katoch, 23, had fallen into a Nullah. while trekking. The Adventure Tours Operators Association of Manali pointed out that the area is falling victim to mass trekking and a lot of agencies offering trekking tours were flouting rules by bringing more trekkers on tourism than permitted. It’s putting both the safety of trekkers and the environment at risk, the Association said.

Following the disasters in Kangra and Hamta Pass, the district administration of Kullu has prohibited adventure activities till September 15 and issued an alert for adverse weather during the next three days.

Advisories were also issued for tourists and locals to not venture to places vulnerable to natural disasters like floods and landslides and near water bodies.

Other affected districts were Shimla, Chamba, Mandi, and Lahaul-Spiti where roads were blocked and electricity supply was affected due to damages to transformers.

The HP Meteorological Department has issued a yellow alert with a prediction of widespread rains from July 14th to 17th  for the plains and middle hills.