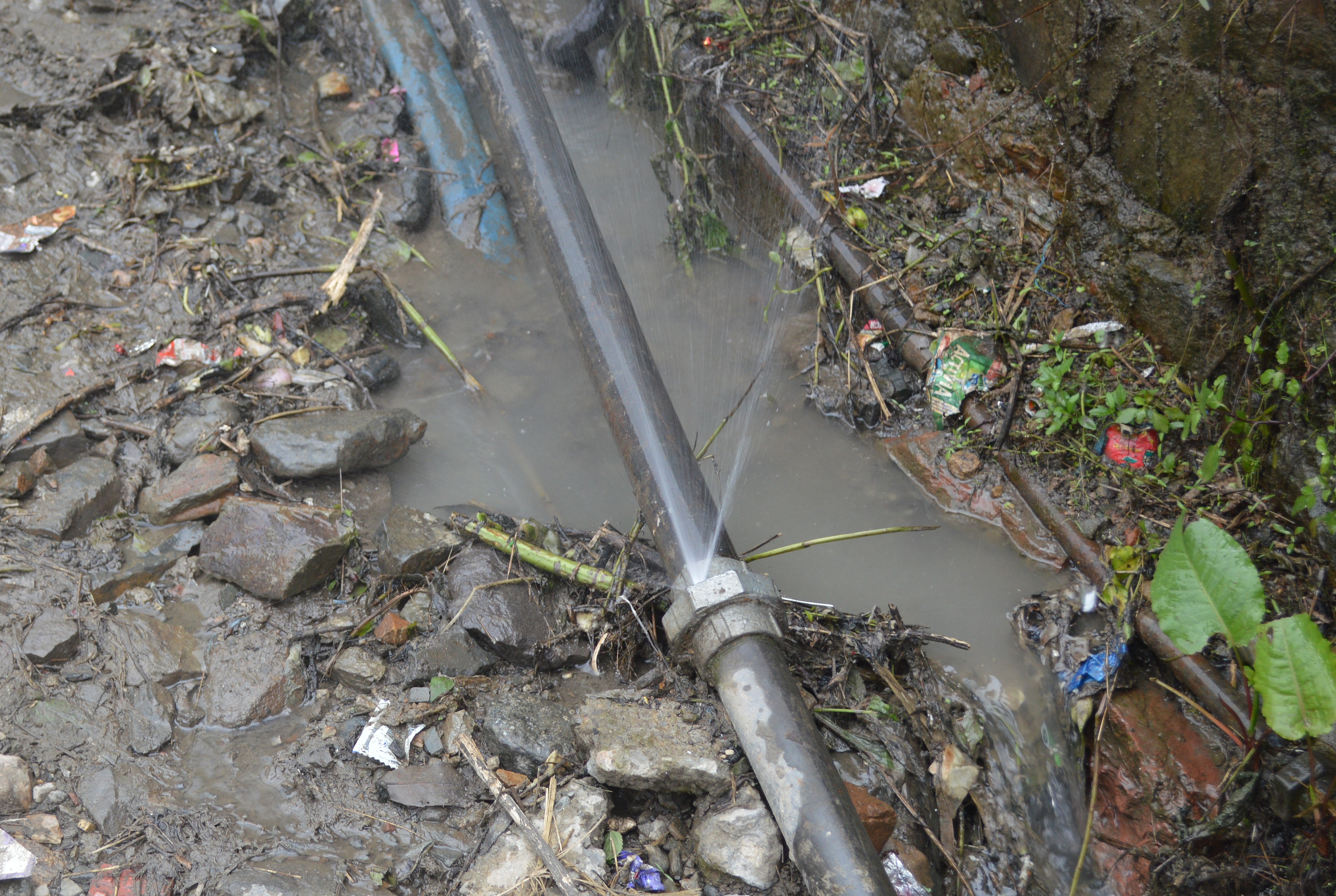 Boileuganj – Shimlaties, here is your drinking water supply, right from a leaking pipe crawling through a gutter. It’s almost a decade that I have been watching this bunch of pipes leaking near Boileuganj except a couple of occasions when the leakage was fixed temporarily. I wonder how much amount of drinking water has been wasted in all these years. The leakage isn’t one-sided. During supply it leaks out water and rest of the time the gutter water leaks in. Sometimes, sewage pipes leak too into the same drain that carries domestic waste water of Boileuganj. The leakage damages the road, makes it slippery and uncomfortable to walk for pedestrians. Many other spots are visible where leaking water pipes share space with drains or gutters. Health department doesn’t mind it at all like rest of us. The environmental NGO’s are in coma, nowhere to be seen raising such critical environmental and health concerns. 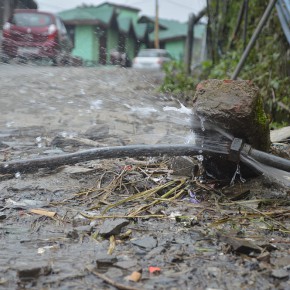 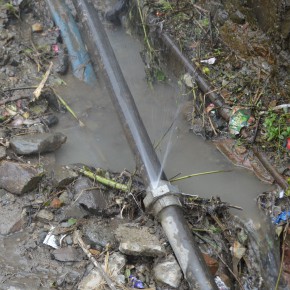 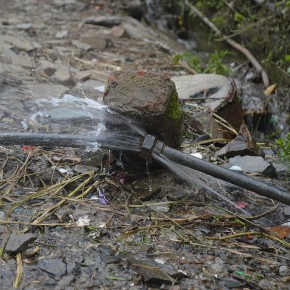 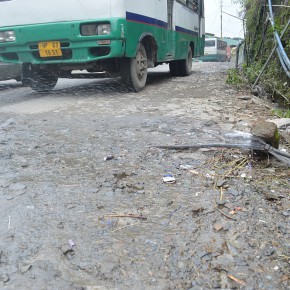 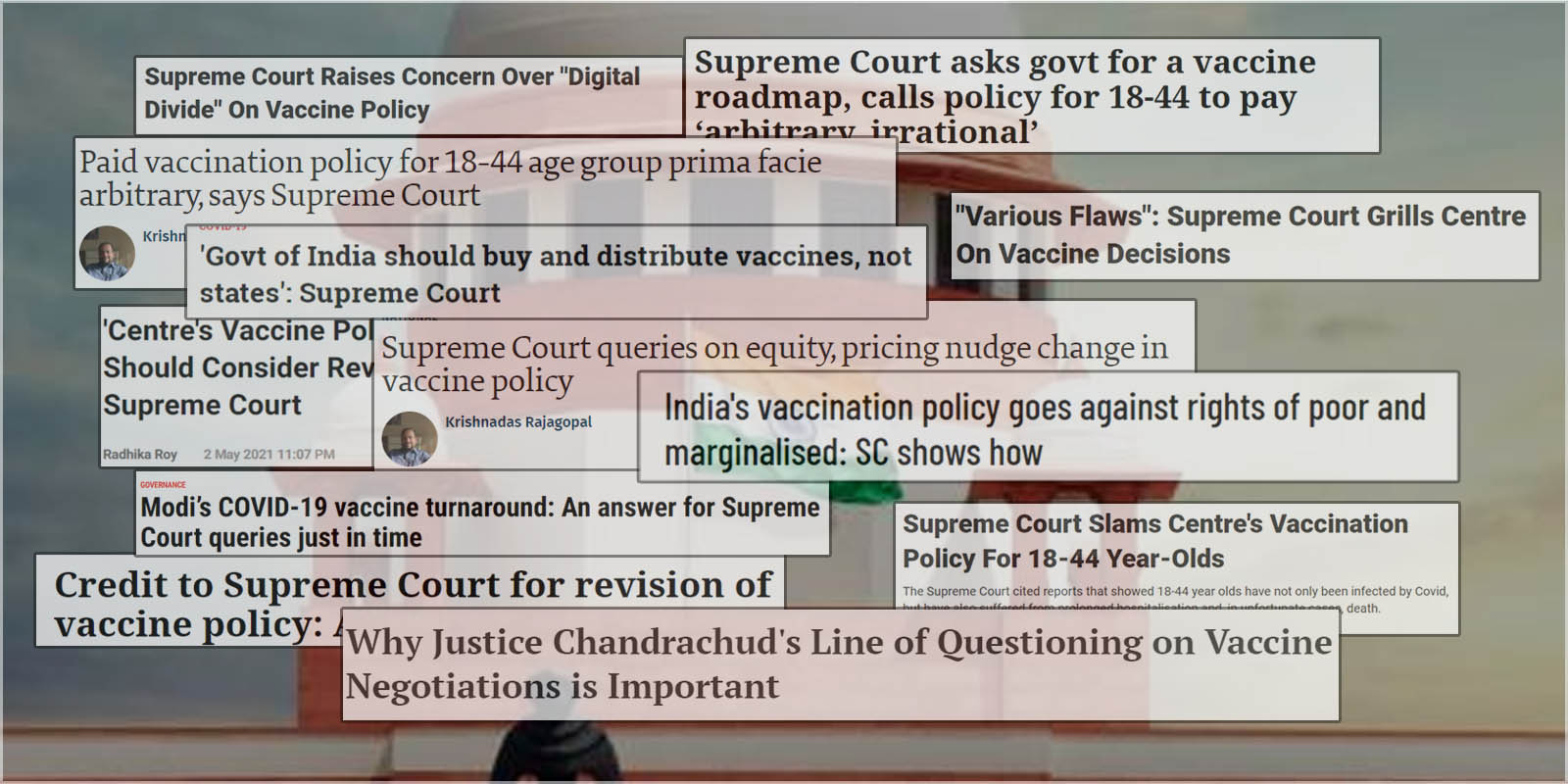 Shimla-Free vaccine to all Indian citizens above 18 years of age would be available from 21st June onwards, the Government of India announced yesterday. The Centre has also announced that private hospitals would not be able to levy arbitrary charges for vaccination and the rate would be fixed. The government also rolled back its policy for procurement of vaccines, which was under heavy criticism not only from the opposition but also from the Supreme Court of India.

Though, the Centre claimed that the roll-back was a result of the demands raised by state governments, but some believe this decision came right after harsh judicial scrutiny of the government’s previous policy by the Supreme Court, whose initiation is being lauded by the citizens of India amid this pandemic.

“Many states came forward with a demand for reconsideration of the vaccination strategy and for bringing back the system that was there before 1st May,” the Centre said while defending the rollback.

Also, the Centre was even objecting to the court’s jurisdiction in matters related to policymaking and had termed it as an encroachment on the jurisdiction of the executive. However, very mindful of its jurisdiction, the court had mitigated this allegation of the Centre by explaining how policymaking is subject to judicial scrutiny. The court made the Centre aware of the ‘dialogic judicial review’, where the Court can question the executive and demand justifications from it over non-conformity of a policy to the constitutional rights.

Furthermore, the Supreme Court had grilled the Union government over its faulty and discriminatory policy as states were left on their own for the procurement of vaccines. In its orders passed on May 31, a bench comprising of Justice DY Chandrachud, L Nageswara Rao and S Ravindra Bhat came down heavily upon the central government. The bench had termed the policy approach as “arbitrary and irrational”  because it did not provide free vaccination for the 18-44 year age group.  The bench had sought clarification on policy and dual pricing in which states were being made to procure vaccines directly from the manufactures and were invariably paying more for vaccines while the Centre procured the same vaccines at lower rates.

“Due to the changing nature of the pandemic, we are now faced with a situation where the 18-44 age group also needs to be vaccinated, although priority may be retained between different age groups on a scientific basis. Hence, due to the importance of vaccinating individuals in the 18-44 age group, the policy of the Central Government for conducting free vaccination themselves for groups under the first 2 phases, and replacing it with paid vaccination by the State/UT Governments and private hospital for the persons between 18-44 years is prima facie arbitrary and irrational” a bench observed while passing an order on May 31, 2021 concerning a Suo moto case on “Re-Distribution of Essential Supplies and Services During Pandemic”.

Further, the court had also expressed concerns over the digital divide which would make accessing vaccine equally difficult for a large section through online registration.

The bench aggressively went on to order the government to share all details of the vaccine purchase and distribution, as well as provide information on how the budget allocated for the vaccination (₹35,000 Crores ) was used.

The Centre said that this policy would be rolled out in two weeks.

“In two weeks, the Centre and states will make necessary preparations as per new guidelines,” the Centre announced yesterday.

Till today, more than 23 Crore vaccine doses have been administered in the country.

To ward off the embarrassment caused by such a contentious policy which was not conforming with the constitutional rights of the citizens, Prime Minister Narendra Modi, without referring to the judicial review, blamed it on the state governments.

“As the corona cases started declining, questions arose about the lack of choice for states and some people questioned why the Central government is deciding everything,” he said.

“India’s vaccination program was run mostly under the Central government. Free vaccination for all was moving forward and people were showing discipline in getting vaccinated when their turn came, amid all these demands for decentralization of vaccination were raised, the decision about priority to certain age groups was raised. Many types pressures were exerted and certain sections of media took it as a campaign,” the PM said.

But with that being said the role of the judiciary in making the government roll back its policy in the interest of the people is being lauded as the victory of judicial review. Also, it has attracted positive response for the apex court which was being alleged of evading several matters related to the public interest under the pressure from the current political regime.

In another major announcement, the Central government announced the extension of the Pradhan Mantri Garib Kalyan Anna Yojana till Deepawali.

As per the announcement, till November, 80 crore people will continue to get a decided amount of free food grain every month. 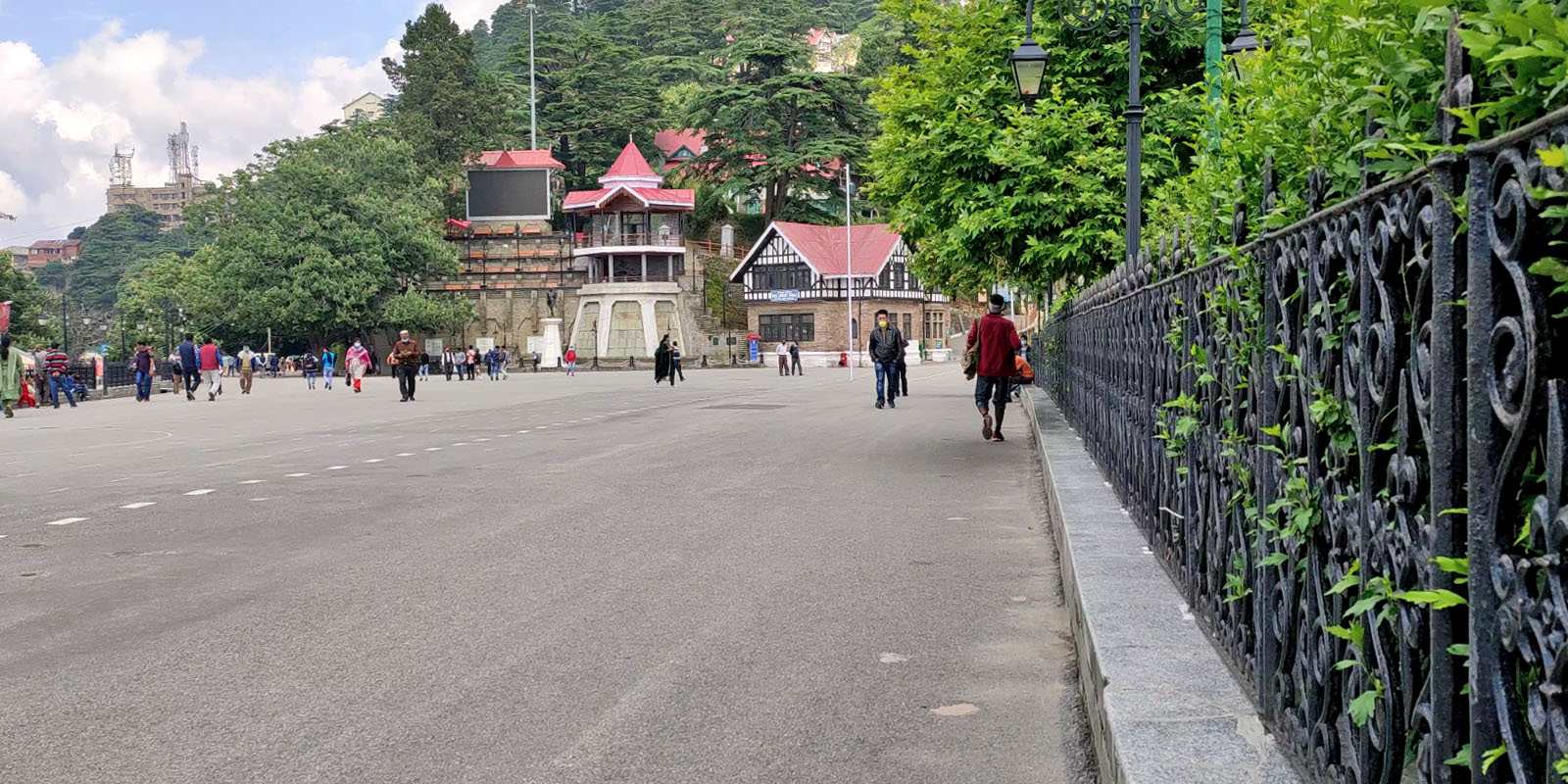 Shimla-Himachal Pradesh Government may not have imposed restrictions on tourist movement, but the industry is facing the heat of second wave of coronavirus pandemic, which has now reached an alarming level.  Alarmed by massive spike in new cases and fatalities, Delhi yesterday imposed a curfew for six days.

Further, with neighboring states including Panjab and Haryana going into a lockdown-like situation with the imposition of weekend curfews, tourist influx in Himachal Pradesh has dropped drastically, hitting the tourism industry in Himachal Pradesh. Last weekend the hotels claimed the occupancy was almost zero. The hoteliers and other stakeholders said the current situation is similar to what they faced during the lockdowns last year. After lockdowns spoiled the peak tourist season of the last year, the industry is hardly in a position to take another blow, hoteliers said.

Conditions in Himachal are no better. In 19 days of April month alone, the state has recorded over 14,000 cases and the infection has claimed 155 lives, which is a massive surge in a very short duration. The rates of the surge in new cases and fatalities have also been recorded to be much higher as compared to the previous year.

The state government on Monday said that all educational institutions of the State would remain close till May 1 2021, and faculty of schools, colleges and universities wouldn’t have to come to duty.

The State Government also decided to put a complete ban on transfers of field functional staff.

Right after getting a nod from the Centre, the state government had also postponed the board and UG examinations.  Further, the HP Board of School Education is reportedly mulling over promoting class 10 students.

Chief Minister on Monday also said that the government could take more decisions to contain the spread in the meeting to be held on April 22. Some media reports said that the state government has hinted at the imposition of a curfew. While interacting to media yesterday, Chief Minister had also said that there are no plans for a complete lockdown, but if the situation continues to worsen, a curfew can be imposed. The Chief Minister had been maintaining that a lockdown would be the last resort as it would hurt the tourist influx, thus, cause economic damages.

However, if the businessmen and hoteliers are to be believed, currently keeping the state open for tourism is hardly providing any relief. Moreover, they are not able to differentiate between a curfew and lockdown. They have begun to seek relief from the state government.

On the other hand, in case the state decides to impose a curfew, the situation would get quite difficult for the poor, especially migrant workers, daily wagers, and small street-side vendors too.

Further, fear of the collapse of health infrastructure haunts the state as the government is still in the phase of passing directions to the officers to enhance the bed capacity in the hospitals.  As per the statement given by Chief Minister on Monday, the state is yet to take steps to ensure the proper availability of oxygen and staff.

“Steps would be taken to ensure the proper availability of oxygen and medical staff in the State.  Bed capacity would be enhanced in Nerchowk Medical College, IGMC Shimla, Zonal Hospital Dharamshala, Tanda Medical College, Sunder Nagar Hospital and various other hospitals. Health workers would be posted in appropriate number for the care of Covid-19 patients,” Chief Minister said.

Chief Minister is being condemned for not completing make-shifts hospitals during the lockdown period along with strengthening the health services the way the it was required.

Moreover, for setting bad examples for the people, all political parties and their leaders, including Chief Minister Jairam Thakur, had faced severe criticism over blatant violation of COVID-19 protocols during campaign rallies for the elections to the Municipal Corporations. As a result, the public is hardly taking the second wave seriously and lowering their guards against the infections, which is only worsening the situation.