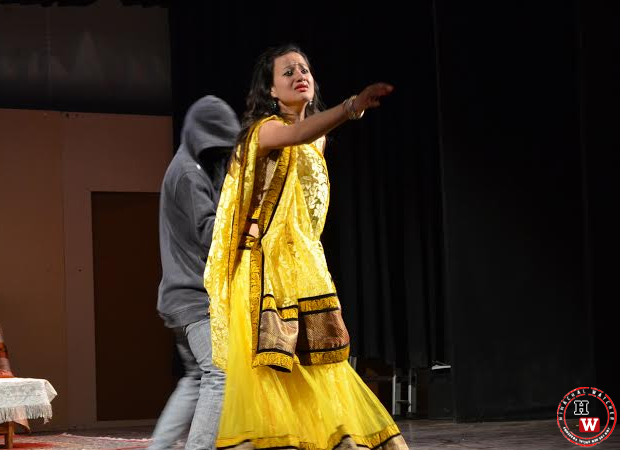 SHIMLA- musical dance play made people contemplate on the real meaning of love and its acceptance in society. Often we sing song Masjab nai seekhta apas me bair kerna; but when it comes to practicality reactions are totally different.

Yesterday people of city got an opportunity to contemplate on the meaning of love via A musical Dance Play “Ishq ya Gunaah”; staged at the historic Gaiety Theatre, Shimla.

The play was organized by the Dream Makers Society and while informing about the it Director of play Ajay Sharma, said that the main objective of play was to raise a question in mind of society where social evils like caste system are still practiced. Originally show was to be staged on Feb 14, when the entire world celebrated the bond of love but unfortunately unavailability of the venue mad e them postpone the show. The story was the play was like any typical inter-cast; here inter religion; love story. A Muslim boy falls in love with a Hindu girl who has lost her entire family in riots. Dishearten from her life the girl meets the young Muslim lad who gives her a new ray of hope. The communities refuse to accept their relation and try to kill them both.

Ten years pass and each one without being aware of other being alive; boy becomes a vegetable whereas girl fulfills his dream of orphanage. In end when girl comes to meet him after learning his being alive, his wait ends and he dies. Considering the first attempt of direction by Ajay, it can be called a good production. It had all the elements that one would like to see in any heart touching love story. The lead actor did a commendable job. He not only memorized the poetry but even delivered it with full spirit. On the other hand the heroine too did a good job. The dance sequences added to the flavor of story. For people who looked for sheer entertainment and not some serious theater it was a treat to watch and value for money. It did take people to a romantic dream world where falling in love is all magical. No doubt the end showed a malicious face of society where emotions take a back seat as compared to false egos. Play gave a message that love is not always about self interest but about the happiness of one u love with or without you. Technically changing of scenes and set in fadeout could have been done little neatly. To take entry from the other wing heroine could have used the passage behind the set rather than walking on stage while rest everything else was settled. It gave an impression that a new scene has already begun which was not the case. Other than that situational songs were well chosen and dance sequences too were executed well but there is always room for improvement. However for one of the spectator and a theater lover, “The lead performances were good only if the director knew what is Film and what is play? Playing filmi songs does not make a theatre narrative! So much is the power of Cinema that today even stage actors aspire to be Bollywood actors where acting doesn’t matter much but the star value on pulling cheap crowds for expensive productions which mostly again goes unto star fees. “