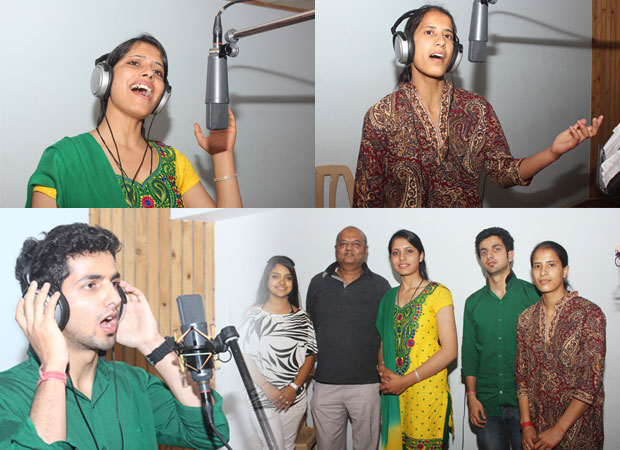 ‘The Cedar Films’ set to organize Season-2 of singing contest in 2014 in Himachal. The auditions to begin in April end. Encouraging hidden singers, dancers, actors of Himachal and highlight it on higher platform is motive of the initiative says organizer.

SHIMLA--Recently, four young singers from Himachal had an opportunity of playback singing for a Bollywood movie. Ankush Bhardwaj (Kotgarh), Vanita Thakur (Arki), Poonam Sharma (Shimla) and Sonam Chaudhary (Shimla) returned back to Himachal from Mumbai after recording for “The Slum Stars” and were very enthusiastic about this experience and their future. Perhaps, it’s the first time that Himachal’s young talent could directly jump onto Bollywood playback singing through a local contest. Behind this opportunity lies the initiative by the ‘Cedar Films’ through its talent hunt contest, ‘Sangam Sur Sangeet Ka’. In 2013, the ‘Cedar Films’ successfully organized the first season of the contest. The organizer held auditions in almost every district, and the final contestants were screened through multiple rounds. Out of total 600 participants from all over the Himachal, five talented singers emerged out as final performers. As capable judges, Kartik Sharma (Voice of Himalaya), Narinder Nittu (Indian Idol Fame and finalist of Awaaj Hindustan Ki), and Sh.Gopal Sharma screened the participants for the finals. The selected five singers performed at Shimla Gaiety Theater. Four talented singers, the winner and the runner ups, made their way straight to the Bollywood. The winner and first and second runner ups were also awarded with Rs. 1 lac, Rs. 50,000, and Rs.20,000 respectively. There were some gifts like computers and smartphones from the sponsors as well. However, more than the monetary awards, what mattered was the opportunity of playback singing with well known Bollywood names like Shahid Malya and Tina Ghai as the Co singers and Iqbal Darbar as the music composer and director for ‘The Slum Star’. Under the banner of K.K.Movies & Media International “The slum Stars” is directed by Rajan Lallyapuri. That was about the last season. The Cedar Films is set to organize Season-2 of ‘Sangam Sur Sangeet Ka’ in 2014. The auditions are likely to begin towards the end of April this year. According to the organizer, the motivation behind the initiative is to bring out the hidden talent of Himachal and highlight it on a higher platform. Further, the ‘Cedar Films’ is looking to do the same for talented actors and dancers as well.

Such a multipurpose platform for the local artists is like a fuel to their talent. Sadly, the state Govt. has miserably failed in encouraging the local artists except some occasional events for the sake of formality to justify the granted funds. Therefore, such events are likely to extend additional opportunities for aspirants in the hill state.

Ishq ya Gunaah: A musical dance play at the Shimla Gaiety