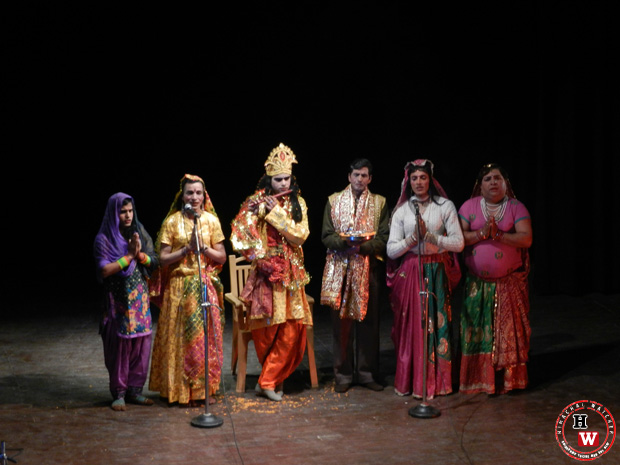 “Mecca of theater” cries seeing the low standers of productions being staged especially in context to celebration “150 years of Summer Capital”.

The much awaited State level theater festival that was announced by the department of Language, Art and Culture; to mark the celebration of “150 years of Summer Capital”; proved to be a damp squib. Phir was a repeat show and as compared to the last time there was hardly in improvement in the play. First half of the play was again a drag and it was only the middle that connected the audiences to the play. Inspite of serious theme of the play it failed to woe the audience due to lack of rehearsal that was quiet evident.

Subhdra was based on the life of Kumari Chauhan can be called a good attempt only considering that performers came from place where theater is getting extinct. Play was too lengthy and majority of audiences failed to stay glued to their seats for the climax. With little diction issues here and there it was an average production. Aah and Typist both productions proved the hindi idom Naam bare aur Drashan chote true. Coming from both directors whose previous productions have delighted the audiences proved to be an utter disappointment.

In order to increase the length of play Aah director added a complete three minutes song plus a dance sequence here and there which left a bad taste. Instead of play the experiment made it look more like a low budget film with dancers shaking their pompoms. While depicting hospital, doctor is standing bare feet. Placing of table and chair wouldn’t have demanded much efforts if the director wanted. Florist presence was well received by spectators making them giggle. Whereas, Typist was again a dull production that failed to do justice to the script it was difficult to swallow that it came from another reputed director of the city. Lack of rehearsal was again seen in the show.

Coming to folk theater, lord krishan is sitting on plastic chair if we are talking folk then these little details should have been considered by the director. However considering the local flavor it managed to bag audiences.
Chriya can be called a good production as the beginning was not so interesting but eventfully it picked up the tempo and captivated the audience. It was symbolic of corruption and miss use of power in our country. Even it was not a flawless performance as the constable comes shouting and jogging left right left but in name of left his right leg is up. Ignoring little flaws it can be called an entertaining show. Finally in end Jungle came as a rescue and honored the World Theater Day. After one another bad productions this play based on Shravanh Kumar’s novel forced spectators to stay glued to their seats. It was a satire on the political governance of our country. With hardly any stage properties actors depicted jungle, TV, different houses of character and Kailash Parvat. It seemed like in name of theater festival a prank was played. Department granted 50, 000 for each production but the results failed to do justice to the grant. As per the director LAC Arun Sharma, a committee was formed that selected the plays that have been staged during the festival. All these productions are further reviewed by selected committee members for national level theater festival to be held in April. The interrogating question is on what basis were the productions selected. As they say people who do not know/ remember their history are bound to repeat it and same was applicable in context of this festival. Just like 21 days long play festival organized previously; (during director LAC Rakesh Kanwar time); same low standards were observed as this time. That time too department gave a handsome amount for production but screening was not done.
Being a state level competition it was just to give all districts group equal opportunity but had all of them been asked to bring more productions; which they could have enacted in front of committee before; out of which the selected committee could have selected for this festival too in best interest of all. After seeing the entire festival it won’t be wrong to say that it would have been better that committee screen all staged productions so that it was able to live up to the standard of the occasion, for which it was planned rather than happy go lucky attitude. The positive point of this festival is the post discussion of plays where each play was scrutinized and people got an opportunity to share their views in front of the reviewing committee of the festival. It is a welcoming change and can help in improving of the theater standards in the city.