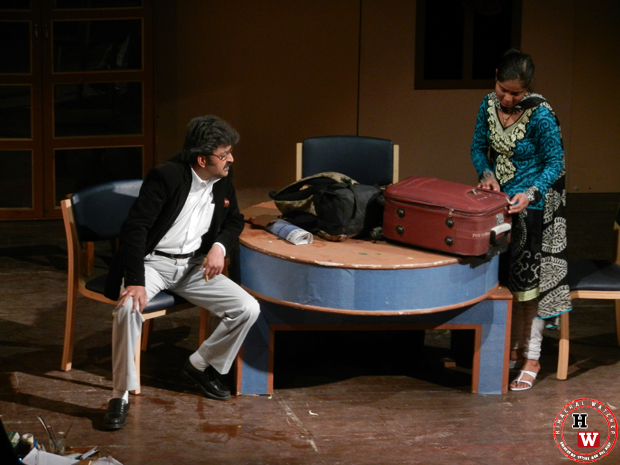 SHIMLA- A refreshing performance was seen by theater lovers in form of “Light Camera and Action”, organized by The Beginners at the historic Gaiety Theatre.

The play was inspired by two writers’ work that is John Osborne’s Look Back in Anger (1956) and Anton Chekhov short story The Shoemaker and the Devil.

The entire play turned out to be a mixed experience as themes of both work failed to jell in the performance. On one hand a love triangle involving an intelligent and educated but disaffected young man who aims to make his mark in the field of performing art, his upper-middle-class, impassive wife, and her haughty best friend.

On the other it was “The Shoemaker and the Devil” is a humoristic morality tale about a shoemaker who dreams about selling his his soul to devil in return of becoming rich. The play turned to be bit confusing for both the stories did not mix well. The Devil part caused interruption in the Look part. It was very difficult to find connection between both the stories. Devil part was all in dim light and the original humour faded out in the experiment.

Many people were of opinion that it could have been two plays rather than experimenting to merge the two stories together.

However, Pooja Rani and Chris did a wonderful job and made strong connection with the audience with their performance. All felt their joy and pain. On the other hand Jazz (stage name) failed to capture the intensity of hitch when Uday’s wife returns home after 2 years. Whereas Devil part here portrayed as media, education, system and business, like said before was way too experimental and became bit heavy to receive. The climax dance of all gave impression of play’s conclusion and all of sudden a guy comes introducing director of play which again turns out to be Uday from other story; while audience is applauding Mukesh – the director of Light Camera.

The transfusion from one scene to another or rather to say from one story to other could have been better. TV commercials and serial was good filler in the play that gave a refreshing kick to spectators; giving them opportunity to laugh. Considering the recent play fest it one can call this play a refreshing break and a good attempt; ignoring too much experiments. Had the advertizing banner been little better, many people wouldn’t have missed the opportunity to enjoy; as book was judged by its cover which gave failed to give a decent message.

Waiting for Godot staged at Gaiety

“Him Rang Mahotsav” – A Damp Squib